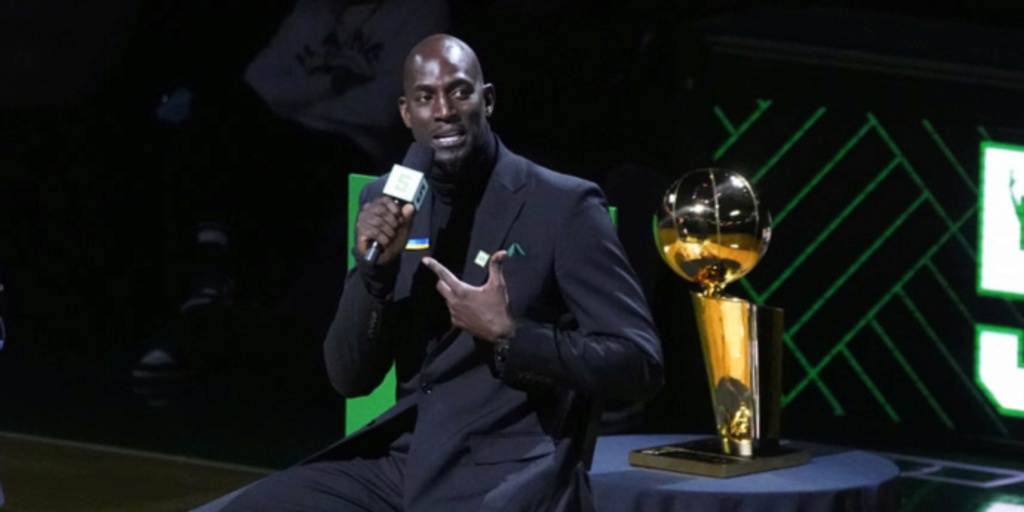 Even after 14 years, I was right at home with Kevin Garnett in Boston

Boston Garden was going crazy because we knew the championship was ours. Guys started celebrating, Paul dumped that red Gatorade on Doc’s head and we all celebrated like 10-year-old kids.

Somehow, it’s already been 14 years since we beat the Lakers in the 2008 NBA Finals, and even after all this time, I haven’t forgotten those moments. It’s like I have pictures ingrained in my head.

And going back to where it all went down to join my teammates to honor Kevin Garnett — even after all these years, man, Boston still feels like home.

I feel so blessed to have been able to play a part in such a great team accomplishing the ultimate goal. And we all felt like we played a small part in Ticket’s jersey getting retired.

Last weekend, I was invited by the Celtics organization to attend Kevin Garnett’s jersey retirement ceremony. It was scheduled to happen during Sunday’s game against the Mavericks, and a bunch of the members of the 2008 team got together and spent the entire weekend in Boston. It was amazing.

It was like the band was back together. Just like old times, I was hanging out, cracking jokes and reminiscing with Paul Pierce, Big Baby Davis and Eddie House. I got to chop it up a bit and catch up with Danny Ainge. And of course, I got to not only catch up with Ray Allen and KG; I got to see them publicly, and once and for all, squash whatever beef they may have had.

About last night. Appreciate the love as always @celtics

Sometimes in life, one tiny decision you make ends up having such a huge impact. Before I signed with Boston, I really thought I was going to New Jersey to play with Jason Kidd and the Nets. But for a few reasons, I ended up heading to Boston instead.

One of the things I’ll always remember about being a Celtic was the fact that when I came to Boston, I was the only player on the team who had already won a championship. Doc would sometimes ask me questions in front of the team and want to get my perspective. He’d ask me about things that Pat Riley preached and habits that Dwyane Wade and Shaq had. He figured that I’d gotten the top of the mountain, so I at least knew what the view looked like, you know?

But even though I had that experience, being around Ticket was just different.

He was so easy to rally around because he made it his personal duty to do all that he could to push everybody around him. And even after all these years, he still has the same unique energy.

When Ticket walks in the room, it’s like you immediately get on guard. He just makes you want to be sharp and on point. He has the same energy today, but it was that times 10 when he was your teammate pushing you on the floor.

Everyone on the 2008 team just has a special love and appreciation for Ticket.

So being able to reconnect with guys that you won a championship with and doing it in honor of someone who helped to bring out the best in you, that just made the entire weekend in Boston all the more enjoyable.

It felt like everywhere we went in the city this past Friday and Saturday, people loved us and respected us and knew us by name. With the Celtics organization itself, they treated us like first-class citizens and made sure we were taken care of.

Not only does Boston remember what we achieved, they will never stop showing us love. And we owe a lot of that to KG. It was nice to see him get the highest honor that an organization is able to bestow on one of its own.

What I’ll remember most from that weekend — aside from Jaylen Brown’s monstrous dunk over Maxi Kleber — was KG shedding tears as he saw his jersey go up into the rafters.

A couple of us, including Big Kendrick Perkins, may have had one or two side bets about whether Ticket would cry. KG himself didn’t think he would crack, but he obviously couldn’t hold it all together, so we at least have something to tease him about the next time we see one another.

When I replay the weekend in my head, though, I kept finding myself thinking about Ray Allen. I was happy to see him there, but wasn’t surprised that he attended.

I knew that everything that was said about him after he left for Miami would eventually become water under the bridge. But I knew that because I was a member of that team. The guys on that 2008 team simply loved each other too much and had too strong of a bond to let Ray’s decision to leave ruin the bond forever. Even as words were exchanged over the years, I had all the confidence in the world that KG and Ray would bury the hatchet, and it unexpectedly happened during KG’s moment.

While being interviewed during his jersey-retirement ceremony, out of nowhere, Ticket basically interrupted the interviewer just to say that it was good to see Ray there. Everyone started cheering before the two met at halfcourt and hugged.

As great as he was, Ticket was truly unselfish. So I guess it was fitting for him to share his moment in the spotlight with Ray and finally, publicly, squash the beef.

Nothing says “brother” more than that.

I think what most people don’t really understand about being a pro athlete is how strong the relationship between teammates can become. The longer guys are together, the deeper the connection usually gets. And when you actually have success as teammates and when you win a championship together, it’s almost as if the bond is solidified. And I speak from experience. Not only do you become members of an elite fraternity together, you helped one another get there.

Deep down inside, I think Ticket and Ray both had those feelings about each other.

After what’s been said over the past few years, that was a beautiful thing to witness, and I’m happy I was there in person to see it.

I’ll never forget seeing KG and Ray hugging and jumping up and down at halfcourt at TD Garden back in 2008. It truly feels like yesterday.

In honor of Kevin Garnett — our leader and the engine that pushed that team — no other Celtic will ever wear No. 5.

I’m proud to call him a friend and a teammate, and even prouder to see him receive the ultimate honor.

Fortunately, I have some new memories that I’ll forever cherish.