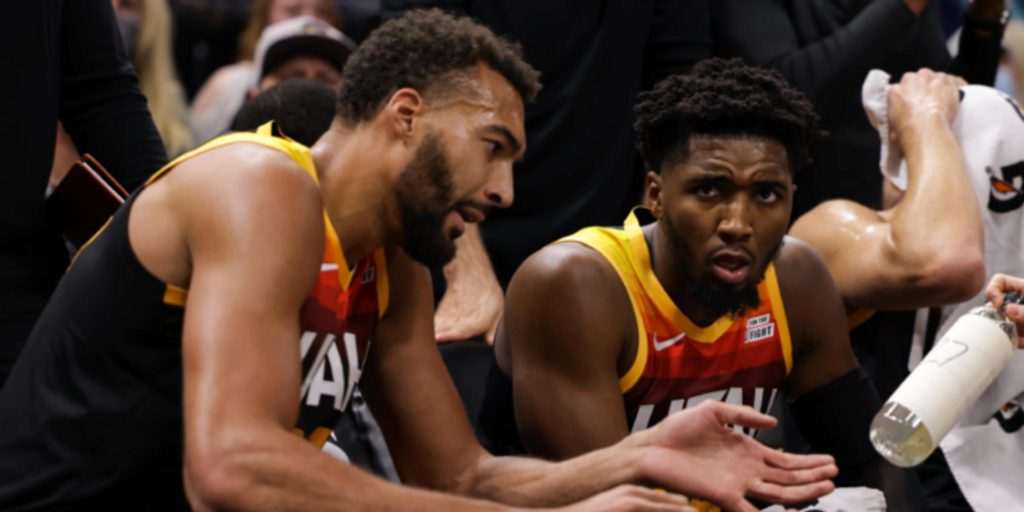 Mitchell says everything is okay with Gobert, Jazz — but for how long?

For multiple years now, reported tension has been bubbling under the surface between the Utah’s Jazz superstar duo in Donovan Mitchell and Rudy Gobert. Whether it be pointed remarks via media scrums or passive-aggressive remarks to one another, many teams have been eyeing Salt Lake City as the next place to watch for a potentially disgruntled All-Star.

Mitchell is one of the most promising age-25 and under scorers in the NBA. Possessing unreal athleticism and three-level scoring capabilities, Mitchell has shown on multiple occasions what his ceiling outcome could look like. Meanwhile, Gobert is a three-time Defensive Player of the Year winner. The way Gobert’s presence simply impacts one side of the court is truly incredible, which is why he’s changing the game for defensive-related accolades.

This week, Mitchell sat down with Yahoo Sports’ Chris Haynes on his Posted Up podcast to go over his relationship with Gobert, plus countless other topics.

“I think it's interesting that — first of all, we're good. I just want to go on record of saying that,” Mitchell said when asked about his relationship with Gobert. “But I think it's interesting that that stuff happens and him and I have never played at this high of a level together since we've been here. So I make the joke — for a group that hates each other, man, we're playing pretty well. And we can be even better.

"So for me, it's like we're good, we're focused on winning, we're working towards a common goal, and like I said, it starts at me and big fella. If we want to get to ultimately win a championship, it's going to start with us. And reports are going to be reports, people are going to say what they want to say and if we win a championship, then there's really nothing to be said. So that's the goal. And we're good. As teammates we're good, we're ready to try and find ways to win. Because we've made it to the first round or second round since we've both been here and we're looking to do bigger things.”

After a surprising slump last month due to injuries ravaging their roster in the short-term, the Jazz have caught fire as of late. Winners of six straight in relatively emphatic fashion, Utah is catching momentum at such an ideal time to rebound back in the Western Conference standings. Currently, the Jazz check in as the No. 4 seed with a 36-21 record.

As Mitchell alluded to Haynes, though, going much further than before and winning something much more are the most important goals right now. Utah wants to get over the proverbial playoff hump, one that keeps getting in its way every time. This could be the main reason why many believe there’s tension within the Jazz’s locker room between their two most important pieces.

“I mean, I said it in the conference. People have their own way of expressing things,” Mitchell said about Gobert. “I think the bigger way would have been just do it in house, but it's water under the bridge for me now, for us as a group. That's just how he chose to address it. Like, whatever.

The Mitchell-Gobert dynamic has been fizzling for a few years, which led to Haynes’ questioning on the situation. With two players taking up a good chunk of their salary cap, would the Jazz's potential issues lead to choosing one over the other down the road? Mitchell put it simply as two hyper-competitive stars who want to take the Jazz to new heights. In this year’s hierarchy in the West, they have to make up ground with true championship contenders like the Phoenix Suns and Golden State Warriors.

"I would take that as opposed to two dudes who just want to sit on their ass and do nothing. You know what I mean? You have two guys who are going to go out there and compete. He's a three-time Defensive Player of the Year, I'm a three time All-Star, we're going to find ways to get better individually and collectively as a group. [David] Locke told me this, we're top five in pick-and-roll together because we understand each other, we understand each other's tendencies and habits and finding ways to get better.”

For the Jazz to break through their ceiling and finally hoist the Larry O’Brien trophy, they will have to see Mitchell and Gobert iron out these longstanding moments of tension. Although Mitchell is saying everything is fine, these murmurs have been out in league circles for years now. Where there’s smoke, there’s usually fire. Is that the case with Mitchell and Gobert in Utah?

On the court, Utah fits right into the middle of potential winners of the West. Phoenix and Golden State sit up top. The Memphis Grizzlies have leapfrogged Utah and others for the No. 3 seed, leading this tier of playoff competitors.

Behind Memphis, all of the following teams feel like they’re in the same position for chasing a championship in 2021-22: Utah, the Denver Nuggets and Dallas Mavericks. And honestly, it feels like the Nuggets and Mavericks could both jump ahead of the Jazz depending on how the season finishes.

If Jamal Murray returns, Denver is going to be such a tough out with defending MVP Nikola Jokic playing at an unreal level once again. After Dallas traded Kristaps Porzingis, Luka Doncic is going to play a James Harden-esque role from a usage perspective. Can Doncic singlehandedly carry the Mavericks past a team like Utah?

The Jazz are in such an interesting position not only this season, but over the next few years as well trying to capitalize on their championship window with Mitchell and Gobert. If Utah continues to go nowhere in the postseason, serious questions will eventually need to be raised about its inside-out duo.

In the meantime, everything remains under the surface, as eyes continue to wander out towards Salt Lake City checking in on the long-term futures of Mitchell and Gobert.