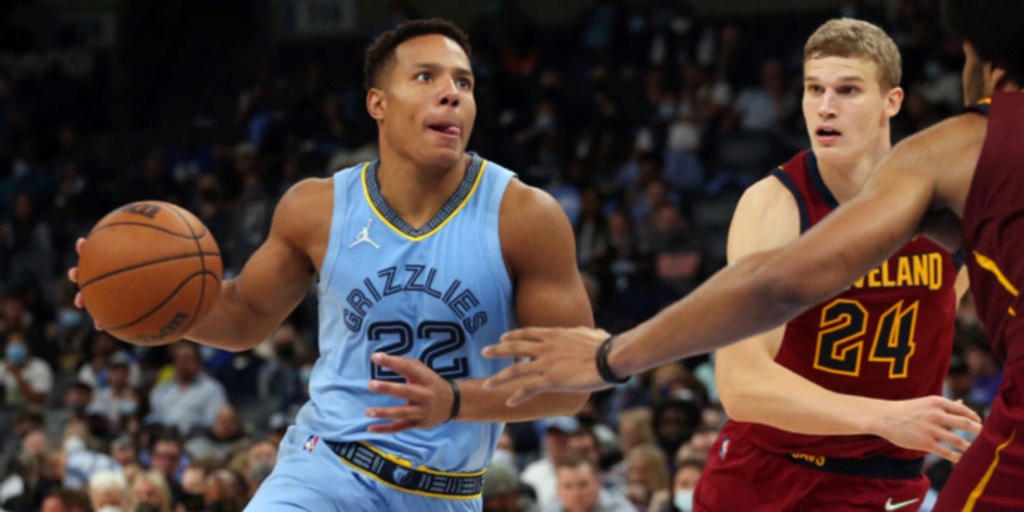 The second quarter between the Memphis Grizzlies and Portland Trail Blazers has just begun. Tyus Jones is getting a breather and Ja Morant is sidelined due to a sprained knee — that means Desmond Bane is captaining the offense.

He kicks off the scoring with crafty, methodical maneuvering to finish out of the pick-and-roll. Then, he creates space for a step-back three and drills it over Anfernee Simons. Next, he slings a pass to Jaren Jackson Jr. and sets up a drive for the and-one. Finally, he’s patient with a ball-screen, draws two bodies toward him and whirls a feed to Xavier Tillman in-stride for the bucket.

Among others, Bane was responsible for buoying Memphis without their star guard, and is a chief reason this team sits fourth in the West at 19-13, two-and-a-half games clear of anyone else.

He’s climbing the offensive hierarchy as well. Not only has his usage ballooned from 14.7% to 20.6% (via Cleaning The Glass), Memphis is allocating him more on-ball reps than last year, and he’s thriving in that role.

Among 103 players with at least 75 pull-up attempts, Bane’s 51.9% Effective Field Goal Percentage ranks ninth, per NBA.com. A season ago, under the same criteria, he was 115th among 187 players at 44.1% eFG. He possesses a dazzling step-back, calmly paces himself in ball-screens to find room and buries buckets with a pop-gun release.

Bane’s growth is helping fuel the Grizzlies’ top-five offense and mitigating the effect of Jonas Valanciunas’ departure this offseason — a stalwart in the middle who shouldered a prominent scoring load and provided defensive stability over his Memphis tenure.

Part of what makes Bane so critical to the team's efforts is his on- and off-ball duality, capable of creating and scoring in a variety of ways. When guys like Jones, Morant, Jackson or Dillon Brooks seek to ignite offense, Bane is entirely able to threaten defenses off-ball. If it’s his turn to cook, he can happily oblige.

After shooting 45.1% on spot-up triples last season, he’s remained blistering hot at 42.4% this season. With economical routes around screens — ensuring his defender will struggle to stay attached — and masterful footwork to concisely orient himself toward the hoop, he’s a stellar movement shooter who’s comfortable sprinting into attempts.

He also owns one of the most lethal shot fakes around the NBA and routinely manufactures space with it. When defenders aim to deny him the ball, he’s a shrewd cutter. His on-ball exploits are new, but the off-ball chops have always been present — they’re just magnified in light of his expanded role, and render him deeply invaluable to the Grizzlies’ offense.

Although the longball is Bane’s primary means of production, he still offers notable equity as an interior scorer. His 51.8% clip on twos is slightly below the NBA average of 52.3%, but is a tad higher than last season’s 51.3%, even though his proportion of assisted twos has dipped from 70.9% to 58.3%.

Positive development is the name of the game for anyone, especially those on rookie deals, and that’s exactly the case with Bane’s scoring inside the arc this season.

Many of the superlatives evident in his pull-up and off-ball merits translate here: savvy footwork and screen manipulation, and an assured cadence undeterred by defenses. To reduce the impact of his unspectacular burst and handle, he leverages all of those skills and consistently scores in the paint. Look at how often he ventures where he wishes, despite the speedometer never reaching double-digits.

Tabbing one player or factor as the unsung hero for the Memphis Grizzlies' run this season is a frivolous exercise. There are a number of credible options: Morant and Jackson’s rise to (or near) stardom; Brooks’ two-pronged effervescence; the steady reliability of Jones; wide-ranging depth to weather injury storms.

Bane, though, is certainly a finalist for any such award. He’s slid into the starting five without a hitch, and invigorates the offense via staunch off-ball wizardry and newfound on-ball profits.

The Grizzlies’ recent resume in the draft is sterling, and Bane, the 30th overall pick last November, is more evidence of that fact. Becoming a rotation player as a late first-rounder is encouraging. Becoming a viable starter who provides offensive versatility like he does is typically a pipe dream.

Yet, that’s exactly what he's doing, and it’s simply another reason for excitement about the short- and long-term happenings for this team.