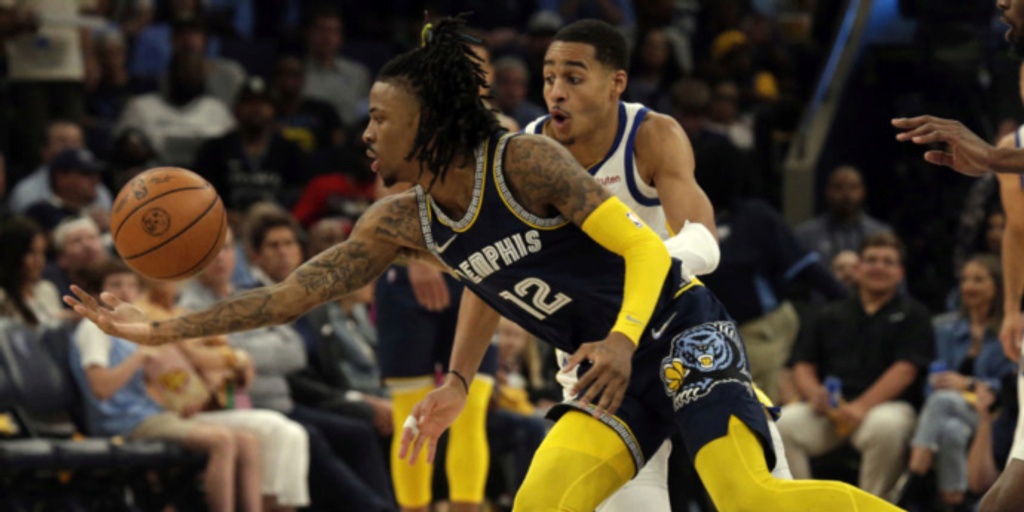 Did Jordan Poole 'break the code' and hurt Ja Morant in Game 3?

In Game 2 of the Western Conference Semifinals between the Memphis Grizzlies and Golden State Warriors, Dillon Brooks committed a flagrant foul that caused Gary Payton II to fall and fracture his left elbow. Brooks was ejected and suspended one game, and Warriors head coach Steve Kerr blasted Brooks after the game.

“I don’t know if it was intentional, but it was dirty,” Kerr said. “There’s a code that players follow. You never put a guy’s season or career in jeopardy by taking someone out in mid-air and clubbing him across the head and ultimately fracturing Gary’s elbow... He broke the code. Dillion Brooks broke the code."

Now, after a Ja Morant injury in Game 3, the Grizzlies have accused the Warriors of breaking the very same code.

Morant had to exit Game 3 with a knee injury, and the replay showed Jordan Poole grabbing and pulling Morant’s knee. Is that what ultimately caused Morant's injury? Ja seems to think so, as Morant tweeted (and later deleted) the following video with the caption, “broke the code."

Poole told reporters that he hadn’t gotten a chance to see the replay. After watching the video, he defended himself.

“Yeah, it was a basketball play when we doubled him, and I hit the ball and I was going for the ball,” Poole said. “I mean, obviously you don't want to see anybody get hurt. I'm not even that type of player. I respect everybody. So I mean, obviously, hopefully he gets better, and we can see him out there next game. I don't even play like that, for real. That's not my type of game.”

When asked specifically about Morant’s “broke the code” tweet, Poole refused to engage.

“We've got another game on Monday,” he said.

Some Grizzlies players and coaches were frustrated and felt this was a dirty play.

“We just watched the replay: He was going after a dribble and Jordan Poole actually grabbed his knee and yanked it, which kind of triggered whatever happened, so I'm actually going to be very curious to see what happens after that,” Grizzlies head coach Taylor Jenkins said. “There was a grab. I'm just curious what happened.”

“It's unfortunate. Ja is obviously having a great series,” Desmond Bane added. “For something like that to happen, something that is somewhat controllable... Jordan Poole reached out and grabbed his knee and kind of put him in an awkward position. It's unfortunate.”

The Warriors argued that the play wasn’t intentional or dirty, with Klay Thompson even laughing when asked about Morant’s tweet (and taking another shot at Brooks).

“That's playoff talk,” Thompson said. “Me personally, I've been through a tough knee injury, and I don't think there's any malicious intent from Jordan. I don't even think he's strong enough to affect somebody's knee. But we're not out there trying to hurt people or trying to club people in the back of the head on a fastbreak. We play the game the right way and I'm going to have his back.”

If you think Poole’s tug is what caused Ja’s knee injury, stop. Not nearly enough force to cause it & seconds prior Poole’s knee hits the outside of Ja’s which can cause medial (inner) stress on the knee. That’s where Ja & the training looked to be examining.

“It's unfortunate that that's a conversation right now because obviously nobody wants to see anybody get hurt,” Stephen Curry added. “But there's nothing malicious about what Jordan did. There's no comparison to what Dillon did or Draymond [did], nothing in that vein. So it's not a joking matter that Ja is hurt, but all the rest it is total BS in terms of the conversation right now. I remember that term they came up with: ‘hot-stove contact.’ That's what it felt like. Keep it moving.”

Draymond Green thought they bumped knees, then added: “No, [we’re] not going to sit here and go tit-for-tat. We've got a basketball game to try to win on Monday.”

However, Memphis is a very well-rounded, deep team that managed to go 20-5 without Morant this season. His teammates know that he’s going to do whatever he can to take the court on Monday night.

“I mean, we've seen Ja, he's like Wolverine out there,” De’Anthony Melton said. “He could be limping one day, the next day be fine. He's a warrior. He's a competitor. He's just a hooper. Who knows what his level of injury is at? He understands his body, and he understands what the team needs, so he'll make the best decision.”

“He's good,” Jackson added after speaking to Morant. “He's going to do whatever he's got to do. War mentality. He has the same mentality he always has. Yeah, we'll bounce back, play great. We've got to finish the game.”

Game 4 between the Grizzlies and Warriors is tomorrow at 10 p.m. ET. Golden State leads the series 2-1.