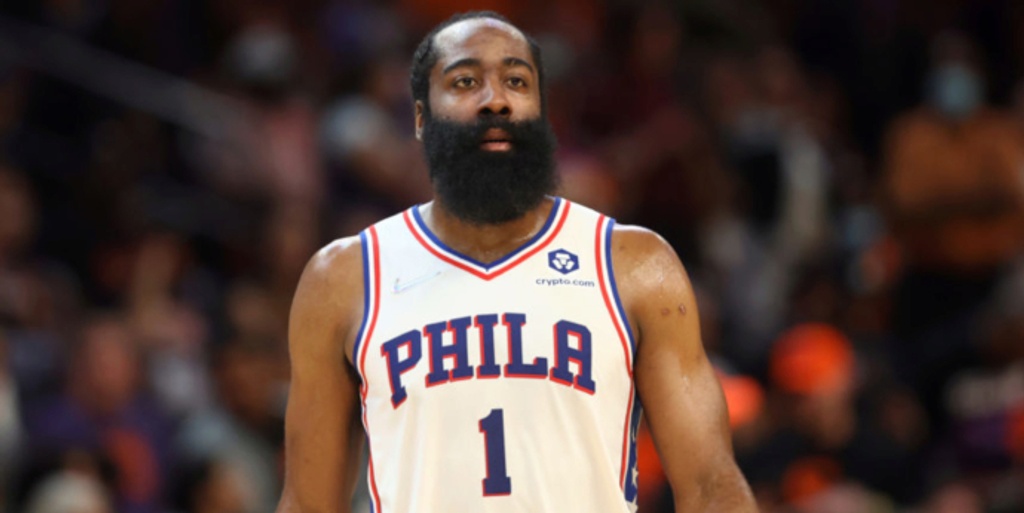 Despite his remarks, James Harden actually has quite a bit to prove

Suitcases are packed, and passports are in tow. The Philadelphia 76ers will soon be heading to Canada to do battle with the Toronto Raptors in this year's NBA Playoffs.

Best believe, no matter how lightly he packs, it is James Harden who will be carrying most baggage, even if he doesn’t want to admit it.

Ahead of Saturday’s playoff matchup in which the Sixers will play host to the Toronto Raptors, Harden has been consistent in stating that he doesn’t feel any pressure heading into his first playoff series as Joel Embiid’s running mate.

“There’s nothing to it,” he said to ESPN, just days after he declared to Complex that he had, “Nothing to prove.”

Not even Harden himself believes that. That is, assuming he gives one iota about the legacy he will eventually leave.

Named MVP in 2018, the 32-year-old Harden is a 10-time All-Star and six-time All-NBA First Team Member. He’s one of the most talented players of his generation and one who has helped revolutionize the way the game is both played and officiated today.

Despite being able to boast those facts, if things ended for Harden here and now, he would only be remembered by future generations as another “superstar” who ultimately wasn’t able to deliver when it mattered most. Fair or not, he wouldn’t be considered among the likes of Charles Barkley, Allen Iverson or even, perhaps ironically, Chris Paul.

Each of those three players have proven histories that show they were not only winners, but that they managed to get every bit out of their potential. They showed up, every single day.

Can the same be said of Harden?

As a basketball-viewing public, we are in an era where individual greatness is ultimately defined by someone’s ability to deliver championship-level performances, if not championships. The perception (whether true or not) is that Harden hasn’t done that. What he’s mostly remembered for today is quitting on each of his last two teams. That, and a rather shabby playoff track record.

To his credit, in his eight years in Houston, Harden did get the Rockets out of the first round five times, reaching the Western Conference Finals in 2015 and 2018. But is that good enough? Do people remember that he lost twice to the dynastic Warriors? Do they even care?

Or do people more remember Harden for his five dubious Game 7 performances? In those contests, he shot a combined 37.4% from the field and also happens to have a higher regular-season scoring average (24.9) than playoff scoring average (23.3). If you check the tape on the greatest of Harden's contemporaries — Giannis, Curry, LeBron and Durant among them — you’d see that this isn’t the norm.

In the end, sadly for Harden, the scoring titles, incredible individual performances and career accolades ring a bit hollow. Not only because he hasn’t been able to win a championship, but because, on an individual basis, he has faltered so tremendously on the quest.

Once upon a time, we said similar things about Dirk Nowitzki and Paul Pierce. To a lesser extent, we at least questioned the true greatness of Kevin Garnett. In the end, they were able to write final chapters that mostly made us forget about their earlier shortcomings. They reinvented themselves and changed their legacies. The aspiration is what brought Harden to Philadelphia to in the first place.

On the precipice of his first postseason run with MVP candidate Joel Embiid, Harden can only hope that his career trajectory in Philadelphia emulates that of his new teammate. Through his first eight seasons as a professional, the hallmarks of Embiid’s still-young career have been about working harder and doing more. He just secured his first scoring title and has a legitimate shot at dethroning reigning MVP Nikola Jokic for that accolade. He’s looked almost as dominant as an in-prime Shaquille O’Neal and will now attempt to lead the Sixers to the franchise’s first Eastern Conference crown in over 20 years.

That, Embiid knows, will require Harden to play at a high level.

James Harden discusses shooting struggles: "I'm one of the most confident players in this league because I put the work in." pic.twitter.com/YdbevAOCZW

"I tell him to be himself,” Embiid told ESPN. “He just has to be himself and not worry about people talking about pressure. Whatever happened in the past, you look back at what he's accomplished and what he's done, he had to play against a dynasty… Bad timing. But I'm sure it's going to be fine."

For Embiid’s sake and that of the front office in Philadelphia, we can only hope his words are prophetic.

Whether James Harden cares to admit it, there’s a lot riding on his marriage with Joel Embiid. Not the least of which is James Harden’s ability to write a final chapter devoid of postseason shortcomings.

With all his baggage, Harden forced his way to Philadelphia.

Passport in tow, baggage checked, as he prepares to head north to Canada next week, the hope for Harden is that it will be just the first of many postseason trips that the Sixers will be taking.

Truth be told, Harden's legacy depends on it.