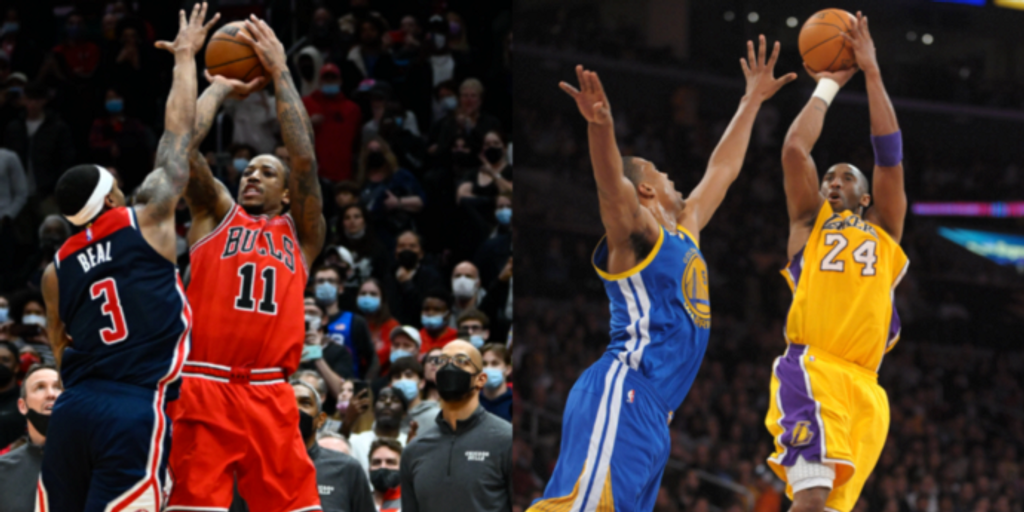 There’s a reason DeMar DeRozan inherited Michael Jordan’s locker. Besides Kobe Bryant, Jordan’s greatest student, DeRozan’s game might be most similar to MJ's since he retired. In fact, you could feasibly draw a line in terms of playstyle from MJ to Kobe to DeRozan.

And with the latter two, not only do Kobe and DeMar share similar playing styles, but they have nearly identical statistics at the veteran age of 32.

With that said, the patterned game and almost exactly the same impact on the stat sheet don’t quite show the whole picture. Kobe was the league’s most feared offensive weapon, piling up a total of 37,366 minutes and scoring 25,790 points before the 2011 season even commenced. DeRozan had only played 30,046 minutes and dropped in 17,751 points before 2022.

That doesn’t even begin to mention playoffs, where DeRozan has yet to channel any version of an "inner Kobe," while the Black Mamba himself had just come off three straight Finals appearances at the time, winning the last two against the Orlando Magic and Boston Celtics.

And let’s not get started on defensive intensity...

But are the similarities really that much of a shock since DeRozan has openly admitted to developing his game with Kobe in mind?

“For me, Kobe was my imagination… Kobe was the one I gravitated to," DeRozan said on All The Smoke with Matt Barnes and Stephen Jackson in Dec. 2020. "For me, to see the start, the fails, I remember begging my dad to get a newspaper just so I could see what he said after the game.”

Knocking down game-winners on back-to-back nights will get people talking, and his teammates have trusted him from the very beginnning.

Lonzo Ball has already said DeRozan is “the best mid-range player” in the league. And since he is hitting shots from that area at a whopping 54% clip, DeRozan is right there at the top of the NBA in mid-range threats with the possible exception of Kevin Durant. DeMar has even been a little more efficient than Kobe’s 51% clip, but missing shots here and there was always something we let Kobe pass on because of his innate ability to make them when they counted — almost like this Bulls run is doing away with the memory of DeRozan getting benched by his own coach in playoff fourth quarters not so long ago.

So their stats are almost identical, but the places in their 32-year-old seasons definitely. Nevertheless, being mentioned in the same breath as Kobe "Bean Bryant" is never minor.

Now, with over one-third of the NBA in "health and safety protocols," it would be a miracle for a player to play in every game of the season these days, so that's something DeRozan won’t one-up Kobe on any time soon by circumstance.

All that remains to be seen is the playoffs. Can DeMar DeRozan finally make an imprint on a deep playoff run, or will it be more of the same as we saw in Toronto?