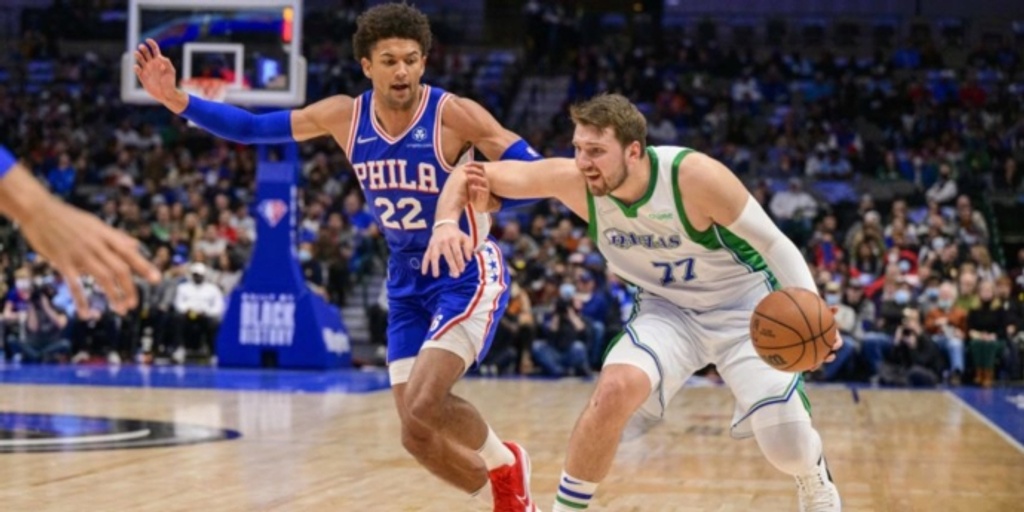 Cornered: How Luka Doncic toyed with the Sixers

Did you stick around for the Luka Doncic show on Friday night?

It's understandable if you didn't, considering the what-felt-like-hours delay midway through the first quarter. There was an issue with the rim, and it's fitting that Doncic -- the man that seemingly sees everything on the court -- was able to point out the defect after making a three pointer.

The game would eventually resume, and Doncic would dominate. 33 points were scored, 13 boards (three offensive) were grabbed and 15 dimes were dished in the Mavericks' 107-98 victory over the Philadelphia 76ers.

If I were to pinpoint one thing from Doncic's night, it's how he made the opposite corner his personal playground in pick-and-roll. Good pick-and-roll playmakers read what's in front of them; guys like Doncic read the third player, the unlucky fella tasked with providing help on the main action.

It's hard out here for a weakside defender, especially when toggling help responsibilities from a single side. Cheat inside too early, and you risk having a pass tossed behind you for a three. Stick to your guy too long, and your center is shooting you angry looks for not helping him on a lob.

Put another way: being in two places at once is really freaking difficult.

The delay got most of the early attention, and Doncic's play afterwards (and the Sixers completely melting against a zone at the end) got the attention late. What if I told you that a broken possession was a precursor to Doncic's big night?

What's easy to see: Matisse Thybulle showing you why he's one of the best defenders in the sport. It's not easy to stick with Doncic, and it definitely isn't easy to guess what he wants to do and time it correctly. Thybulle does all three, sensing the lob to Dwight Powell coming (Joel Embiid is a smidge too high) and getting the deflection.

What's key to this possession is Tobias Harris. While the ball screen is happening, Harris fully commits to tagging/providing relief on the roll, though a half-beat late. Dorian Finney-Smith lifts from the corner to the wing at the same time Doncic is working himself downhill. That lift is designed to put helpers in pick-your-poison situations. 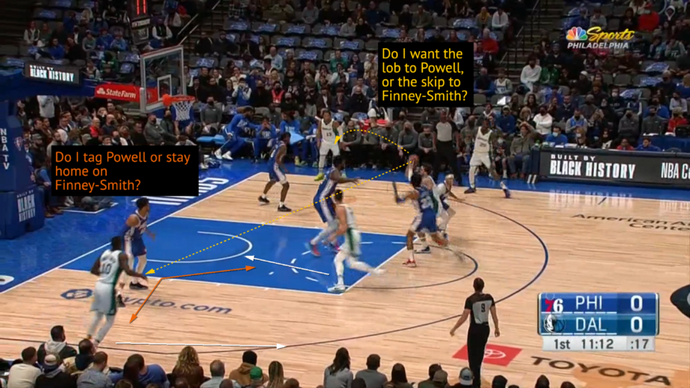 So as Doncic recovers the ball and does his dance — a pump-fake to get Embiid and Thybulle in the air, then a gather to force Embiid and Harris to commit to him and Powell respectively — Finney-Smith is left all alone.

And that, my friends, is the opening salvo of the corner-help battle. With this broken-but-fruitful possession in mind, you're able to better appreciate some late-game nastiness from Doncic with a similar setup.

Poor Tyrese Maxey was caught between a rock and a hard place in the fourth quarter of this one. The Mavs stashed Reggie Bullock — a career 38.5% three-point sniper, and 43.3% marksman from the corners — in the left pocket to put Maxey in the same dilemma that Harris was in.

The first go around, Maxey picks Door No. 1. With the Sixers opting to play Embiid higher against screens at this point of the game, it was even more prudent to make sure the roll-man was accounted for.

You can see the strain, right? Maxey is already keeping tabs on Powell. Doncic exacerbates the issue; he doesn't just string out the hedge from Embiid, he drives past it. Maxey has to commit at that point, which leaves Bullock open for three.

(Also, I love the "exit screen" — set by Finney-Smith for Jalen Brunson — thrown in to take away Harris as a helper.)

On the very next trip, Maxey picks Door No. 2. Well, kind of. He's torn based on the last possession, and that hesitation is all Doncic needs to fire a dart inside.

I love how early Luka pulls the kill switch on this. He doesn't even attempt to drive past Embiid this time. He strings it out just enough, and makes his move early once he recognizes how much much space Powell has due to Maxey's hesitancy. 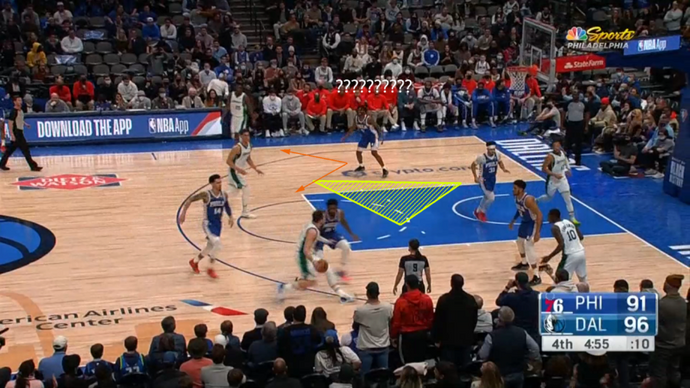 In all, the Mavericks scored a blistering 1.6 points per possession on Luka-led ball screens featuring that corner-to-wing lift, per Second Spectrum. It was one of the high marks of the season, if you care about that kind of granular thing.

Beyond that, it just goes to show how difficult it is to deal with Luka when he's rolling. He's always thinking two frames ahead. Even if you guess right, he can still make you wrong with elite ball placement and velocity.