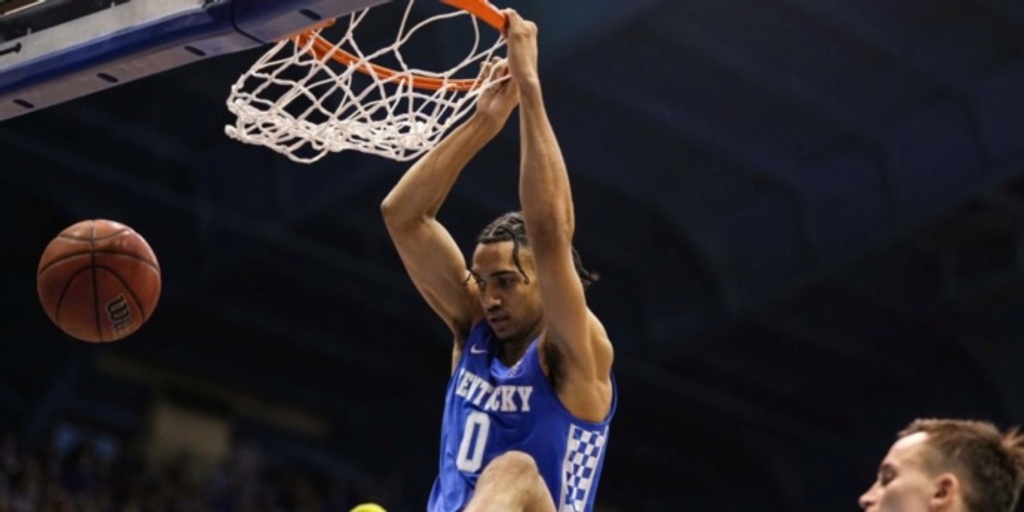 Lawrence, KS  -  Kentucky marched into Allen Fieldhouse and did what no one ever does - had their way with the Jayhawks, winning 80-62. Keion Brooks Jr. picked apart Kansas’ triangle-and-two defense all night and led all players with 27 points. Oscar Tshiebwe also had a phenomenal game in posting 17 points, 14 rebounds, 4 steals and 1 assist.

The Wildcats (17-4, 6-2 SEC) have been finding their groove as of late. They are led by Player of the Year candidate Tshiebwe in points (16.3) and rebounds (15.1). Freshman guard TyTy Washington is a potential lottery pick in this summer’s NBA draft, averaging 13.6 points and 4.4 assists per game.

Kansas (17-3, 6-1 Big 12) is rolling through conference play, having won five straight. Ochai Agbaji leads the Jayhawks in points with 21.3 per game and is a projected first-round pick, as well as one of the favorites for Player of the Year. Christian Braun is also playing well this season, scoring 15.3 per game.

Both teams came out running early - the game looked like a track meet, with both looking to beat the other down the floor. Kentucky had a balanced scoring attack early on, and jumped out to a 25-13 lead.

At the seven-minute mark in the first, Kentucky stretched the lead to 35-20, after a Kellan Grady transition triple. They were dominating the glass, shooting 15-24 from the field and had sucked the life right out of Allen Fieldhouse.

The Cats had a great plan, working to slow down Agbaji in the first half by running him off the line and crowding with doubles as much as possible. He had only 3 points at the break - Kentucky held a 51-31 lead. Brooks Jr. led all players with 12 points. Tshiebwe had 11 points and 5 rebounds.

Agbaji was held in check all night, shooting only 4 of 14 from the floor for 13 points. Braun provided 13 points, 5 rebounds and 3 assists. Kellan Grady added 12 points for the Wildcats.

ESPN’s Jay Bilas said on the broadcast, “This was total domination, in every facet, by Kentucky.” It was certainly a statement win.

This was Kentucky’s first road win over a top-five team since 2014, when they defeated the then-No. 4 Louisville Cardinals.

Kansas will visit No. 23 Iowa State on Tuesday.