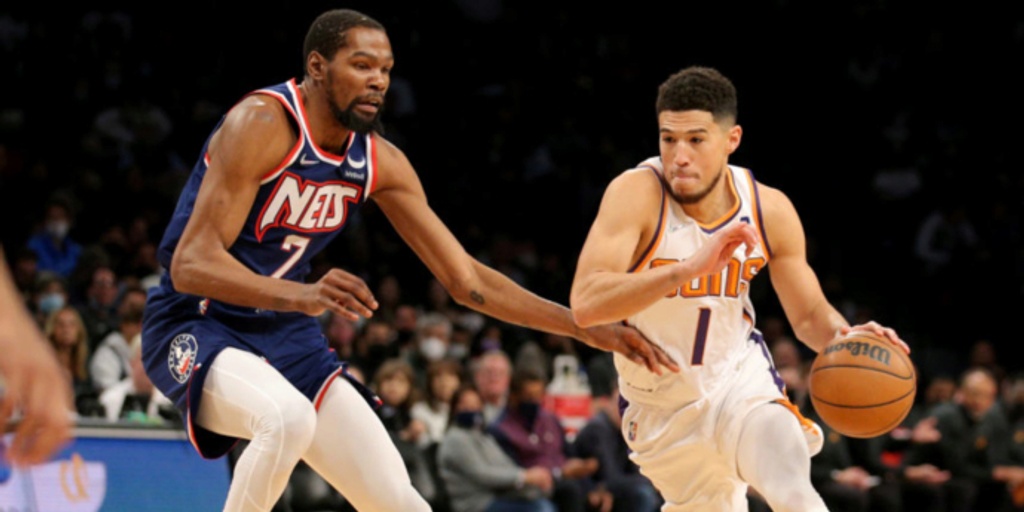 Now that the smoke has cleared following one of the most eventful NBA trade deadlines in league history, which teams are best positioned to make a championship run this season?

Not only were there several blockbuster trades prior to today's deadline, there were also a number of contenders who made moves that may have altered the NBA landscape.

The Brooklyn Nets entered Thursday as the favorites to win it all this season (at +400, or an implied 20% chance of hoisting the Larry O'Brien trophy). However, following today's blockbuster trade that sent James Harden to the Philadelphia 76ers for Ben Simmons, Seth Curry, Andre Drummond and two first-round picks, the Nets' odds dropped to +500 (or an implied 16.7% chance).

After being viewed as the championship favorite all season long, Brooklyn now has the same title odds as the Phoenix Suns (+500) and Golden State Warriors (+500).

At the moment, there is no clear-cut favorite to win this year's title, with oddsmakers giving the Nets, Suns and Warriors each an implied 16.7% chance of winning the championship.

“The Nets odds weren’t severely hurt, as they added some top talent in the deal," OddsChecker spokesman Kyle Newman said. "Ben Simmons brings elite defense and playmaking and Seth Curry is an elite three-point shooter. Adding the two of them mitigates the loss of Harden some."

The 76ers were the big winners today, as their odds jumped from +1600 (or an implied 5.9% chance of winning the title) to +550 (or an implied 15.4% chance). Oddsmakers essentially believe that the deal triples the 76ers' chances of winning it all, and Philadelphia now has the fourth-best championship odds.

"Meanwhile, the 76ers just traded somebody who wasn’t playing for them along with two role players to add one of the league’s best scorers. They couldn’t have imagined a better scenario, and oddsmakers are taking notice," Newman said.

While the Warriors had a quiet deadline, the Suns were also active, trading for Torrey Craig and Aaron Holiday this afternoon. Phoenix only had to part ways with Jalen Smith and a future second-round pick too. Even though the Suns weren't able to land Eric Gordon or Thaddeus Young (as they had hoped), these were still two impressive win-now moves.

The Nets are currently 29-25, which is the eighth-best record in the Eastern Conference (and they have lost nine-straight games). The Sixers are 32-22, which puts them in the East's fifth seed. The Suns (44-10) and Warriors (41-14) are the top two seeds in the Western Conference.