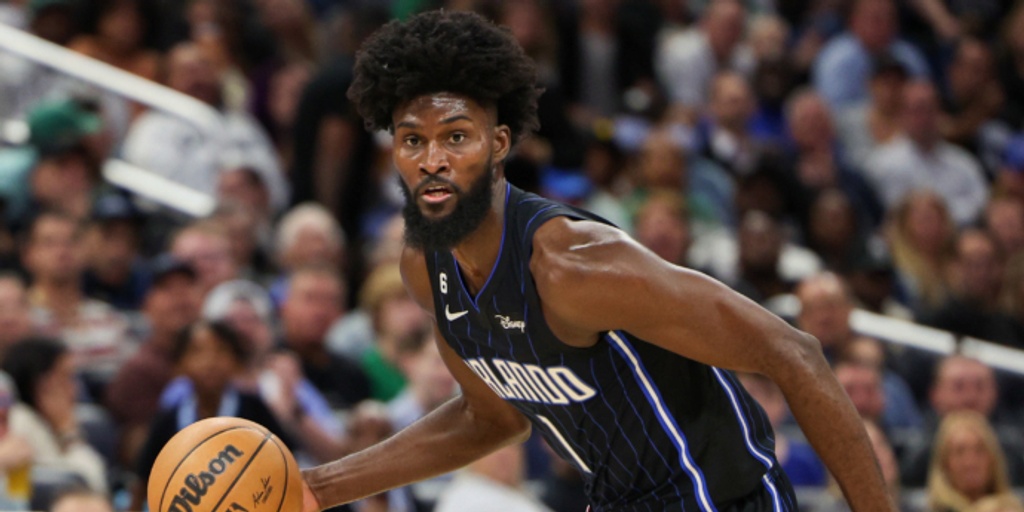 After being sidelined for nearly two-and-a-half years – 904 days to be exact – due to a torn ACL, Orlando Magic forward Jonathan Isaac made his return on Monday against the Boston Celtics.

Isaac was on a minutes restriction, but made the most of his playing time. From the moment he checked in, he made his presence felt by knocking down jumpers and guarding both Jayson Tatum and Jaylen Brown.

The former No. 6 overall pick provided a ton of energy and activity – even diving for a loose ball at one point – and he didn’t hesitate when given opportunities to shoot. The fans gave him a huge ovation when he first checked in, and they went nuts every time he made a play.

His best sequence came late in the third quarter, when he knocked down a three-pointer and then stole the ball from Brown to create a fastbreak dunk for Paolo Banchero.

The Magic are so back pic.twitter.com/le25Znnmy1

Isaac initially tore his left ACL on Aug. 2, 2020, when Orlando was competing in the NBA Bubble at Walt Disney World. Isaac suffered numerous setbacks – and even needed a separate surgery on his right hamstring at one point – causing him to miss the last two seasons entirely.

"It’s been such a long road," Isaac said after the win. "[I was] thinking about all that it has taken to get here – the tough days, the good days, the bad days, the ups-and-downs, and all of the people that were a part of getting me back. The training staff, we call them the purple people eaters, but our coaches that worked with me tirelessly – Nate Tibbetts and all of those guys. And then just my family, my church family, my faith that I have been fortunate enough to lean on this entire time. I wouldn’t be here [without] all of that. Much love to the Magic for sticking with me, and the Magic fans that were excited. Just trying to bottle all of that up in one moment, it was surreal.”

To put Isaac’s missed time in perspective, consider this: the last time he appeared in an NBA game, Anthony Edwards and LaMelo Ball had yet to be drafted. Also, the movie "Tenet" hadn't come out yet. The Magic looked very different back then too; the only players remaining on the roster from when Isaac suffered his injury are Markelle Fultz, Terrence Ross and Mo Bamba.

Now, the Magic are one of the youngest teams in the NBA and they’ve assembled a talented core that includes Banchero, Franz Wagner, Wendell Carter Jr., Bol Bol, Jalen Suggs, Cole Anthony and Fultz. Since Isaac is only 25 years old and still has plenty of untapped potential, the former No. 6 overall pick should fit right in with Orlando going forward.

“We’ve been waiting for J.I. to get back and it’s been a long process, but he had to take his time and listen to his body,” Banchero told Basketball News. “I’m happy for him that he’s finally able to come back and just receive the love that he deserves. These fans have been waiting to see him, so everybody is really excited. This is probably the healthiest we’ve been all year.”

Prior to his injury, Isaac was widely regarded as one of the best young defenders in the NBA, driving opposing teams crazy with his versatility, quickness, length and activity. During the 2019-20 season, Isaac averaged 11.9 points, 6.8 rebounds, 2.3 blocks and 1.6 steals on .470/.340/.779 shooting splits. If he can stay healthy, it’s not crazy to think that All-Defensive honors are in his future, and he could even grow into a Defensive-Player-of-the-Year candidate.

The Magic currently have the NBA's 22nd-ranked defense (allowing 112.2 points per 100 possessions), so they could certainly use a healthy Isaac on that end of the court.

Mosley was impressed with Isaac's effort on Monday night.

"I thought he was great," Mosley said. "I thought he did a great job playing with a level of poise. I think that was the importance of him getting the G League time. Obviously, there was a ton of emotions and rightfully so. I thought it was great the way he handled himself."