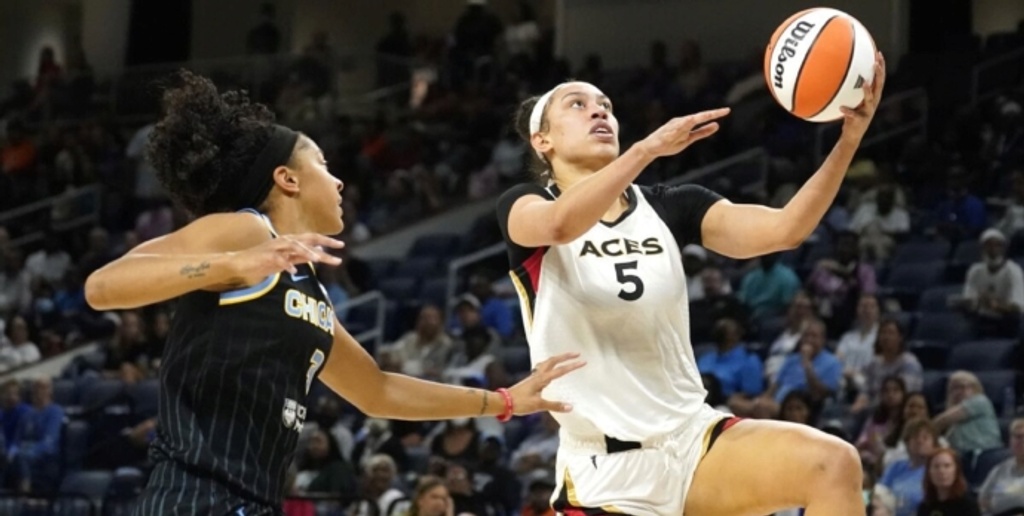 The reigning champion Las Vegas Aces have made their first move of the offseason.

On Saturday morning, the Aces announced the trade of All-Star forward Dearica Hamby to the Los Angeles Sparks. Along with Hamby, they'll be sending a 2024 first-round pick to the Sparks for the rights to Amanda Zahui B. and a 2024 second-round pick.

Las Vegas Aces General Manager Natalie Williams announced today that the team has acquired the rights to center Amanda Zahui B. and a 2024 second round pick from the @LASparks in exchange for the contract of Dearica Hamby and a 2024 first round pick.

Hamby has been a crucial part of the Aces' recent success, winning Sixth Woman of the Year twice (2019, 2020) and making a pair of All-Star teams (2021, 2022) within the past four seasons. Her ability to pley 3-through-5 — and more importantly, defend 3-through-5 — enhanced the Aces' lineup versatility.

Hamby often served as a connector for the Aces offensively, making heady short-roll plays, flowing into handoffs with Vegas' bevy of talented creators or simply keeping things moving with strong drive-and-kick sequences. Her ability to handle the ball allowed her to kick-start transition opportunities; they don't call Hamby "Big Guard" for nothing.

When available — Hamby is currently pregnant, though hopes to be ready by the start of the 2023 season — her versatility could be a huge boost to the Sparks.

In a worst-case scenario, Hamby can serve as a bit of frontcourt insurance. The Sparks recently traded away Olivia Nelson-Ododa as part of the package to bring in Jasmine Thomas. More critically, Nneka Ogwumike and her sister Chiney Ogwumike are both unrestricted free agents.

For the Aces, this gives them a bit more flexibility. Before today's trade, the Aces had the lowest amount of cap space in the W (roughly $138K) with two roster spots to fill. They'd essentially have two minimum contracts to work with.

With this deal, their cap space balloons to over $300K. If they're able to reach an agreement with Zahui B., it's likely her figure would come in lower than Hamby's ($169K). That would give the Aces the ability to be players among mid-tier free agents — or higher, if their targets are willing to take paycuts to join a ready-made contender.

Zahui B. garners intrigue as a big with center size (listed at 6-foot-5, 184) but stretch elements to her game. She's comfortable pulling from deep, particularly above the break. She's two seasons removed from averaging nearly five three-point attempts, and knocking those down at a respectable 34% clip.

You'd love for that to be higher, but her blend of volume and comfort relocating around the arc has garnered the attention of opposing bigs. For three-point shooters, their reputation — and the attention they draw — can surpass the efficiency you may see on the box score.

For an Aces team that often saw teams aggressively help off Hamby — and mostly ignore Kiah Stokes — when spaced on the perimeter, Zahui B.'s presence could further unlock possibilities for an already-elite offense.