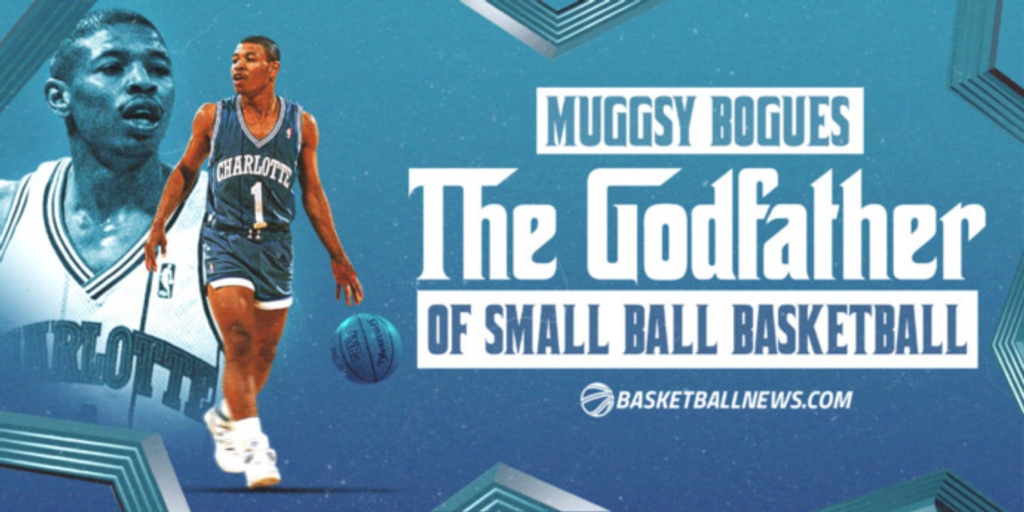 The Godfather of Small-Ball: Muggsy Bogues dishes out on new book

Tyrone Curtis "Muggsy" Bogues is a man of many things.

He was the drink stirrer of one of the greatest high school basketball teams ever, a victim of the Monstars' banditry and, most notably, the shortest player to ever don an NBA uniform.

His professional life resembles the six degrees of Kevin Bacon in how intertwined it is with so many iconic players and moments in league history. He was on the Hornets when the infamous Vlade-Divac-for-Kobe-Bryant transaction went down. He was in the gym the day Latrell Sprewell got physical with Coach P.J. Carlesimo. And he had a backstage pass to the rise of one of the most transcendent players in league history, Stephen Curry.

And now, he’s finally decided to chronicle his tale in his upcoming book, "Muggsy: My Life from a Kid in the Projects to the Godfather of Small Ball."

“I wrote [a book] early on in my life in 1994,  but this one has a lot more substance. [It’s] a lot more about the way I impacted some of the players I played with, as well as some of the current players that [are] playing today,” Bogues said.

But time has a way of muddling our ability to recall the past, and those unfamiliar with Bogues’ game may not realize that he was far more than a funhouse mirror phenomenon. He was a damn good professional basketball player for almost a decade and a half.

Many critics point to his existence as a referendum against the talent pool of the Jordan era, but Bogues’ skillset — a game predicated on pushing the pace, passing and hounding people on defense — actually makes him a solid fit for the way the game is played today.

When asked how he would fare in 2022, Bogues acknowledged the tendency of humans to overestimate their own individual abilities. “I think any NBA player feels like they can play in any era.”

However, even with that caveat, his conviction was unwavering, culminating his response with an emphatic, “Oh, absolutely!”

At his best, Bogues was the quarterback of one of the fastest offensive attacks of the early 1990s. Under his guidance, the Charlotte Hornets finished top-four in pace every season from 1991 to 1994, per Basketball Reference.

Bogues wasn’t just a speed demon zooming down the court with his head cut off. He was a steadying force capable of maintaining a well-oiled machine (the Hornets were fourth in offensive efficiency in 1996-97).

In terms of individual numbers, Bogues ranked top-nine in Cerebro Sports’ Floor General Skills metric, a metric that explores passing ability while also factoring in usage, athleticism and feel, and he did that every year from 1989 to 1995.

And for the creation stans out there, he ranked in the top-10 in Ben Taylor’s Box Creation metric (an estimate of open shots created for teammates per 100 possessions) every year during that time, except for 1991, when he finished 11th.

In Bogues' new book, Charles Oakley said this of his playmaking abilities: “[I]n the pick-and-roll, he could turn the corner, get into the paint and drive.”

In his heyday, Bogues leveraged his blink-and-you-might-miss-it speed to knife his way into the paint, force a collapse and ping-pong the ball over to his open teammates.

“Penetration always hurts the defense," Bogues said. "I always had the understanding of how to get guys to think one way when I want to go the opposite.”

That offensive aggressiveness was a big part of what made Bogues so valuable to his teams.

“One of the things coaches always emphasized is that [they] don’t want anyone getting in the heart of our defense. [So, as an offensive player], if you are able to do that, it puts your team at an advantage, and I was fortunate enough to be a penetrator my entire career."

An avid chess player nowadays, Bogues was playing a chess game of sorts on the basketball court long before he executed his first checkmate, treating his opponents like pieces on the board he could manipulate as he pleased:

“To me, it’s just that simple. If I drive hard this way, I’m going to make the defender have to collapse, and then that man right there is going to be open.”

His 4.75:1 Assist-to-Turnover ratio is sublime and gives him a higher mark in this category than many of the all-time great facilitators.

He managed this ratio without having the elevated sight lines of a Magic Johnson or Oscar Robertson. Instead, Bogues used his physical dimensions to create a different type of ocular advantage.

“They say Magic sees over top. [Well], I see around and through.”

Despite his stature, his defense may have been the perfect counter to today’s pace-and-space era because his main goal was to evaporate as much space as possible.

“One thing about guards, they like a cushion. They don’t like anyone crowding their space. I knew that drove folks crazy, so I became that pest on defense.”

He likens his game on that end of the floor to Patrick Beverley in their shared ability to jam opponents up and annoy them for 94 feet:

“It’s hard to see anyone out there of myself, but Patrick Beverley on defense is probably the closest. The way he irritates the players and gets all up in them, picking them up 94 feet and getting under their skin. He, defensively, is probably the only [comparison].”

But like all people, Bogues is far more than his former job title. He is a multifaceted individual rich with layers of wisdom and life experience.

One thing that will dawn on readers is the candidness in Bogues’ storytelling approach. He never once holds back as he navigates readers through the various losses he’s endured, the conflicts that persist in his most intimate relationships and his own most deep-seated insecurities.

Growing up in a low-income neighborhood in Baltimore with a father struggling to provide for his family as a stevedore in a dying industry, Bogues' early life runs parallel to many of the storylines discussed in the widely-popular Baltimore-based television show, "The Wire." Interestingly enough, his wife, Kim Bogues, later worked on the show and filled in as Kima’s body double.

Bogues uses his narrative as an opportunity to outline the race dynamics that exist within American professional sports, highlighting all of its glaring hypocrisies.

“How can they cheer me on the court and deride me off of it?” Bogues asks in his book.

“I always looked at this world as a human race as opposed to all the racial components that come with it. When you play sports, and you become teammates with people that don’t even look like you, they become your brothers/sisters. You have the same goal/task at hand, and you're fighting the same fight. How can you have that affection for them and then not [have that same affection] for someone who is on the same side, just not in sports? A title should not be what makes a person like/accept you in the way you want to be accepted.”

Even with his frustration, Bogues is optimistic about our potential as a society to correct the indifferences that have permeated from generation to generation. In the end, Bogues’ hope is that people will walk away from this novel with a thorough understanding of the power of resilience.

“[In its essence], this book is about someone that had a passion and just chased it each and every day.”

Through the name-calling, the physical limitations, the trades and the losses of loved ones, Bogues preserved and kept pushing forward.

“In fifty-seven years of life, I’ve had an opportunity to see quite a bit and experience quite a bit. [I] look at life in a light where we only get one, and we have to make the best out of it, each moment we have. Nothing is promised, nothing is given, and even if it was, we wouldn’t want it anyways. We love earning it, we love working towards it and we love making it better, not only for [ourselves], but for others.”

“[It’s about] having that resilience to where anything you feel you can accomplish, you should be able to go out there to accomplish. The only person holding you back is yourself. For me, being able to see it, and live it, and be a winner from it, I’m always going to be able to embrace that and share that with others.”

“[I just want to] make sure we all know how important life is.”

Want to hear more from Muggsy Bogues? Check out his appearance on The Rex Chapman Show from June 2021.