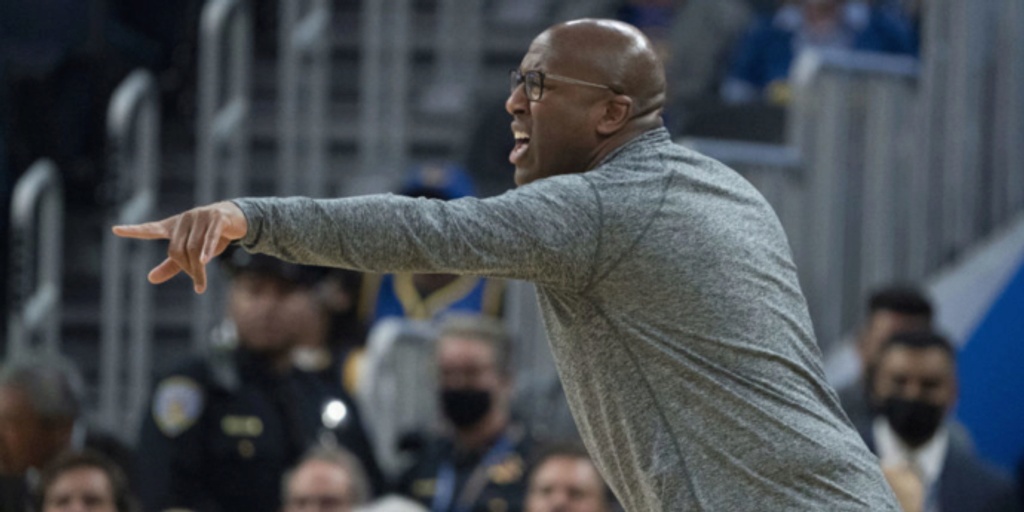 A crazy day: Mike Brown gets Kings' job, then fills in for Steve Kerr

The whirlwind of a day started that morning, when the Sacramento Kings announced that they were hiring Brown as their new head coach. Brown would continue coaching the Warriors throughout their postseason run, and then his four-year deal with the Kings would begin.

"Mike has consistently demonstrated his ability to lead winning teams throughout his long and successful coaching career," Kings general manager Monte McNair said in a press release. "He has worked with some of the best players in the NBA and is one of the league's premier defensive minds. I am excited to bring his extensive experience to Sacramento."

Previously, Brown coached the Cleveland Cavaliers and Los Angeles Lakers — even winning the NBA’s Coach of the Year award in 2009. However, after working as an assistant coach under Steve Kerr in recent years, this would be his first head-coaching gig since 2014.

While Brown was understandably excited about this new opportunity, he tried to focus on the task at hand: beating the Memphis Grizzlies in Game 4 of the Western Conference Semifinals. The Warriors were up 2-1 in the series and Monday's game was pivotal.

Little did Brown know, he would be thrust back into a head-coaching role sooner than expected.

“Steve called me on his way in at about 4:45, and said he just wasn't feeling well and there's a chance that he may not be able to coach tonight,” Brown recalled. “We've done this drill before, and so I said, ‘Okay.’ He came in, got tested; I get a call back at 5:15 saying that he's out. So that's how I found out [I’d be the head coach]."

That’s not an easy transition to make moments before a game, and Brown admits that he felt nervous after receiving that call.

“Obviously, there's butterflies because you're going into the game with a certain mindset and it's a big game,” Brown said. “Every game that we play at this point in the year, it's huge. So to have that kind of thrown at you, you've got to switch gears because I know what my responsibilities are going in as 'Mike Brown the assistant coach,' and it changes. Now, you have to manage everything and not necessarily manage the specific things that you were asked to do before gametime. So, I had to change hats quickly.”

The atmosphere surrounding this playoff game was unique too, as Draymond Green was playing with a heavy heart. Earlier that afternoon, Green learned that his college teammate Adreian Payne had been shot and killed the night before in Orlando. Green and Payne played together for two seasons at Michigan State, and Green was devastated. (Green announced a $100,000 fund in Payne's name and called on other Spartan alumni to contribute as well).

“I love Draymond and when he hurts, we all hurt,” Brown said. “It was an up-and-down, emotional day.”

Despite everything the Warriors were dealing with, they managed to beat the Grizzlies 101-98 to take a 3-1 lead in the series.

“I'm so proud of them," Brown said. "Our leader in Steve being out with COVID right before the game. Draymond, emotionally, he's our emotional heart and soul, and for him to get hit with something that impactful, not only was it tough for him, but we felt it. We felt it as a group. It was a tough night for us. But at this point in the year, you win ball games. It doesn't matter how you get there, but you win ball games. We found a way to win tonight and that's why I'm excited.

“When we went in the back, [Warriors assistant] Chris DeMarco says, ‘Punch 42. Dive 52.’ I'm like, ‘What are you talking about?’ He said, ‘We just kept handing the ball off to the fullback left and right, and at the end of the game, we kicked a field goal to win it. Hell of a football game.’ And that's what it was. But that's playoff basketball. Sometimes it's grimy. Sometimes it's gritty. They turned it into that in Game 2 in Memphis and we lost. They turned it into that again tonight, especially with Ja [Morant] out, but our guys found a way."

While Stephen Curry led the way with 32 points, 8 assists and 5 rebounds, Brown credited the leadership of Green and Andre Iguodala, while also shouting out the rest of Golden State’s coaching staff.

“Andre, I know he's not playing but just his voice, his presence, he's always saying the right thing. It uplifts all of us; it uplifted me,” Brown said. “I told him and Draymond, ‘I need you guys tonight. I need you guys. I'm going to lean on you guys.’ And those guys stayed steady the whole game; Andre on the bench, obviously, and Draymond out on the floor.

“To have veterans like Andre and Draymond who have been through the highs and lows of many playoffs series, when they are reassuring the guys of that, it gives everybody else confidence because we are playing guys right now who haven't been as far. Again, their presence, their voice, their calmness, their reassurance, all that stuff means a lot for our group, especially with Steve out… All of our guys – Kenny Atkinson, Bruce Fraser, Chris DeMarco, Jama [Mahlalela], [Dejan Milojevic], all of our coaches – were fantastic.”

After the game, Curry and Klay Thompson raved about Brown and how well he did on such short notice. They both pointed out that Brown had thrived in this position before back in 2017, when Kerr missed a stretch due to back pain and Brown led the team to an 11-0 record.

“It's been a wild day all the way around,” Curry said. “You just had to kind of figure it out on the fly. And I understand we've been through this before — guys that were here in 2016-17, with Coach [Kerr] and his back problems back in the day when he was out of the lineup and still had an influence. Mike B. stepped up, so we really didn't have a lot of time to react… He's coached in Finals before, coached some high-powered teams, some big-market teams – he's been through it all. He’s been with us for these last six years, and he's been interim coach for a little bit and made his presence felt, especially defensively leading us this year. He has a good presence about him, a great way about him.”

“Really happy for Mike B.,” Thompson added. “He's going to do great things for Sacramento. His head-coaching record for Warriors playoff games, I think, is undefeated. We did miss Steve a lot, just his voice, his presence. But we've been here before in 2017 when Mike took over and we rolled off a lot of wins. I reflected on that a lot. Just an up-and-down day as far as emotions… It was an emotional day. Prayers up to Adreian and his family and Draymond; I know they played together. Just a terrible loss of life and his legacy will live on. It was just a sad day.”

Brown will once again coach the Warriors in Game 5 tonight — this time with significantly more heads up. And, in typical Kerr fashion, Brown praised his players and downplayed his role in the Game 4 win.

“Any time you have Steph Curry, Klay Thompson, Jordan Poole and a guy who if he wasn't hurt would have been Defensive Player of the Year in Draymond Green on the floor, you know good things can happen,” Brown said. “If it's a one- or two-possession game down the stretch, whether you're down or up, you feel pretty confident. A lot of it has to do with the playoff experience that these guys have, but their talent and IQ, in my opinion, are second-to-none.”

Brown will never forget the day that the Kings hired him, and he'll likely go down as an interesting trivia answer too.

"I don't know in history if [anyone else has been] named the head coach of two teams in 24 hours," Curry said with a laugh. “He's continuing to set many trends!”