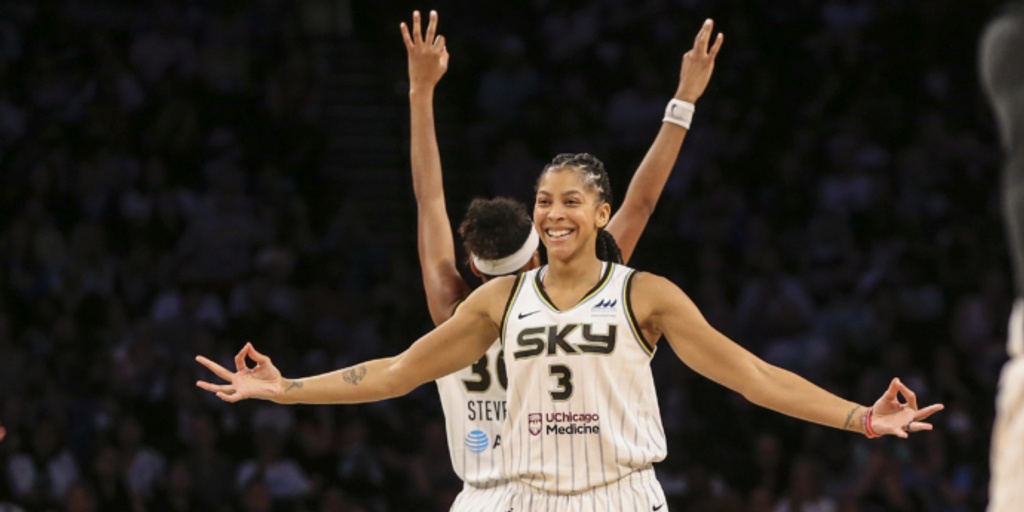 The Las Vegas Aces and Seattle Storm swept their opponents, and though the Chicago Sky and Connecticut Sun had to go on the road, they handled business with double-digit wins. That sets us up for a pair of thrilling second-round series including the top-four seeds.

Let's take a look at some of the key matchups and questions for each series.

KEY QUESTION: Who will win the paint battle?

It would be easy to go with the "power vs. finesse" angle for this frontcourt battle.

Chicago's trio of Candace Parker, Emma Meesseman and Azura Stevens (off the bench) do plenty of perimeter-based work. Parker and Meesseman often operate from outside as high post or handoff hubs, influencing the Sky's interior attack by picking out cutters. No frontcourt duo averaged more assists than Parker and Meesseman (8.3) this season.

Stevens was more of a spacer (36% from three on moderate volume) than hub; that spacing helped open the floor for others, and she provided her own value as the rare big with comfort attacking closeouts.

The Sun do more of the gruntwork inside. Behind the trio of Jonquel Jones, Alyssa Thomas, and Brionna Jones, the Sun led The W in post-up shot attempts per game (6.9, per InStat tracking) and offensive rebound rate (37.1%). No one embodies their physicality quite like Bri Jones. The list of players that can deal with her on the block or the glass is a short one.

There's versatility present, of course; Jonquel might be the best shooter on the roster, able to space, pick-and-pop, or run off screens. Thomas led all frontcourt players, and ranked 4th overall, in assists this season (6.1). She's comfortable bringing the ball up the floor and actually initiates a large chunk of the offense in the half-court.

This series may boil down to who can assert their style the most. While the Sun lack in pure shooting and improvisation, they could very well counter it by winning the possession battle. Due to their size and glass-work, a league-leading 37% of their shot attempts came at the rim this season.

The Sky, with their motion-based offensive attack and occasional mismatch hunting, ranked just behind the Sun in rim rate (35%) this season. Because of the skill-sets of their bigs, they could have success pulling the Sun's bigs out of the paint, thus opening the floor for their perimeter players to operate.

I have some serious questions about the Sun's backcourt.

At their best, Natisha Hiedeman and Courtney Williams can provide enough shot-making to complement their stars. Hiedeman is a sniper beyond the arc, having drained 40.5% of her threes over the past two seasons.

But there are drawbacks in this matchup. As lethal as Hiedeman is with her feet set, she hasn't gotten super busy off of movement. Of her 168 three-point attempts this season, only 42 of them (25%) came via isolation, ball screen, off-ball screen, or handoff, per InStat tracking. That has allowed Allie Quigley to take on that matchup during the regular season meetings.

For Williams, her inconsistency from deep allows teams to "gap" her off the ball. The Sky bordered on disrespect when she didn't have the ball, opting to ignore her completely to dig down on drives or double post-ups. Williams is going to make a shot on the possession below (a key for this series), but look at how threatened Chicago is by her.

There's also the matter of decision-making. Hiedeman and Williams can get buckets when they're on, but neither of them are natural playmakers. Part of the "why doesn't Jonquel get more touches" answer is their inability to find her in a timely manner. And as good as Thomas has been as a creator, she wouldn't have to do so as much if the guards could be trusted more to keep the offense flowing. Williams in particular has a penchant for taking tough, contested pull-up middies. She's good enough to make them, but the process can get murky sometimes.

I do wonder if the Sun take a page out of the New York Liberty's book from their first-round matchup with the Sky. New York found some success with ducking under picks, particularly against Vandersloot. When they were able to keep her out of the paint, Chicago's half-court offense sputtered some.

Beyond that, it'll be on the Sun's guards to stay connected off the ball. During the regular season series, I found they mostly did a good job of containing the Sky's initial half-court action. Trouble ensued once the possession went later in the clock, with impromptu jukes and backcuts leading to buckets.

If they're able to hold up, this series could swing.

KEY QUESTION: Who can flip the switch?

This is a star-studded matchup. If you haven't heard (or seen the 289347293482 graphics about it), there will be seven former No. 1 overall picks featured in this series: A'ja Wilson, Kelsey Plum, and Jackie Young for the Aces; Breanna Stewart, Jewell Loyd, Sue Bird, and Tina Charles for the Storm.

With the exception of maybe Bird at this stage, all of these players are comfortable going one-on-one and getting tough buckets. That may be necessary in this series considering where these teams are defensively.

The Aces were an aggressive pick-and-roll team at the beginning of the season, having their bigs play at the level (or higher) of ball screens. The Storm have dialed up the pressure on ball screens for years. As the season has gone on, and particularly during the regular season meetings, both teams have leaned a little more into switching.

Both teams generally do a good job of passing off their assignments when switching. The Storm, however, might be the gold standard in switching into a (perceived) mismatch, and quickly scram-switching their way out of it by toggling assignments off the ball. Look at how quickly Williams "scrams" Bird out of the Wilson matchup here:

That is beautiful work from the Storm. Bird goes from defending Chelsea, to switching onto Wilson, to immediately switching off Wilson to take Plum on the perimeter. They nail those kind of quick-hitting rotations.

This feels like more of an Aces question than a Storm one. Offensively, they're going to need to be purposeful and decisive when trying to attack in the half-court. They can't afford to have possessions like this:

The Storm served Bird up on a platter for Wilson early into the possession, and the Aces did nothing productive with it. What should've been a quick attack, or at least a dish and post-up opportunity, turned into  a drive from the corner gained little traction and ended with a late clock contested triple.

On the other end, they have to be able to 1) contain drives and 2) get their smaller players out of trouble when needed. The scram-switching from this unit has been inconsistent, to be kind.

Of course, this will depend on Williams' availability in this series. She suffered a concussion during the Storm's Game 2 victory over the Washington Mystics. At last check, she hasn't cleared protocols yet, leaving her unavailable for Game 1 at the very least.

Assuming she makes a return during the series, this might be the most important battle of the series. Plum has been electric all season, but has seen a dip in production — or at least a dip in ease — when faced with lengthy defenders.

Williams just happens to be one of the best defenders in the sport, listed at 5-foot-11 and equipped with endless, active arms. The Aces want to make quick work in the half-court. That means creating early advantages with ball screens or with movement, something Williams does a wonderful job of preventing.

If she's able to keep a handle on Plum, you can expect Aces possessions to end much later in the clock. On top of Plum's shooting, she also led the Aces (and ranked third in The W) with 58 made shots off drives, per InStat. Rim pressure has been a question mark for the Aces all season; only the Storm generated a lower percentage of their shots at the rim (23.9) than the Aces (24.6). If Plum can't get there, the Aces would have to rely almost entirely on tough shotmaking. They certainly have the talent to do it, but it's a diet they don't want to live on.