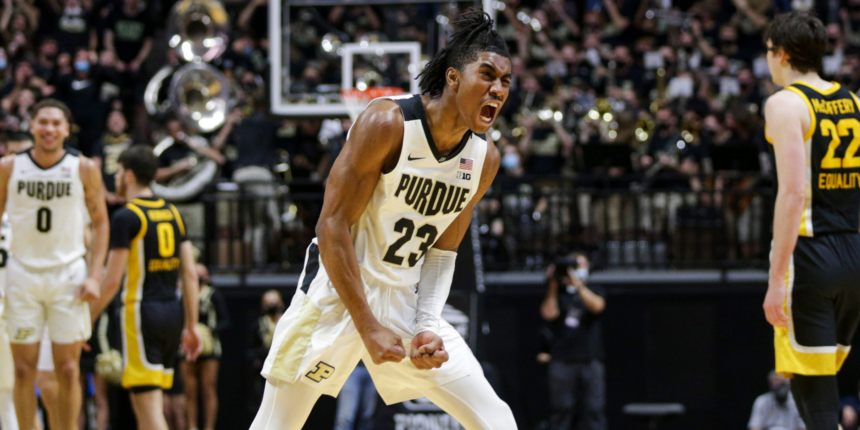 The college basketball calendar has turned over to a new year and a new stage of the season as conference play gets underway.

With stakes ramping up towards March Madness, top prospects are expected to accordingly step up their games. But already, we've seen star-level talents and breakout players make waves. Matt Babcock and the Basketball News Draft Team recently updated their 2022 NBA Draft Big Board, with Jabari Smith notably swiping the top spot. Babcock fielded some questions about the ranking, as well as players to watch over the next few months.

1. What inspired the move to place Jabari Smith atop your Big Board?

To be completely honest with you: Last year, I was tempted to put Evan Mobley at No. 1 pretty much all year, but I didn’t, and now I regret it. I am probably as high on Jabari Smith as I was on Evan Mobley at the same stage, and I didn’t want to make the same mistake twice.

Jabari Smith checks so many boxes and his upside is through the roof. I’ve gone on record saying that if everything clicks for him, he could become a prototypical stretch four. I mean, if I think a player can be prototypical at any position, how do I not put him at No. 1? So I’m high on Jabari Smith. However, I do think there are reasonable arguments that can be made for both Paolo Banchero and Chet Holmgren as the top prospects. For the time being, though, I’m rolling with Jabari Smith.

2. What is fueling the momentum carrying Bennedict Mathurin to No. 5?

I was intrigued by Mathurin last year, and I think he would have had a chance to be a first-round pick had he declared for the draft. I became somewhat concerned with his lack of ball skills early in this season and dropped him some, but he’s recently elevated his game. He has good size, is a big-time athlete, and is tough — he’s an alpha, for sure. He’s shooting the ball with range and seems to be expanding his offensive arsenal to where he can be considered a three-level scorer.

On top of all of that, I think he has a chance of being an effective defender. He’s a great example of a young prospect that is likely going to benefit significantly by betting on himself and returning to school for an extra year to continue developing. It’s sure looking like he’s about to cash out big.

3. Has Jaden Ivey separated himself as the top lead guard in the class? Who could challenge him?

Jaden Ivey has been terrific this season, and so has the Purdue team. I love watching them play! Regarding Ivey separating himself from other lead guards, I’d say that he has on some level or another. It also depends on how you interpret the classification “lead guard.” There’s no denying that he’s an incredibly dynamic player with the ball in his hands. However, I see his role ultimately being more along the lines of Dwyane Wade or Donovan Mitchell. They both generated a lot of offense on the ball, but were usually paired with another ball handler.

As for other prospects that could challenge Ivey, I’m still intrigued by Jaden Hardy’s raw talent. Many of us expected him to step into the G League Ignite and dominate, myself included. Well, he hasn’t done that. It seems as if he’s been going through some growing pains. I still think he has a chance to be selected high, though.

I’m also very high on Alabama’s J.D. Davison, Tennessee’s Kennedy Chandler, and Kentucky’s TyTy Washington. What I find interesting is that all five of those prospects that I listed are very different. That order could very well be determined by the style of play each team selecting prefers.

4. Which college freshmen have you seen start to find their footing recently?

The first name that comes to mind is A.J. Griffin from Duke. We projected him as a lottery pick going into the season. He had a slow start, but he was coming off of an injury, and he hadn’t played much the last couple of seasons. I think he just needed a little time to get his footing. However, he’s looked tremendous in the last couple of games. He has such an impressive physical profile for a wing, and his shot-making and creating abilities are off the charts. We currently have him at No. 12, but I could easily see us moving him up even higher if he keeps progressing.

5. Who has been the biggest surprise star in college so far?

Johnny Davis from Wisconsin has been the biggest surprise so far. He wasn’t even on our priority watch list going into the season. He’s a tough, strong scoring wing. He reminds me of former NBA player Arron Afflalo. He’s a good athlete and talented, but he doesn’t necessarily blow you away with his tools. He’s just a tough-nosed player who’s going to get it done. I’m scheduled to see him live in a few weeks when they play at Nebraska. I’m looking forward to that game.

6. What changes for you when college basketball transitions to conference play?

The way I typically put together my schedule, conference play gets a little easier for me. Strategically, I travel aggressively in November and December to get my bases covered. Then I can pick and choose my spots to travel to in between regional conference games. I’ve seen most of our high-priority prospects in person this year already, and I feel like I have a pretty good grip on the bulk of the draft at this point. The way I look at it, we’ve already done a lot of the necessary work.

Now, I can switch gears to get into more of a track mode, where I focus more on monitoring players rather than becoming familiar with them. I make more of an emphasis to gather intel in January and February too.

7. What is behind the rise of MarJon Beauchamp with G League Ignite?

I first met and saw MarJon work out a couple of years ago when he was training with my good friend Frank Matrisciano. At the time, MarJon was physically weak, and he had a reputation for having a selective motor and bad body language. He’s gotten so much stronger in two years, and his motor and attitude have gone from being questionable to now being two of his strengths. I’m not sure that I appreciate anything more than a player addressing his issues to accomplish their goals. Hats off to MarJon; he has done just that.

8. On the international front, has any particular prospect seriously raised their stock abroad?

No, not necessarily. Actually, regarding international prospects, it’s not looking like there will be nearly as many selected this year as we initially thought. For one, a lot of the top prospects in Europe aren’t playing that much, which makes it challenging to evaluate them. Also, one of our favorites, Roko Prkacin, is out for the season due to injury, unfortunately.

On the other hand, we are still very excited about the upside of Nikola Jovic, who’s playing in Serbia with Mega, and Ousmane Dieng, a French player currently playing for the New Zealand Breakers. Keep in mind that many of the top international prospects that we are high on are young and will have the option of withdrawing their names from the draft, or not even entering at all. Both seem to be more of a common practice by international players and agents in recent years.

Willy Hernangomez: 'My best version as a player is yet to come'
36 min