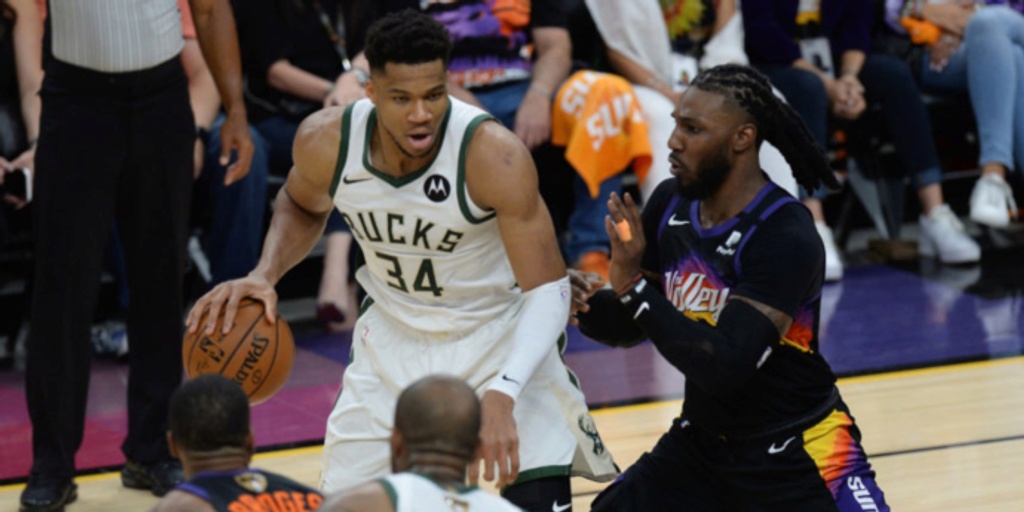 With the 2021 NBA Finals beginning on Tuesday night, BasketballNews.com will have you covered every step up the way with the top storylines, breakdowns, player quotes and more. Here are Spencer Davies' observations from the Milwaukee Bucks' perspective after their 118-105 loss in Game 1:

From the tip, the Bucks played as if they knew they had lost their first two Game 1s. Giannis Antetokounmpo really led the charge on a different gear, which is especially inspiring given he was listed as doubtful 24 hours before Game 1. He was getting early looks inside and making some solid decisions in passing out of the paint.

“The medical staff cleared me to play, and out there I had my balance. Thought my knee was stable. Did not feel pain. So I felt good,” Giannis said after Game 1. “At the end of the day, I'm out there. I felt good. I don't feel pain. I can run. I can jump. I can set screens. I can rebound the ball. I can do stuff.”

In his first action since Game 4 of the Eastern Conference Finals, Giannis finished the game with 20 points and 17 rebounds in 35 minutes. Bucks head coach Mike Budenholzer said the team mapped his playing time out.

“I think there were a lot of good things, considering five days and what he's been through these last five, six, seven days,” Budenholzer said. “I think 17 rebounds, 20 points, some great play-making, passing, defending the rim, he's just like everybody else. I'm sure we'll find some things where he could be better.

“I think it usually takes him playing -- he's a rhythm guy. So, I'm excited about how he'll improve from Game 1 to Game 2. We'll see how he feels. But I think play-wise, he always gets better when he plays.”

The Greek Freak provided highlights on both ends in the first half, ramming his shoulder through the body of Deandre Ayton on the left baseline for a monstrous slam and sprinting down the floor to reject Mikal Bridges on what looked like an easy layup. The swat was reminiscent of LeBron James’ block on Andre Iguodala in Game 7 of the 2016 Finals and even had the accompanying Mike Breen play-by-play call to go with it.

Aside from Giannis, the Bucks got some solid minutes from Brook Lopez on the offensive end, who was able to stretch the floor to open up lanes, but also working in the paint for good looks. However, Lopez didn’t see much time in the fourth quarter, as defensively, it was difficult for him to contain Chris Paul and Devin Booker -- two of the best pull-up shooters in basketball -- when he was left out on an island.

“I think I could have done a better job in trusting my teammates more behind me and try to make them put the ball on the floor more,” Lopez said. “But [Paul] hit tough shots. That's what he does. That's what he's done his whole career and he did that tonight. I think it's definitely finding that balance…”

“I think Brook played defense pretty well but that's what CP does,” Jrue Holiday said. “Those mid-range twos, those 15-footers, side-steps, side-step to the right, he makes those. Maybe just do something else. Make him put it in his left hand. Make him drive to the basket. Give him maybe a different look and do something different next time.”

While there were some decent moments from Holiday and Khris Middleton early, it seemed the two were content with going isolation mode instead of working within the usual offense the whole way. The team as a whole was missing bunnies, but Milwaukee’s backcourt did not appear to intend on consistently moving the ball to shift the Phoenix defense.

“I think I had a bad shooting night,” said Holiday, who went 4-for-14 from the field. “I had a lot of opportunities to make layups and shots and they weren't falling. Again, I think I do a little bit more than scoring, just getting people plays and threes and driving to the basket, but me personally, I didn't shoot well tonight.”

“It's always a balance for Jrue [finding guys], not just Giannis; he likes to set his teammates up,” Budenholzer said. “He likes to get everybody involved. So, I think it's partly on me. I've got to make sure he's getting in situations and spots where he can be aggressive. I think he'll be better going into the second game.”

Regardless of the lack of offensive execution, Middleton found his mark individually in the second half, erupting for 17 of his 29 points and doing all he could to keep Milwaukee in the game with a few impressive contested makes. It’s also worth noting that Middleton was getting bumped on his drive attempts and didn’t receive much respect from the officials.

“It's tough, you know, teams have been getting up in me lately,” said Middleton, who had zero trips to the line on 26 field goal attempts. “Just got to try to play through it. Can't try to wait for the officials to bail me out. Just try to be strong with it. If they call a foul, they call a foul. But lately, they haven't, so I've just have to play better, be stronger.”

The telling figure of the night was the Bucks’ 16 free-throw attempts as compared to the Suns’ 26. And while the discrepancy was wider in the first half, it was the total makes (25 for Phoenix, 9 for Milwaukee) that set the two teams apart.

“I think the most disappointing part is the free throws,” Middleton continued. “[They] shot way more free throws than us. We have to do a better job of attacking and driving the rim like they did.”

Phoenix’s hands were active from the get go, and whether off strips and rips, or hitting the glass defensively, the team got up and down the floor with numbers. That was much in part to Suns' force Deandre Ayton refusing to be denied a rebound after each stop. The Bucks did a better job of containing them in transition in the second half...but ultimately, it was too late.

Paul dazzled in the third quarter with 16 points, scoring with the three-ball, fadeaway mid-rangers and his handles to get into the paint. Between Booker and Paul getting bigs switched onto them after screens all night, it was a foregone conclusion. It didn’t matter who got stuck out on the perimeter -- the Suns benefited nearly every time. Diagonal drives were open for business, and Phoenix took the space and ran with it.

Budenholzer went to Giannis at center in the fourth quarter as a shot in the arm, and the Bucks cut it to single digits midway through the fourth with tighter defense. However, the energy of Cameron Johnson on both ends -- along with Booker and Paul’s closing prowess -- proved to be too much for Milwaukee.

Luckily for the Bucks, they know this position all too well. If Milwaukee has anything to hang its hat on, it’s resiliency.

“It's just all of [the previous series], not just the Toronto series,” Middleton said. “Last year in the bubble, this year in the playoffs against Brooklyn. We were down 3-2 and was able to force Game 7 and win a game on their home court. So I think we've been through a lot. We've been through it all. We know it's not going to be easy. We know it's going to be tough and there's times where we're going to be down in the series. But the series is not over yet if we're down. We still have to keep competing and just playing.”

Giannis doesn’t like looking backwards and likes to move forward. He does admit that the experience in difficult situations contributes to the Bucks’ mindset, though, and that is a good thing heading into Thursday.

"But try not to focus on the past as much because it's in the past. I learn from it. Hopefully from the series up 2-0, and when the team is up 2-0, we can close out the series and advance to the next round. But at the end of the day, you don't know what you're going to expect. You cannot predict the future. But in any situation we are in, we've got to find a way to win the game, win the game and find a solution to be better, play better and do it together."

Game 2 will take place on Thursday night. Tip off is scheduled for 9:00 p.m. ET.