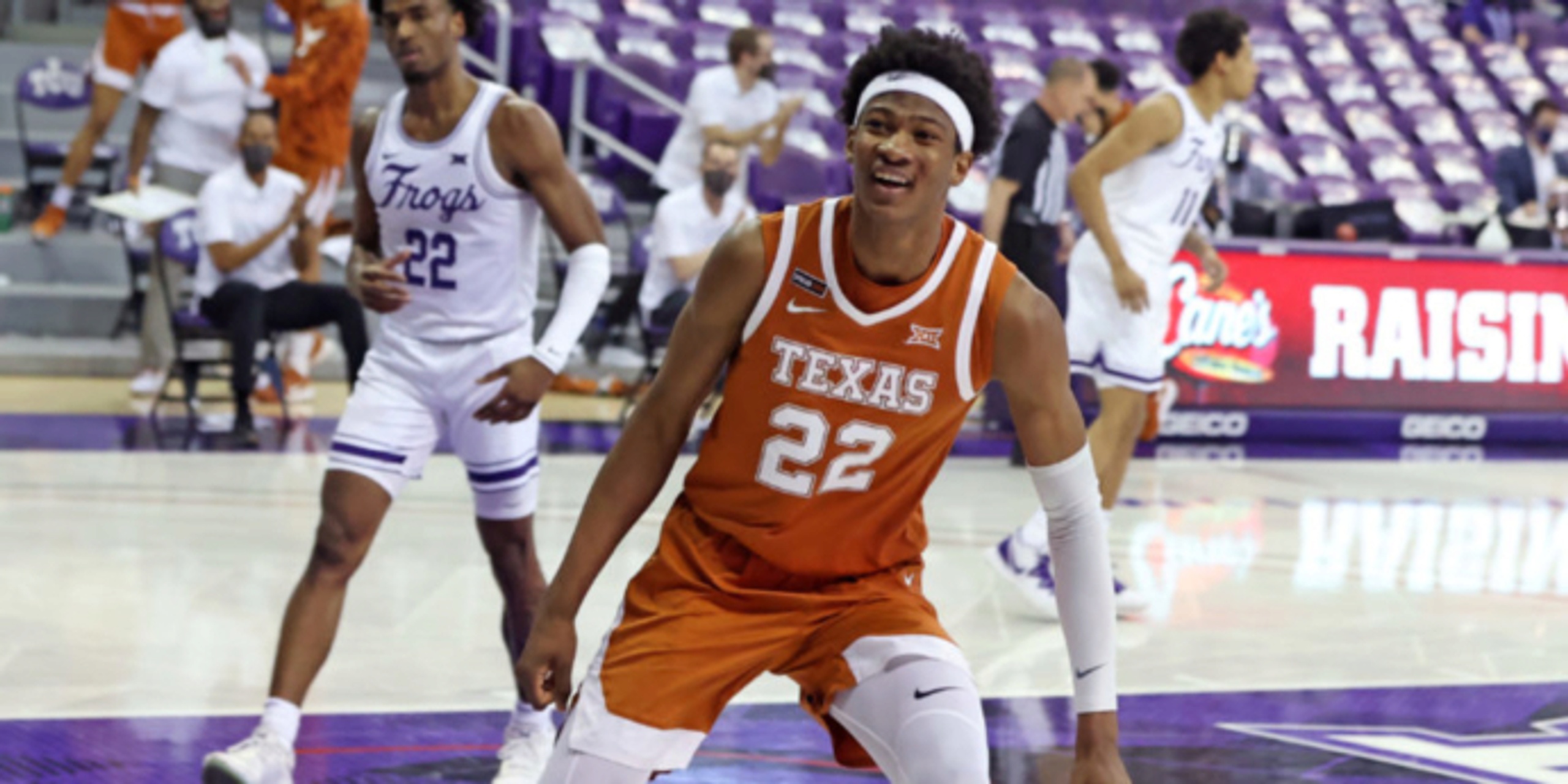 The 2021 NBA Draft is 2 days away, so BasketballNews.com is breaking down the best prospects in each conference. Today, we’ll look at Big 12 players to keep an eye on.

Throughout the college basketball season, Cade Cunningham’s name is the one that has consistently been spoken as the number one overall pick in this year's draft. While others may have entered the conversation, the overwhelming majority have maintained that he’s the one.

Cunningham is a 6-foot-8 guard/wing whose combination of offensive facilitating, scoring dynamism, versatility, high IQ, and clutch play have impressed scouts and fans alike. He’s been able to reach and hold the top projection. Cunningham was the engine of a high-caliber Montverde team that also had the likes of fellow projected 2021 draft picks Scottie Barnes, Moses Moody and Day’ron Sharpe, along with other current and future NBA players. Billed as an oversized playmaker coming out of high school, questions loomed regarding Cunningham’s ability to score from outside, as an inconsistent jump shot was considered a weakness. However, once he took his talents to Oklahoma State for his assumed one-and-done collegiate career, a new layer of his game was added.

Cunningham took a step forward as a scorer as he shot 40% from beyond the arc and converted on 1.1 PPP in isolation situations, according to InStat. He proved that he was able to influence gravity not only as a passer but also as a three-level scorer. That allowed his high-level passing to shine. While his assist numbers may not jump off the page, they aren’t indicative of the passing ability that he possesses when you watch the film. In the NBA, he’ll have more spacing and a higher talent level surrounding him, which will give him double-double and even triple-double potential on a nightly basis. Cunningham also has the ability to defend multiple positions and made some impressive winning plays on defense this past season. To add the cherry on top, Cunningham, by all accounts, is a true leader on the floor who wants the ball in pressure moments. The Pistons hosted Cunningham for a light workout last week in Detroit and reports out of Cunningham’s camp say that he won’t visit any other teams. Unless a wild turn of events occur, expect Cade Cunningham to be the first name announced by Adam Silver on Thursday night.

Cade Cunningham remains the No. 1 overall pick to the Detroit Pistons in our latest mock draft.

One of the highest upside prospects in this draft is Kai Jones of Texas. The 6-foot-11 sophomore came off the bench for the Longhorns but had plenty of flashes of athleticism and versatility over his two seasons. Jones projects as an energy big who’s rim-running ability creates easy points at the basket. His explosive leaping ability, 7-foot-1 wingspan and high energy combine to create a prospect with intriguing shot blocking ability as a dunk/lob threat on the offensive end of the floor. Jones had numerous highlights this season where he stifled the opponent with a block, quickly got out in transition and finished the play with an emphatic dunk.

Still, his versatility is what intrigues the most as he has shown an ability to make decisions from the perimeter, shoot with relative efficiency (38.2% on 1.3 three-point attempts per game) and put the ball on the floor. He can also obviously finish at the rim while locking down perimeter players and get big stops. He had some impressive moments against a few of the Big 12’s best guards like Cade Cunningham, Davion Mitchell and Jared Butler.

Jones is still a bit raw, as he picked up basketball as a 15-year-old in the Bahamas, and he will need to add size and strength to compete against other NBA big men. But the tools are there. If they can be tied together, they can form an elite and modern NBA big man.

Kai Jones is projected as the 11th pick to the Charlotte Hornets in our latest mock draft.

The Baylor Bears had a major disappointment last year when the season (and the world) was shut down because of COVID-19. Many presumed Baylor would make a March Madness run to the Final Four.

Davion Mitchell was already displaying his defensive prowess during the 2019-20 run, but his 2020-21 season is what brought him into the lottery conversation. A Pitbull of a guard, Mitchell’s defensive impact has immediate translatability. He possesses good lateral quickness, a plus-wingspan and a knack for making plays on the ball and creating turnovers. Although he’s undersized by NBA standards, he projects to cause problems for opposing backcourts because of the pride he takes on the defensive end.

Where Mitchell’s upside comes in is the leap he took as an offensive player this past season. His off-the-dribble creation was impressive, as he showed off a tighter handle with a quick first-step to blow by defenders. He also has the athleticism and finesse to finish around the rim. His shooting numbers up to this season were not very strong, but this year, he improved; he shot 51% from the field, including 44.7% from three-point territory. Some scouts find fault with his low free throw shooting numbers and the fact that he’s older prospect, but he’s shown he has value as an NBA player and that he can help a contending team right away on both ends of the floor.

Davion Mitchell is projected as the 13th pick to the Indiana Pacers in our latest mock draft.

The other half of the Baylor Bears national championship backcourt is a prospect who’s been on the NBA draft radar since he tested the waters last season.

Jared Butler is a smooth and shifty combo guard with a game that translates well to today’s league. The draw with Butler is that he can excel as an on-the-ball pick-and-roll creator or off-the-ball spot-up three-point shooter. Butler is a wiz in the pick-and-roll. as he’s shown the ability to make any read out of that action and make defenders pay with his passing or scoring acumen. Butler has developed into one of the best three-point shooters in college basketball, as he shot above 41.6% from beyond the arc along. His backcourt mate, Davion Mitchell, shot 44.7%, which made them a devastating combination. Butler also uses a crafty handle to get to his spots and self-create both points and passing lanes for his teammates.

Butler's game is very balanced as he also brings it on the defensive end. Along with Mitchell, he gave opposing backcourts many problems. Although Butler is not an overwhelming athlete, his two steals per game are indicative of the activity and engagement he has on the defensive end. He has very active hands and the quickness necessary to play passing lanes. Butler had some health concerns as he was screened for this year's draft, but was recently cleared to play. That should allow him to complete his goal of being drafted. He’s got the ability to step on the floor next season and make an immediate impact for a team looking for more depth.

Jared Butler is projected as the 18th pick to the OKC Thunder in our latest mock draft.

With a similar profile to Davion Mitchell, Miles “Deuce” McBride is another one of the Big 12’s lockdown defenders. Another undersized guard who plays bigger than what the measurements suggest, McBride, standing at 6-foot-1, uses his eye-popping 6-foot-9 wingspan to contest shots, get deflections and make opponents uncomfortable over the course of a game. This season, McBride had an impressive defensive sequence against Cade Cunningham on back-to-back possessions at the end of the game’s first half — McBride got a stop and finished at the other end.

A player who gives up a 5-6 inch height difference not shying away from that moment and instead making two high-IQ defensive plays against the projected No. 1 overall pick would intrigue any NBA team.

As a full-time starter in his sophomore year, Deuce showed major improvements in his offensive game; he shot a strong 41.4% from three and used various dribble combinations to showcase a smooth mid-range pull-up game. However, McBride’s reliance on his midrange game did get him in trouble at times, negatively impacting his efficiency (he shot 43% from the field), but he currently projects as more of an off-ball player in the NBA, so it may be immaterial. He does also have some playmaking chops, which is reflected in his positive assist-to-turnover ratio. He could take on some secondary ball-handling duties early on in his career. McBride’s two-way potential has caused his stock to rise; he’s now in the conversation as a first-round pick, and for good reason. It’s easy to see his hard-nosed play as an impactful addition to a playoff team.

Miles McBride is projected as the 29th pick to the reigning Western Conference Champion Phoenix Suns in our latest mock draft.

Greg Brown is another prospect who came out of high school highly ranked, and his arrival at Texas was closely watched. He joined a Texas front court that had the previously mentioned Kai Jones, and the next prospect, Jericho Sims. Together, the three combined to form one of the bounciest front courts in all of college basketball. Brown has tantalizing athleticism that easily projects well to the NBA. It’s easy to expect him to thrive in transition, throw down some highlight dunks and create opportunities through his ability to fly around the court. While his ball skills are still developing, Brown has flashed his upside as an off-the-dribble scorer. He attacks close outs and utilizes his length to put the ball on the floor and finish at the rim. Brown also shot 33% from long range this season, showing that he can be a shooting threat in the future.

Brown’s measurements of 6-foot-8 (with a 7-foot wingspan) and elite athleticism suggest that he’ll be able to guard both forward positions, as well as some centers. That’s especially true if his body continues to get stronger.

In his lone season at Texas, Brown showed nice help-side rim protection and he moves fluidly enough to stay with guards on the perimeter. Maintaining his motor on defense will raise Brown’s ceiling and increase his odds to get on the floor early, as well.

Greg Brown is projected as the 36th pick to the OKC Thunder in our latest mock draft.

Jericho Sims, the third of the three athletic freaks from Texas, is the oldest of the three, but the senior helped his stock tremendously during the pre-draft process.

Sims is a strong, 6-foot-10, 245-pound center with the second-highest max. vertical leap in this year's combine — 44.5 inches. Those measurements along with a 7-foot-3 wingspan suggest Sims will translate well as a rim-running big man that will block shots and attempt to dunk everything. He was also at the top of college basketball in scoring as a rim-roller, finishing with an impressive 1.6 PPP in those situations, per InStat.

With additional offensive spacing in the NBA, Sims should continue to succeed in these areas of the game, but will need to improve as a passer out of the post. Additionally, Sims was Texas’ anchor in the middle and was a consistently impactful defensive player due to his shot-blocking ability and high motor.

It’s not difficult to see what Sims' role will be in the NBA and his four years of Big 12 experience has prepared him well for his opportunity at the next level. The pre-draft process treated Sims very well and it was capped off by the memorable moment of his hitting his head on the rim during the Klutch Sports Pro Day event.

Jericho Sims is projected as the 56th pick to the Charlotte Hornets in our latest mock draft.