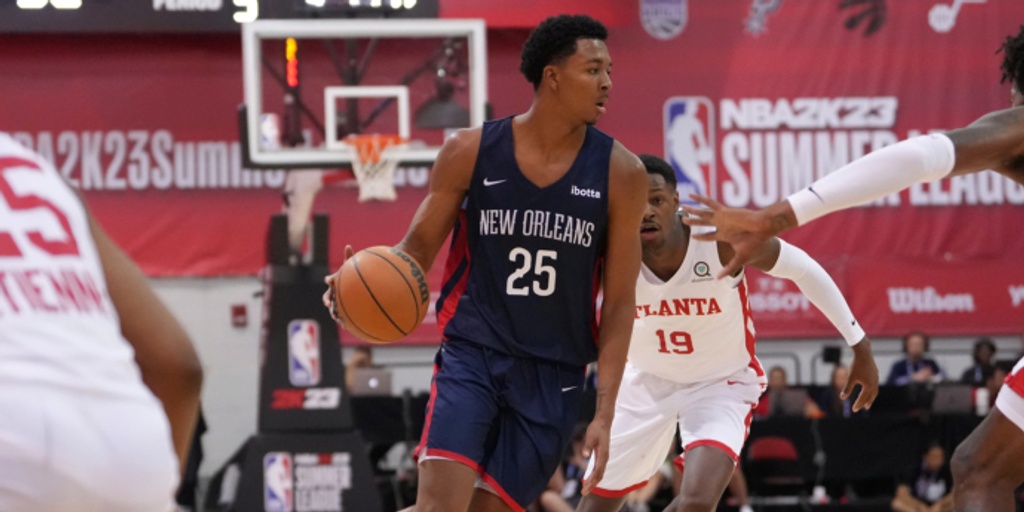 NBA Summer League is a showcase for some of the top young talent in basketball. It also gives those on the fringes of the league a chance to break out, and reveal inspirational journeys of perseverance in the process.

Boston Celtics swingman Matt Ryan canned a game-winner on Monday to cap a performance I'll highlight in this roundup. But perhaps the best part came in his postgame interview:

🎥: @ASherrodblakely asked Matt Ryan about how it feels to see his hard work starting to pay off.

He got choked up a bit while reflecting on the fact that a year ago he was driving for Door Dash and know he’s on a Celtics roster pic.twitter.com/GBRk9ya2rQ

For Ryan and dozens of professional hopefuls, Summer League can help alter the course of their careers and lives. Performances like these are worth saluting.

Here's who stood out from what I saw on Monday:

Murphy put on a full scoring display to open the afternoon. The second-year forward impressed me particularly with how he reached the rim off the dribble, changing speeds and using ball-screens to get downhill. He's a lot bigger and stronger than I've given him credit for; he finished hard through contact multiple times.

Of course, Murphy also knocked down a few long three-pointers, which has been his calling card since entering the league. He's been one of the most impressive scorers at Summer League to date, and hopefully it helps Murphy carve his niche in a deep Pelicans rotation.

If you want to call Eason the rookie MVP of the summer, I'd hear you out. The No. 17 overall pick seems to get better every game, and against the San Antonio Spurs, Eason unleashed his most prolific two-way performance.

His defense remains top-notch for a young player. Eason punctuated his effort with an awesome defensive rotation and block in the third quarter. Then on offense, he was scoring buckets as a rolling lob threat, an off-dribble driver and a corner shooter. I've reached the stage with Eason where I'm constantly reminding myself not to overreact about his talent.

Ryan was the hero in Boston's 111-109 win over Milwaukee thanks to his buzzer-beating three-pointer that included a twisted ankle in the process. But he caught fire throughout the contest. Ryan is excellent at relocating, and specifically earned some open looks when he capitalized on the chaos of an offensive rebound or loose ball.

Ryan played a grand total of five minutes with Boston last season after coming from the Grant Rapids Gold. With so many open roster spots, the Celtics could easily bring him back or sign him to a two-way contract.

WHAT IS THIS SANDRO MAMUKELASHVILI pic.twitter.com/BqPLOUyS1C

Though the Bucks lost their matchup against Boston, they had two outstanding individual performances. The first came from Mamukelashvili, the No. 54 pick in the 2021 NBA Draft. Mamukelashvili only had a pair of assists, but I thought they were two signifcant reads: a corner dart to an open MarJon Beauchamp three-pointer, and a dump-off from a drive to AJ Green. They complemented a versatile scoring performance, and he went toe-to-toe with Boston's Mfiondu Kabengele in a great battle that might have ended with the above posterization.

I liked some of Mamukelashvili's defensive moments too. He stuck to Juhann Begarin, an athletic driving wing, and picked up 2 blocks. It was a pretty great all-around effort for a player who could give Milwaukee some quality frontcourt depth.

Keeping Up With The Canadians 🇨🇦

Wigginton was throwing dimes all over the court. His 6 turnovers don't do Wigginton justice, as 2 of those were great passes that Wigginton's teammates simply mishandled. Wigginton assisted Mamukelashvili on three of his makes and also pushed the Bucks forward on fast breaks.

As a scorer, the second-year guard used ball-screens to find a lane or force a switch, which he punished twice with pull-up twos. Defenders sometimes went under screens, and Wigginton responded by drilling some high-arcing threes. He balanced creativity with poise as a lead guard.

As the above Tweet implies, we will be lucky to see the No. 2 pick swatting shots for a long, long time. Holmgren's incredible instincts and timing aren't any new revelation, but that doesn't mean we can't appreciate them over and over again.

Orlando did not defend Holmgren as a roller particularly well in this one, and he found some easy finishes as a result. He also hit the defense with a sweet step-back three and positions himself well for dump-offs from passers like Josh Giddey. The only area I'd nitpick is that he sometimes tried to do too much as a ball-handler and coughed up some turnovers. But why not try to get creative in this setting?

It's been a really rough week for Cooper as an offensive player. He's made 1 of his 14 field goal attempts through two games, and there isn't much to be optimistic about with his scoring flashes. Cooper really struggled to create easy looks at the rim. There were times where he'd even beat his defender on a drive and have them pinned on his hip, but he lacked the vertical explosion and strength to turn the advantages into quality chances. His perimeter shot looked inconsistent and timid. Hopefully, Cooper can turn things around, because we've seen so much more from him in the past year.

The Jazz eked out a win over the Dallas Mavericks despite some ghastly individual shooting nights. Bolmaro was determined to attack the Mavs off the dribble. The aggression was great, but it often came with a low-quality shot because he could not beat a defender, or he would drive into a crowd. I do want to credit Dallas because the team collectively played great defense against Bolmaro. The former Minnesota T-Wolves swingman also missed some must-have layups that I'm not concerned about in the future.

This is another dud performance that I wouldn't be concerned about long-term. Houstan spaced the floor extremely well, was active as a cutter and even displayed some confidence attacking closeouts. He just missed shots that he should make. Now, if you're a skeptic of Houstan as a shooter based on his time at Michigan, then maybe this outing means more to you. I'm a firm believer in Houstan being one of the more talented pure movement threats in this draft class, so an off night isn't a harbinger for me.

In a similar vein, Mann has proven from his flashes in the regular season that he's going to be an NBA-caliber scorer. Though Mann's Monday effort won't mean much in the long run, I felt he made some odd decisions on when to attack vs. settle/pass.

Sometimes ,Mann would try and make too much happen off the bounce against a stout Magic defense. On one other play, he had what appeared to be an easy rim attack, but hesitated and shot a three that ended up letting a defender back in the picture to contest. These are probably microscopic miscues, but I definitely want to monitor how Mann works alongside primary playmakers in Giddey and Jalen Williams.