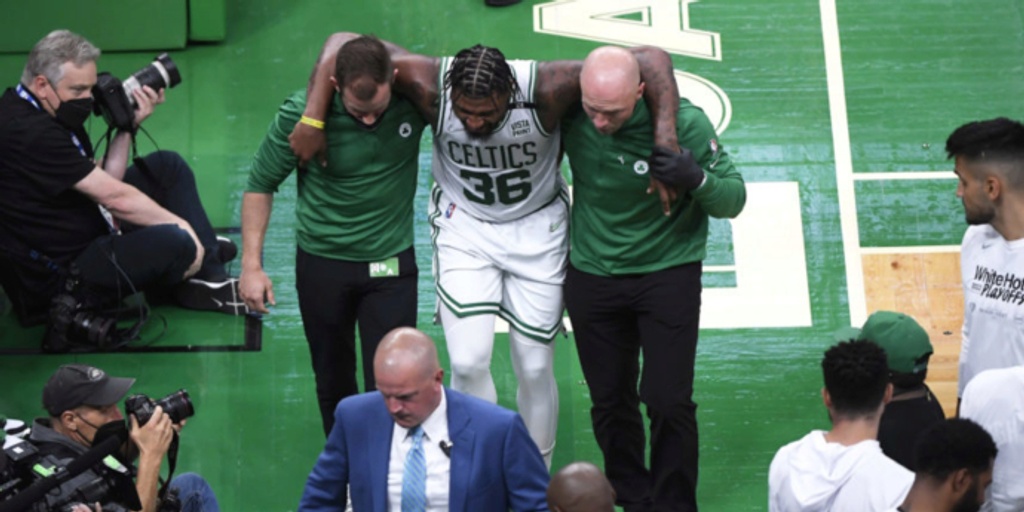 BOSTON (AP) — The Heat were embarrassed in Game 2, surrendering home-court advantage in their blowout loss to the Celtics in their Eastern Conference finals matchup.

Miami returned the favor in Game 3, building a 26-point first-half lead en route to hanging on for a 109-103 victory despite star Jimmy Butler sitting out the second half with swelling in his right knee. Tyler Herro also didn’t play the final eight minutes of the fourth quarter because of a groin injury.

With Boston’s Jayson Tatum (stinger) and Marcus Smart (sprained ankle) also suffering injuries late, the Celtics went from a chance to take control of the series to now trying to avoid losing back-to-back games for the first time in two months.

In addition to Tatum and Smart, center Robert Williams III sat out Game 3 with swelling in his surgically repaired left knee.

“Marcus has some swelling in his ankle. Took a pretty bad sprain. Finished the game, but he’s gonna feel it a little more today,” Udoka said.

“Getting worked on and getting treatment. See how he feels tomorrow. Jayson is fine. It’s a stinger that went away pretty quickly. And the Rob has improved. Feels better than he did yesterday. … It’s day to day. We’ll test it out tomorrow and see how he feels.”

Tatum (nerve impingement) is probable for Game 4, with Smart and Williams both listed as questionable. (Editor's Note: Smart has been ruled out for Game 4.)

Miami beating back a late-game charge by Boston to preserve a victory and take a 2-1 series lead is an encouraging sign for a Heat team that was 15-10 without Butler during the regular season. The Heat also wrapped up their first-round series against Atlanta without both Butler and Kyle Lowry.

Lowry played for the first time in this series Saturday, finishing with 11 points, six assists and four steals in 29 minutes. He had missed eight of the previous 10 games with a right hamstring injury.

He said it felt good to be back, but acknowledged it was tough to see both Butler and Herro added to their injury list — potentially again leaving Miami at less than full strength.

“Just having an opportunity to be out there with my guys is always fun,” Lowry said. “Injuries are a part of the game. That’s the part that sucks about the game, the injuries, and this is tough. Jimmy is a warrior. Tyler is a warrior. But we have to continue to stay focused on what we did as a group ... and hopefully those guys will be back and ready to go next game.”

Whoever Miami ultimately has available on Monday, Udoka said the onus will be on the Celtics to limit their unforced errors.

Boston turned the ball over a 2022 playoff-high 24 times in Game 3, leading to 33 Miami points. The Heat also had 22 more shots that the Celtics.

“Obviously those things stand out and a lot were us playing to the crowd, trying to do too much and not making the simple pass,” Udoka said. “When you look at those areas, we’ve had some good carryover at times, but at times taken a step back.

Tatum said avoiding what seems to be Miami’s magic number of 39 will also be paramount. Miami had a 39-point third quarter to take control in Game 1 and outscored the Celtics 39-18 in the first quarter of Game 3.

“There’s no excuse. We can’t spot them 39 points in the first quarter. Obviously we were just trying to overcome that the rest of the game,” Tatum said. “So we’ve obviously got to be better starting the game for sure.”