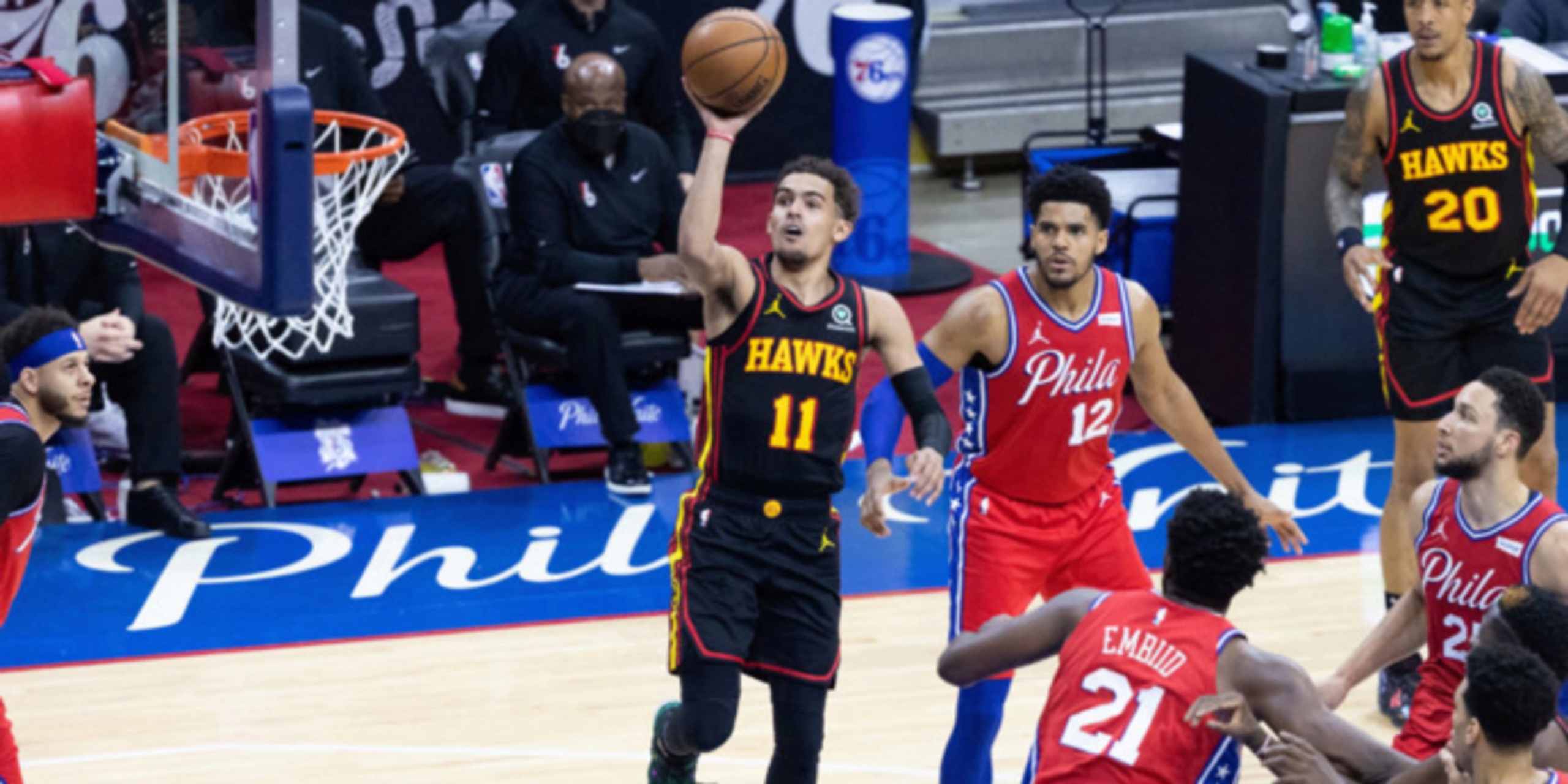 Trae Young has Atlanta floating through the postseason.

Young’s soft release on his high arcing shot over taller defenders creates easy buckets. Sometimes the shots are confused for lobs and snatched by his teammates for easy jams (Clint Capela got credit in Game 1 for an accidental alley-oop).

His floater is automatic.

Take that away, no worries. Young is almost as skilled as knocking down 3s from just over the line — the half-court line.

“It’s really just figuring out what type of defense they’re in and attack it,” Young said.

Young took a bow in New York, then took his breakout postseason off-Broadway to Philadelphia where he helped the Hawks pull off a Game 1 stunner and grab control of the Eastern Conference semifinal.

He’s like a slogan from those old Veg-O-Matic commercials: He floats! He lobs! And he julienned the Sixers into their worst half of the season.

What will Young do next?

“This is his stage now,” Hawks forward Solomon Hill said Monday. “He has the opportunity to play the best basketball of his career at the right moment.”

Game 2 is Tuesday in Philadelphia.

Young scored 25 of his 35 points in the first half of a 128-124 win on Sunday in a game where the Hawks led by as much as 26 points. Young’s dominance at the basket may have fallen off a bit in the second half — as the Hawks saw their lead sliced to two — but not his court awareness. With the Sixers on a run, Young let an inbounds pass bounce and roll on the court for nearly 20 seconds, methodically devouring critical time needed in Philadelphia’s comeback attempt.

Young joined Kareem Abdul-Jabbar of the 1970 Milwaukee Bucks as the only players in NBA history to score 30 points in each of their first four career playoff road games.

Here’s the hook for the rest of the series: If Young can maintain his pace — creating his own open looks and setting up teammates for their own — then the Hawks just might be East contenders. Young downplayed his own milestones in the Game 1 win when he became the first player in Hawks history to score at least 35 points and have 10 assists in a playoff game.

“None of these guys care about it in this room. All we care about is wins,” he said. “That’s what we’ve been doing and taking care of business. We just have to have that same mentality going forward. If we do that, we’ll be OK.”

— NEED TO KNOW: 76ers center Joel Embiid took at least one hard hit to the court when he lunged to commit a foul late in the game and acknowledged “playing on a torn meniscus is not easy.” Coach Doc Rivers said he checked in with Embiid about five times during the game to see if the big man was still feeling good enough to play through the cartilage tear in his right knee. Rivers often says all minutes are not played evenly, because superstars are asked to do more on both ends of the court, and Embiid played a hard 38 minutes.

“I think we always have to worry,” Rivers said Monday. “I don't think we're out of the woods. I think after each game, he's going to be evaluated for a while. I don't know how long that lasts. It may be three, four, five games.”

Embiid said there’s not much he can do except keep the knee iced, keep it elevated and manage the pain and swelling. The NBA MVP candidate insisted if he’s playing, he’s not on the court worrying about his knee.

“If you look at the history, every time I’ve had an injury, it always feels like I never miss a beat,” he said. “I go out there and I’m not thinking about what happened or what may be going on. It may be bothering me, but I’m just not thinking about it. I just want to focus on giving my all, just playing hard every single possession.”

— KEEP AN EYE ON: The Sixers bench. Rivers stuck with his all-second team unit of Tyrese Maxey, Matisse Thybulle, George Hill, Furkan Korkmaz and Dwight Howard in the first half even as the game got out of hand. The lineup was scoreless with five turnovers and was outscored 10-0 over a brutal 2:40 stretch that put the Sixers deeper in the hole. Hill and Howard, Embiid’s backup, both went scoreless.

“It didn’t work, but neither did the first group early,” Rivers said.

— INJURY WATCH: Hawks forward De’Andre Hunter sat out Game 1 with a sore right knee. He did not practice Monday and will be a game-time decision for Game 2.

— PRESSURE IS ON: 76ers guard Ben Simmons. He was an NBA defensive player of the year candidate for a reason, so it was a bit puzzling he didn’t get an earlier call to guard Young. Danny Green instead had the assignment and could not stop Young in the first half.

Green said Monday it's not “an individual effort” to stop Young.

Simmons had four steals in Game 1 and said he was ready to get the assignment on Young for Game 2. Much like he has all season, Simmons again struggled from the free-throw line, going 3 for 10. Simmons believes he could use 6-foot-10 frame against the 6-1 Young to his advantage.

“I’m looking to come in there and see if I can be a little more physical next game and see if the refs are going to let us play a little bit,” Simmons said.