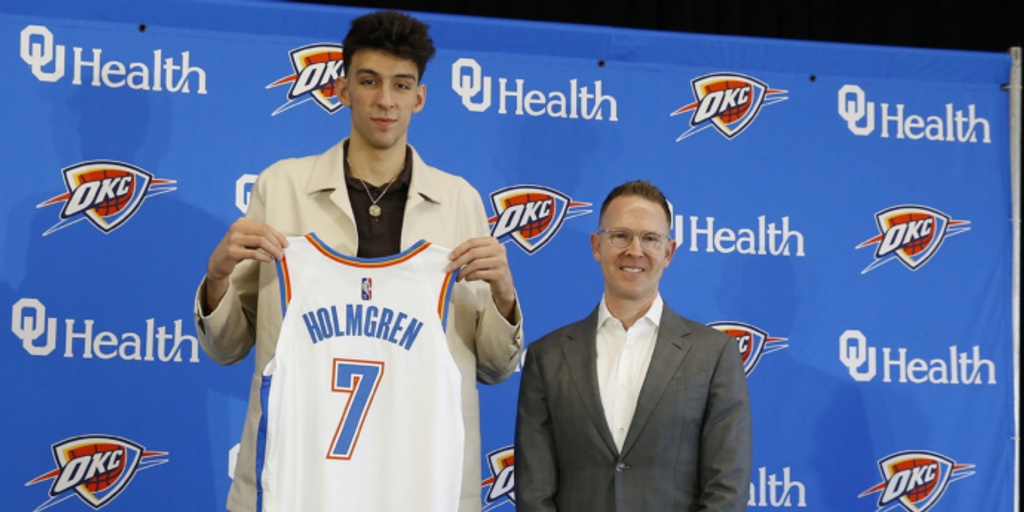 Back when the Thunder were still the Seattle SuperSonics, Presti made Kevin Durant the No. 2 overall pick in 2007 and Russell Westbrook No. 4 overall in 2008. The team moved to Oklahoma City for the 2008-09 season before Presti selected James Harden third overall in 2009. The trio took the Thunder to the NBA Finals in 2012, and all three were on the NBA's 75th Anniversary team listing the 75 greatest players in league history.

Presti picked Gonzaga's Chet Holmgren No. 2 overall Thursday. Holmgren knows all about the previous high picks, but he isn’t interested in comparisons.

“It’s hard to miss those guys and what they’ve done if you watch a lot of basketball, and I watch a lot of basketball,” Holmgren said Saturday during his introductory media session. “They’ve done some special things here as well as other places, wherever they’ve gone. Great players. It’s not necessarily pressure, it’s just that I have expectations and goals for myself and I want to work hard to achieve those.”

Presti wouldn’t say adding Holmgren marked a shift from collecting assets to pushing forward, but he feels Holmgren is an important piece in the Thunder's future plans. Oklahoma City went 24-58 last season and missed the playoffs for a second straight year after a decade-long run of success that included four trips to the Western Conference Finals. Now, they have a player with star potential to go with the young talent they have been developing in recent years.

“We want to have a long run of sustained success that’s going to take some time to get to that point,” Presti said after the draft. “We think he’s (Holmgren) a critical part to it, but we’re going to have to put him in positions to be successful. I’m very confident he’ll be ready, willing and able to put in all the work. That’s one of the things about him that was really attractive.”

Of the past selections, Holmgren is most similar to Durant — a versatile, slender 7-footer who played one year of college ball. And the way he describes his game sounds a lot like what Durant does.

“Just going out there and being a great floor spacer, vertically and horizontally, whether it’s lob threats, space the floor from three, find them in transition — whatever it might be that coach draws up, I feel like I can go out there and help execute that and help make my teammates better as well as them helping me be better,” he said.

“I feel like I fit in pretty well with them,” Holmgren said. "Obviously, they’re great players. They can do a lot of things on the basketball court. Shai is known as a really good scorer. He can get anywhere on the floor that he wants to without much help, and Josh is a great passer. Both of them really shift the defense and move the defense.”

Holmgren has heard the comments that his 195-pound frame might be a hindrance in the league. But critics said that about Durant, too.

“People are going to question whatever you do, no matter what you do,” Holmgren said. “I have a lot of effort that I put into every single day, the work that I do to reach my goals, so I really don’t have extra effort left around to give to paying attention to what random people are saying on this talk show or that talk show.”