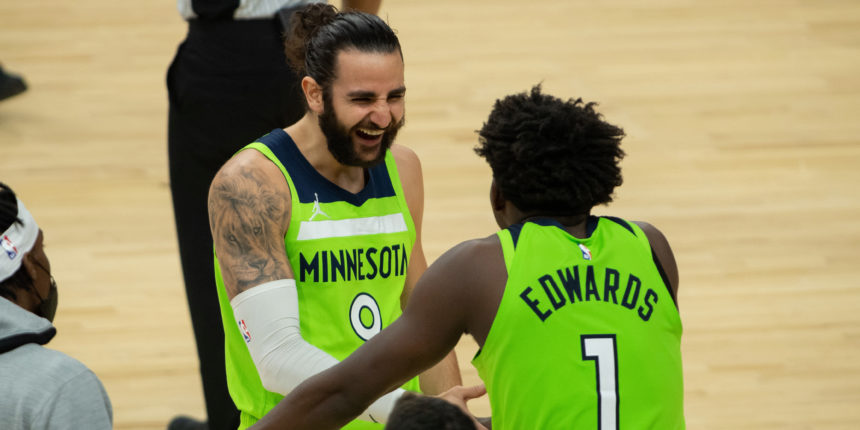 Edwards’ big fourth quarter helped spark the win for Minnesota, which extended its season-long winning streak to four games. The Timberwolves rookie scored 18 of his 25 points in the fourth.

Stephen Curry overcame early shooting struggles to finish with 37 points for Golden State. Andrew Wiggins added 27 points against his former team in his first game in Minnesota since he was traded by the Timberwolves last season.

Karl-Anthony Towns scored 22 points and grabbed 11 rebounds for the Wolves. Towns and Juancho Hernangomez hit consecutive 3-pointers to extend Minnesota’s lead to 10 in the fourth quarter. The Wolves never relinquished the lead.

Curry scored 16 points in the third to give Golden State a two-point lead after three. He capped his big quarter with a four-point play that put the Warriors up 91-89. Curry finished 11-of-27 from the floor and 6-of-17 from 3-point range.

Wiggins gave the Warriors a lift early, scoring 10 points in the first quarter and finishing the first half with 18. He was acknowledged on the Target Center video board pregame and received a nice ovation from the fans in attendance.

Golden State tied the game just before the half but a Towns dunk over former teammate Wiggins with 2.4 seconds left sent Minnesota into the locker room with a 60-58 lead.

D’Angelo Russell sparked Minnesota late in the first as the Wolves closed the quarter with a 12-0 run. Russell had five points and four assists in a six-minute stretch off the bench.

Warriors: Kelly Oubre missed Thursday’s game with a left wrist injury. He reaggravated an injury that caused him to miss five games earlier this year.

Timberwolves: Head coach Chris Finch said Thursday’s there’s a chance Malik Beasley could return for a few games at the end of the season. Beasley is currently sidelined with a left hamstring injury and resumed on-court workouts on Tuesday. ... G Jarrett Culver has been ruled out for the rest of the season with an ankle injury, the team announced Thursday. He’ll have arthroscopic surgery on May 7. Culver averaged 5.3 points in 34 games.

Warriors: Golden State’s four-game road trip continues with a game Saturday at Houston, followed by a pair of games at New Orleans.

Timberwolves: Minnesota continues its three-game homestand by hosting New Orleans on Saturday. The Timberwolves are 2-0 this year against the Pelicans.