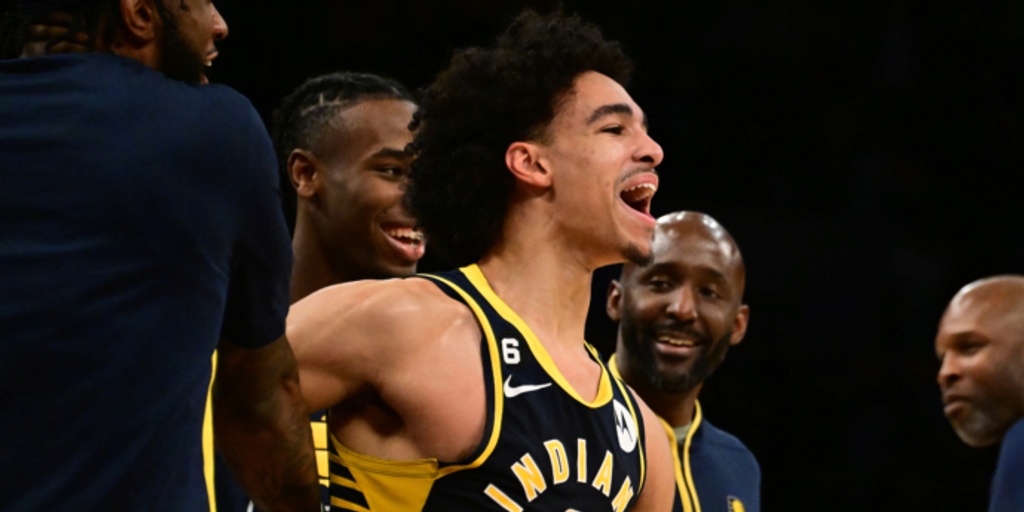 LOS ANGELES (AP) — Rookie Andrew Nembhard hit a 3-pointer at the buzzer, and the Indiana Pacers rallied from a 17-point deficit in the fourth quarter for a stunning 116-115 victory over the Los Angeles Lakers on Monday night.

Tyrese Haliburton scored 24 points and hit a tying layup with 39 seconds left for the Pacers, who trailed 101-84 early in the fourth. LeBron James hit a one-handed floater with 20.9 seconds left, and Myles Turner missed an ensuing 3-point attempt for Indiana — but Haliburton got the rebound and found Nembhard alone on the perimeter, where the Canadian second-round pick from Gonzaga drilled his fourth 3-pointer of the night.

Haliburton had 13 assists while rookie Bennedict Mathurin added 23 points for the Pacers, who avoided their first back-to-back losses since October in dramatic fashion.

Anthony Davis had 25 points and 13 rebounds for the Lakers, who were well on their way to their sixth victory in seven games before their defense faltered down the stretch. Davis missed one of two free throws right after the Pacers missed three consecutive layups and tip-in attempts in the final minute, leaving the door open for Nembhard's eventual heroics.

James had 21 points and seven rebounds, while Russell Westbrook scored 17 of his 24 points in the second half.

Los Angeles opened its biggest lead two minutes into the fourth quarter, but Indiana responded with a 10-0 run and eventually trimmed the deficit to one point with 2:11 to play. The Pacers missed three consecutive layups and tips that would have put them ahead early in the final minute, and Davis hit one free throw before Haliburton's tying layup with 39 seconds left.

Davis returned to the lineup after a one-game absence to rest his bruised left calf, while James played his third straight game after a five-game absence with a groin injury.

James scored 10 points in an early-game outburst, but he went to the locker room midway through the first quarter after he rolled his left ankle when he stepped backward onto Haliburton’s foot. James returned to start the second quarter.

Pacers: Buddy Hield had 15 points, missing five of his six 3-pointers. ... Injured C Daniel Theis played alongside Schröder on Germany's third-place EuroBasket team this summer. Theis has yet to make his Pacers debut after knee surgery.

Lakers: Patrick Beverley served the third game of his three-game suspension for shoving Phoenix's Deandre Ayton last week. Schröder made his third straight start in Beverley's place and got eight points and four assists. ... Lakers fan Jaime Murry hit a shot from well behind midcourt to win $75,000 between the third and fourth quarters. He celebrated by hitting the Griddy and getting hugs from much of the Lakers' roster.

Westbrook, Hield and Turner were the main characters in months of trade rumors between these clubs, but no deal was ever reached. Turner’s positional versatility and Hield’s outside shooting seem to make them ideal fits for the current Lakers, but the 17-time champions have been unwilling or unable to meet Indiana’s price.

Pacers: At Sacramento on Wednesday.