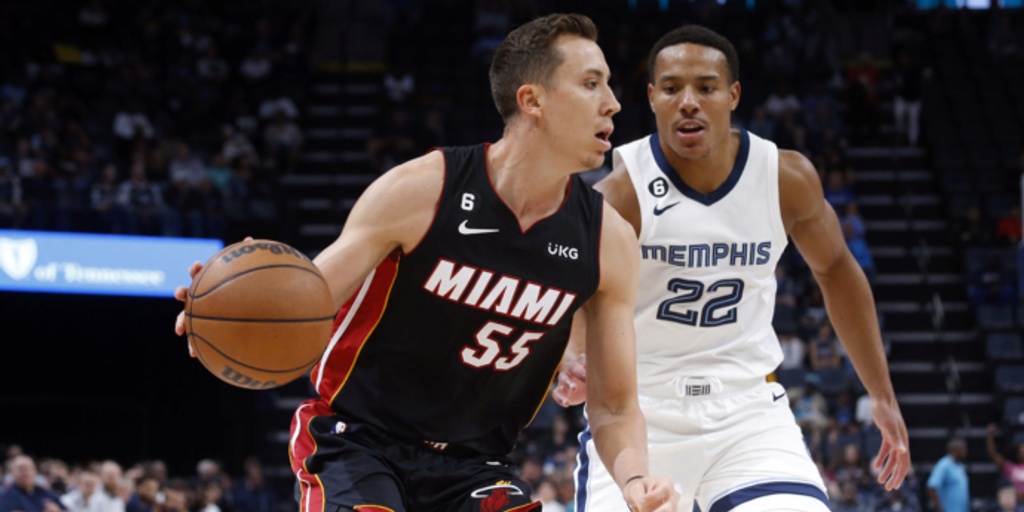 MEMPHIS, Tenn. (AP) — Duncan Robinson scored 29 points to lead the Miami Heat to a 111-108 victory over the Memphis Grizzlies on Friday night.

Robinson shot 7 for 11 from the field, including 5 for 7 on 3-pointers. Jamal Cain, an undrafted rookie who played his last college season at Oakland University, scored 19 points, and Nikola Jovic — the 27th overall pick in the draft — scored 13 points as the Heat played the game with their reserves.

The Heat, playing on the road for the second night of a back-to-back, sat their starters, including Jimmy Butler, Kyle Lowry and Bam Adebayo.

Meanwhile, Memphis was at full strength, except for forward Jaren Jackson Jr., who is out for a couple of more months recovering from a stress fracture in his right foot.

While the Grizzlies played their regular starters, there were some reserves who took the night off, tightening the rotation. Bane played 28 minutes, while Morant and Brooks logged 26 minutes each.

The Heat took their lead with a rally spanning the second and third quarters and held on at the end when both teams had bench players in the game. Memphis missed a pair of 3-point attempts to tie the game in the closing 10 seconds

Justin Jackson added 16 for the Celtics, and Payton Pritchard scored 15. Noah Vonleh had 14 points and 13 rebounds.

The Celtics sat some of their starters, including Jayson Tatum, Al Horford and Marcus Smart. However, Blake Griffin — signed this week — finished with seven points and nine rebounds in 16 minutes in his Celtics debut.

Banchero, the 6-foot-10 forward out of Duke, shot 6 for 13 from the field and had five rebounds. Mo Bamba had 13 points and seven rebounds for the Magic.

Christian Wood scored 23 points on 8-for-12 shooting. Luka Doncic had 16 points in 18 minutes, making 6 of 8 shots from the field, and also had five assists.

Toppin was 4 for 7 on 3-pointers as the Knicks improved to 2-0 in the preseason. RJ Barrett scored 18 points, while Jalen Brunson and Immanuel Quickley finished with 17 points each.

Coby White and Javonte Green added 15 points each for the Bulls, while Nikola Vucevic finished with 14 points and seven rebounds.

Tari Eason, the seventh overall pick in last summer’s draft out of LSU, had 24 points and eight rebounds to lead host Houston.

Jalen Green added 23 points for the Rockets, while Kevin Porter Jr. had 15.

Naji Marshall had 14 points on 5-for-12 shooting, including just 3 for 12 on free throws for the Hornets. Alvarado shot 12 for 18 from the field.

Saddiq Bey led the Pistons with 23 points, while Isaiah Steward and Jaden Ivey finished with 14 apiece.