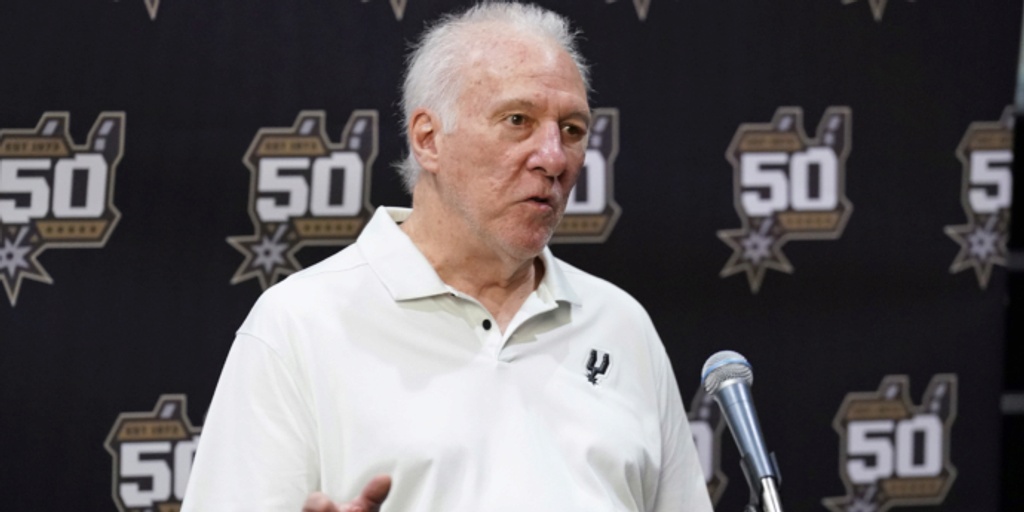 SAN ANTONIO (AP) — Tim Duncan, Manu Ginobili and Tony Parker may be walking through that door at the San Antonio Spurs' practice facility, but they are only coming to visit.

In their place on the court is a bunch of fresh-faced youngsters who may want to wear a name tag to curry favor with 73-year-old coach Gregg Popovich.

“I walked into the film room today, and there was this young kid sitting there, and I said, ‘Who the hell are you?’” Popovich said. “Seriously. He said … I forgot his name already. I don’t know anybody.”

The franchise that won five NBA championships and matched a league record with 22 straight postseason appearances now has the equivalent of summer interns walking the halls.

Duncan, Parker and Ginobili have long retired and the team’s plans for life after The Big Three were sidetracked following the trades of young stars like Kawhi Leonard in 2018, Derrick White last season and Dejounte Murray this offseason.

Instead, the 50th edition of the Spurs is the youngest in franchise history. They are so young that 19-year-old Josh Primo has become a mentor to Jeremy Sochan, Malaki Branham and Blake Wesley – the 19-year-olds San Antonio drafted in the first round this year.

Still, it’s an opportunity to teach that Popovich seems to relish.

“He’s still around here smiling and excited each and every day,” said forward Keldon Johnson, who will turn 23 in mid-October. “We are already excited, high energy, yelling and things like that, but to see him come along with us and smiling is something big.”

Popovich considered last season a chance to develop his young roster. That plan is amplified this season with at least 10 players 25 or younger.

“I probably shouldn’t say this, but I’ll say it anyway, what the hell: Nobody here should go to Vegas with the thought of betting on us to win that championship,” Popovich said.

The Spurs do return veterans Jakob Poeltl at center, Doug McDermott at forward and Josh Richardson at guard. And some players are not giving up on the playoffs.

“I’m excited for us,” Spurs guard Devin Vassell said. “I think we can surprise a lot of people. I think that as long as we play together, and we play the right way, we’ll have a chance to win every game.”

Murray’s offseason trade to Atlanta caught his teammates by surprise. He became an All-Star last season and blossomed into the team’s leader at just 25.

Spurs general manager Brian Wright said the opportunity to acquire three first-round picks and a potential fourth in a pick swap was too good to pass up.

“Man, it was tough because he was like a big brother my first year,” Primo said. “He taught me so much. He was a great leader for me. Hearing it, I was shocked in a lot of ways. I had to understand that it is a great opportunity for him, but also for the rest of us. So, it works out for both parties.”

Johnson suffered a right shoulder posterior dislocation after getting “tangled up” with a teammate last week during workouts at the Spurs’ practice facility. Johnson will miss the start of training camp but expects to play in San Antonio’s season opener Oct. 19 against Charlotte.

Popovich said Poeltl will start at center for the Spurs but was non-committal about who else will join the six-year veteran.

Johnson should return to the starting lineup once he is healthy and Vassell started at guard following White’s trade to Boston last season. McDermott also returns after starting all 51 games he played last season.

Primo is expected to vie with two-year veteran Tre Jones to start at point guard.

Seeing Becky Hammon win the WNBA Championship in her first season as head coach of the Las Vegas Aces was “one of the greatest days of the summer for me and the coaches,” Popovich said.

After attending Game 2 of the WNBA Finals in Las Vegas, Popovich cheered from his San Antonio home as the Aces beat the Connecticut Sun to claim the franchise’s first championship.

“In a larger sense, I miss the heck out of her,” Popovich said. “She was there at every meal on the road when she was here and helped me be a better coach. She is a lovely person. Just any time we are able to spend with her is a real joy.”

Popovich was sporting a clean-shaven look after having a beard last season. The change wasn’t intentional, he admitted.

“I was trying to make it look like I was really trying to take care of it and I did something and half of it was gone and I had to shave it all off,” Popovich said.