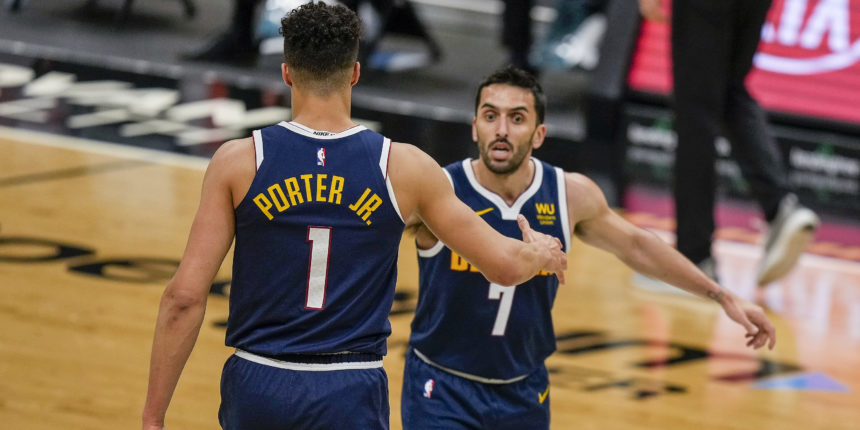 No Murray, no problem: Nuggets roar into playoffs against Blazers

So, Facundo Campazzo only meant to dish out some praise to his Denver teammate when asked about him recently.

“He's a terrible ... terrible?" the 30-year-old rookie Argentinian guard stammered as he fumbled for the right words in English.

No, responded a public relations employee off to the side of Campazzo's postgame Zoom interview.

“The opposite of terrible!” Campazzo hurriedly corrected through an embarrassed laugh. “He's a great shooter!”

Campazzo smoothly shook off his stumble just as he has all other rookie mistakes he's made this season.

Ultimately, nothing was lost in translation.

And for Denver, little has been lost in transition.

A common take after Murray tore his left ACL at Golden State on April 12 was that the Nuggets' title hopes were waylaid along with their rising star guard.

Monte Morris and Will Barton would soon join Murray on the sideline with pulled hamstrings and P.J. Dozier injured a hip.

Instead of dooming the Nuggets, however, the rash of injuries allowed coach Michael Malone to experiment with his lineups.

With Campazzo, newly signed Austin Rivers and others rotating through the ever-changing lineups, the Nuggets won 13 of their final 18 games. Malone was named the NBA's Coach of the Month for leading the Nuggets to a 13-3 record in April, including 9-2 after Murray got hurt.

The Nuggets, who now have Morris back at full strength and are hoping to get Barton back soon, maintained their hold on the West's No. 3 seed.

Still, they say they'll miss Murray, who averaged 31 points in the playoffs last year, when they face the sixth-seeded Portland Trail Blazers in the first round.

“Jamal was a big shot taker and a big shot maker for us,” Aaron Gordon said. “So, some of that offensive firepower for us is gone.”

While the banged-up Nuggets welcomed the nearly weeklong break before the series opener Saturday night in Denver, the Blazers hope the layoff didn't cool them off after winning 10 of their final 12 regular-season games.

Jusuf Nurkic was hurt two years ago when these teams met in the second round. So, this marks the first time Portland's center will square off in the playoffs against Jokic, who relegated him to the bench during their time together in Denver.

Nurkic said he has no hard feelings and is even pulling for Jokic to win the NBA's MVP award over Stephen Curry and Joel Embiid.

"He has really ridiculous numbers, so I think he’s supposed to be the MVP,” Nurkic said.

Malone called the Nurkic trade to Portland in 2017 a win-win as both big men and both teams have thrived since their split.

“We tried to play them both together early on, didn't have the results that we necessarily wanted,” Malone said. “And the reality is the trade has benefitted Nurk, it's benefitted us.”

Jokic blamed their clash on youth: “In that moment we didn't know what to do," he said. "I think now we could play together.”

This marks the first time Carmelo Anthony will face the team that drafted him in a playoff series since he forced his way out of Denver a decade ago.

Coming off the bench this season, Anthony leads the Blazers’ second unit with a 13.4-point scoring average.

“What he’s done for us in a year and a half has been what we needed. This year, the role that he’s had off the bench has been a big part of the reason why we are where we are,” Blazers coach Terry Stotts said.

Portland already had one of the league's top backcourts in sharpshooters Damien Lillard and CJ McCollum. Now they also have Norman Powell, who has averaged 17 points a game since the Trail Blazers acquired him from Toronto at the trade deadline.

Powell opens up even more long-range shots for Lillard and McCollum.

“Those three guards put a tremendous amount of pressure on your defense, especially from the 3-point line,” Malone said. “So, that would probably be the No. 1 concern is can we guard the 3 somehow, some way?”