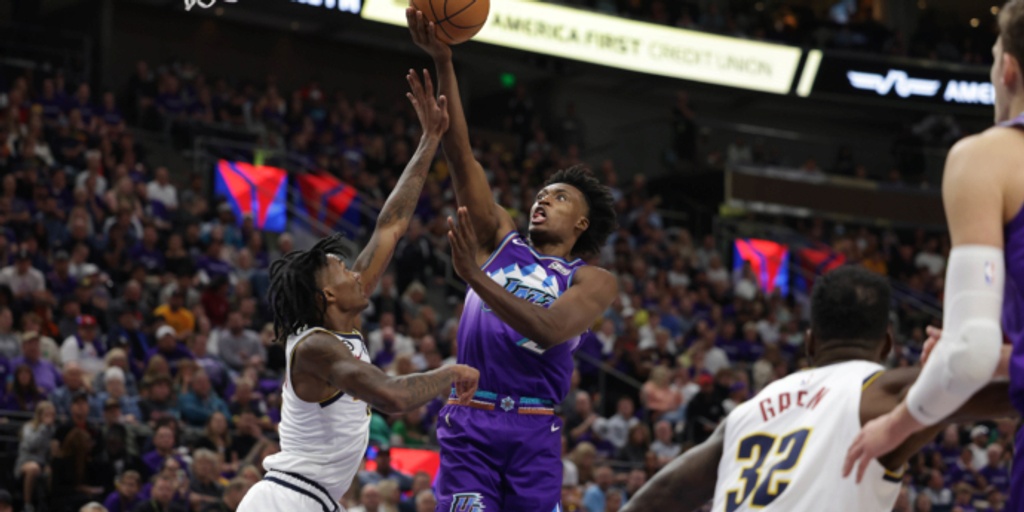 SALT LAKE CITY (AP) — Nobody is expecting much from the Utah Jazz. That’s just the way they want it.

“We all have chips on our shoulders. Everyone here wants to show people that we’re a tough team,” Collin Sexton said.

Sexton scored 20 points, Lauri Markkanen added 17 and the new-look Jazz beat the Denver Nuggets 123-102 on Wednesday night in the season opener for both teams.

New Jazz coach Will Hardy, a former assistant with the Boston Celtics, won his first game.

“There’s a real camaraderie with this group even at this early stage because I think all of our guys understand that none of them can do it on their own,” Hardy said.

His players celebrated the victory with a water bottle bath and presented their coach the game ball as he got emotional.

“We were just so happy for him. He deserves it. He’s given a lot of guys a lot of confidence to go out there and play the right way,” Mike Conley said.

It was a surprising result for a Denver team built for a title run and the Jazz, who are rebuilding after trading cornerstones Donovan Mitchell and Rudy Gobert.

“In that first half (the Jazz) outworked us and I think to a man everyone in (our) locker room would agree,” Denver coach Mike Malone. “We looked like a different team, felt like a different team (in the second half). But in this league you can’t pick and choose when you play.”

Rudy Gay scored 16 points, Malik Beasley had 15 and Conley, the lone returning starter from last season, had 13 as Utah had seven players in double-figure scoring. Rookie Walker Kessler had 12 points and 10 rebounds, and the Jazz shot 50.6% from the field.

Nikola Jokic scored 27 points and Aaron Gordon had 22 for Denver but they weren’t happy with their first game.

“Even when we provided open looks, we didn’t shoot those. I think the mentality was that we didn’t know what to do,” Jokic said.

The Jazz, as might be expected with a young team with 10 new additions, nearly unraveled after leading comfortably most of the game. A series of turnovers and missed rotations allowed the Nuggets to claw back from 24 points down.

Jokic, the two-time reigning Most Valuable Player, brought the Nuggets back to 105-98 on a running hook.

But Gay and Beasley made back-to-back 3-pointers while the Nuggets shook their heads and Beasley did an extended shimmy.

“It’s going to help us down the road to build that confidence that if I’m open, I know my teammates are going to get the ball to me,” said Sexton, who missed most of last year with a torn meniscus.

“The Bull is back,” he said, referring to his nickname, “Young Bull.”

Key players Jamal Murray and Michael Porter Jr. are also back from injuries but the Nuggets looked rusty, especially on defense as they allowed a 14-0 run to start the second quarter and 27-7 overall surge that put the Jazz in command.

When Sexton hit a 3-pointer late in the second quarter, the Jazz led 68-44. Despite Gordon’s 16 points and Jokic’s 14, the Nuggets trailed 75-53 and the Jazz left for the halftime break to a standing ovation from a stunned, yet energized crowd.

Murray, who missed all of last season due to knee surgery, scored 12 points on 5-for-13 shooting.

“I was shaking off the rust obviously. I got some great looks, rushed into them hoping just to get a little rhythm,” Murray said.

He played 25 minutes, the most he has played in a full scrimmage or preseason game since the injury.

“Jamal played exactly (how) I expected. ... The guy hasn’t played in a long time. This is his first NBA game since April 12th two years ago. … I’m going to stay with him. I know what he’s capable of,” Malone said.

Nuggets: Jokic was visibly frustrated, committing an offensive foul and then getting burned by Sexton on consecutive possessions for baskets late in the game. … The Nuggets outscored the Jazz in the paint, 68-42. … Denver committed seven turnovers in the fourth quarter.

Jazz: Clarkson welcomed the Jazz fans before the game and reminded them that WNBA star Brittney Griner remains in a Russian prison and needs the fans’ “blessings” … At one point, Vanderbilt was outrebounding all of the Nuggets, 12-9. But he picked up fouls four and five early in the third quarter before he could be substituted. … Kelly Olynyk got a technical in the fourth quarter.

Jazz: At Minnesota on Friday night.