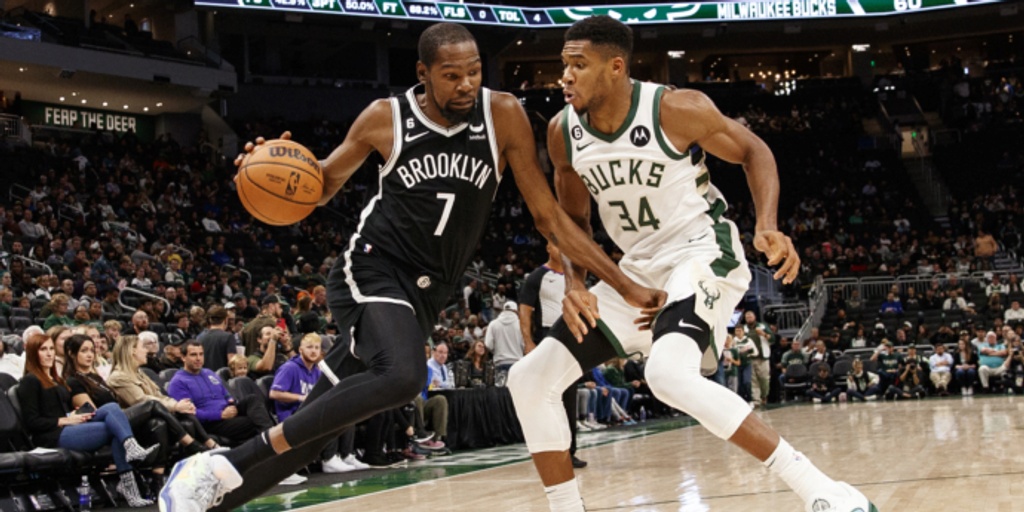 NBA's Eastern Conference has many contenders, many questions

Nobody can be certain how the Boston Celtics will perform under their third coach in three years, or whether James Harden can flourish in Philadelphia alongside Joel Embiid, or if Ben Simmons' first season playing with the Brooklyn Nets is already the last chance with Kevin Durant and Kyrie Irving.

Talent is spread all over the Eastern Conference. So are the question marks.

It's easy to see any of those teams, along with Milwaukee, Miami and perhaps others, finishing atop the conference. It's also easy to see some of them derailed by drama.

For now, everybody is looking at the positives.

“There’s a lot of good teams, a lot of talent in the East, but once the games are being played, that’s when you’ll declare who the best team is,” Durant said. “I think obviously first third of the season, halfway through, you’ll start to figure it out, but everybody feels great about their team around this time.”

Durant didn't feel great over the summer, telling the Nets he wanted to be traded. At the same time, the Nets were declining to give Irving a contract extension after he was unavailable for so much of last season because he refused to get vaccinated against COVID-19.

But the Nets' problems were old news by the time the Celtics, coming off an NBA Finals appearance, suspended coach Ime Udoka just before training camp for at least this season for multiple violations of team policies involving a woman in the organization. Assistant Joe Mazzulla takes over for Udoka, who just finished his first season after replacing Brad Stevens.

Despite that, 76ers coach Doc Rivers still looks at the Celtics, along with the Bucks, as teams that start 2022-23 in a strong spot. While his team strives to get the best out of former MVP Harden, who was swapped for Simmons at the February trade deadline, the top players on rival squads (Giannis Antetokounmpo, Khris Middleton and Jrue Holiday in Milwaukee; Jayson Tatum, Jaylen Brown, Marcus Smart and Al Horford in Boston) have played plenty of big games together.

A look at the East, in predicted order of regular-season finish:

1. Milwaukee — The Bucks should be driven to get home-court advantage after their title defense ended with a Game 7 loss at Boston in the second round.

2. Boston — The coaching situation is an unknown. The players are not.

3. Philadelphia — The 76ers will hope for more than the 21 points Harden averaged for them last season.

4. Miami — Had the East's best record and was a game away from the NBA Finals last season.

5. Chicago — Bulls were in great shape last year until injuries to Zach LaVine and Lonzo Ball.

6. Cleveland — Donovan Mitchell and Darius Garland in the backcourt with Jarrett Allen and Evan Mobley up front should be good enough for a team that just fell short of the playoffs last season.

7. Brooklyn — Too explosive to be stopped. Maybe too small to stop others.

8. Toronto — Needs good bench play to keep the key starters from wearing down.

10. New York — Jalen Brunson takes over at the point and tries to get the best out of Julius Randle and RJ Barrett.

12. Washington — The potential is there, as long as Bradley Beal and Kristaps Porzingis are on the court together enough.

13. Indiana — Rick Carlisle for so long had playoff teams in Dallas. He doesn't in Indiana.

14. Detroit — With Cade Cunningham, No. 5 pick Jaden Ivey and other young talent, Pistons won't be in this position in a few years.

Besides Mitchell, the All-Star guard who was traded from Utah to Cleveland, key additions in the East include Murray (traded to Atlanta from San Antonio), Malcolm Brogdon (Boston) and Brunson (New York).

Toronto's Scottie Barnes edged fellow forward Mobley of Cleveland by 15 points in voting for Rookie of the Year, the closest finish under the current voting format that began with the 2002-03 season. Throw in Detroit's Cunningham, the 2021 No. 1 pick, and there's some potential sophomore sensations in the East.

Both LaMelo and Lonzo Ball are battling injuries headed into the regular season. LaMelo, the former Rookie of the Year, has a sprained ankle that has his availability in question for Charlotte's opener. Lonzo won't be ready in Chicago after another procedure last month because he still experienced pain in his left knee after having surgery last season, when he didn't play after Jan. 14.

Players arriving to add some needed physicality to contenders include P.J. Tucker in Philadelphia, Markieff Morris in Brooklyn, Andre Drummond in Chicago and Robin Lopez in Cleveland.