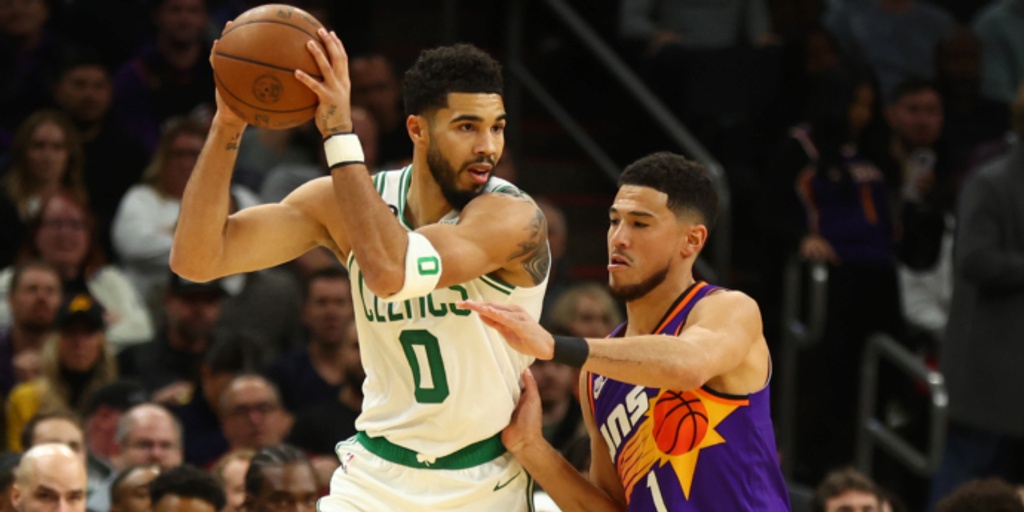 The Celtics won for the eighth time in nine games, improving their NBA-best record to 21-5. The Suns — who came into the game with the best record in a crowded Western Conference race — lost for the third time in four games.

The expected showdown between two of the league’s top teams never materialized with the Celtics leading by 45 points. The Celtics took a 31-21 lead after one quarter over the cold-shooting Suns, who missed all eight of their 3-point attempts.

Boston continued to build its lead in the second, taking a 69-42 lead into the break. Brown led the Celtics with 17 points in the first half, while Tatum scored had 14. Grant Williams and Brogdon both added 12.

The second half was essentially an afterthought. Tatum hit a free throw with 7:01 left in the third to push Boston’s advantage to 40.

The Suns welcomed back All-Star point guard Chris Paul, who missed the past 14 games with a sore right heel. That’s good news for the team’s long-term prognosis, but it didn’t help much Wednesday. Josh Okogie led the Suns with a career-high 28 points off the bench.

Seth Curry added 20 points on 8-for-11 shooting to help the Nets won for the fifth time in six games.

Terry Rozier scored 30 points and Kelly Oubre Jr. had 29 for the Hornets. They have lost three straight and seven of 10.

James sat out because of a sore left ankle, one night after he played 36 minutes in a 116-102 loss at Cleveland. Davis left after one quarter Tuesday night because of a non-COVID illness.

Some in the sellout crowd of 19,800 booed when the names of the injured players were displayed on the video board before the game.

Fred VanVleet also had 25 points for Toronto. Dennis Schroder led the Lakers with 18.

Jordan Clarkson led Utah with 22 points. Fontecchio finished with a career-high 18 points. A rookie from Italy who will be 27 on Friday, he made four 3-pointers.

Jordan Poole tied a season high with 36 points for Golden State and Jonathan Kuminga had a season-high 24.

The streak is Milwaukee’s longest active streak against an opponent. The Bucks have won 12 straight against Orlando.

Brook Lopez had 17 points and nine rebounds and Khris Middleton added 14 points for the Bucks. They won their third straight to improve to 18-6.

Domantas Sabonis had 23 points and 12 rebounds for the Kings, who had won their last three. Harrison Barnes had 20 points, and Malik Monk added 16.

Morant’s triple-double was his second this season and the seventh of his career, and tied a career high for rebounds. Dillon Brooks added 24 points and Brandon Clarke finished with 17 points as the Grizzlies won their season-best fourth straight.

NEW YORK (AP) — Julius Randle had 34 points and 17 rebounds and New York capitalized on another key Atlanta injury to coast past the Hawks.

Trae Young showed up wearing sneakers in the Knicks’ blue-and-orange colors with “King of Broadway” on them, but he was left largely having to win this one alone after the Hawks lost a third starter when Dejounte Murray sprained his left ankle after 3 1/2 minutes.

Already without starting forwards John Collins and De’Andre Hunter, the Hawks trailed by as many as 28 points in their fifth loss in seven games. Young finished with 19 points and six assists.

MINNEAPOLIS (AP) — D’Angelo Russell had 15 of his 28 points in the fourth quarter, Anthony Edwards scored 26 points and Minnesota held on to beat Indiana.

Rudy Gobert added 16 points and 20 rebounds for Minnesota, which blew a 23-point lead and had to overcome an eight-point deficit. The Timberwolves — who had 23 turnovers — won for just the second time in six games.

Banchero, the top overall pick in the NBA draft, made all six of his free throws in the final seven seconds of overtime, rallying the Magic from a 111-110 deficit.

Terrance Mann came off the bench to lead the Clippers with 19 points.

CHICAGO (AP) — DeMar DeRozan scored 15 of his 27 points in the fourth quarter, Nikola Vucevic had 25 points and 11 rebounds and Chicago beat Washington.

The Wizards lost their fourth in a row and played without leading scorer and three-time All-Star Bradley Beal. He strained his hamstring Sunday in a loss to the Los Angeles Lakers.

Kristaps Porzingis had 28 points and nine rebounds for Washington.

NEW ORLEANS (AP) — Zion Williamson had 29 points and 10 rebounds and New Orleans beat Detroit for its fifth straight victory and 10th in 12 games.