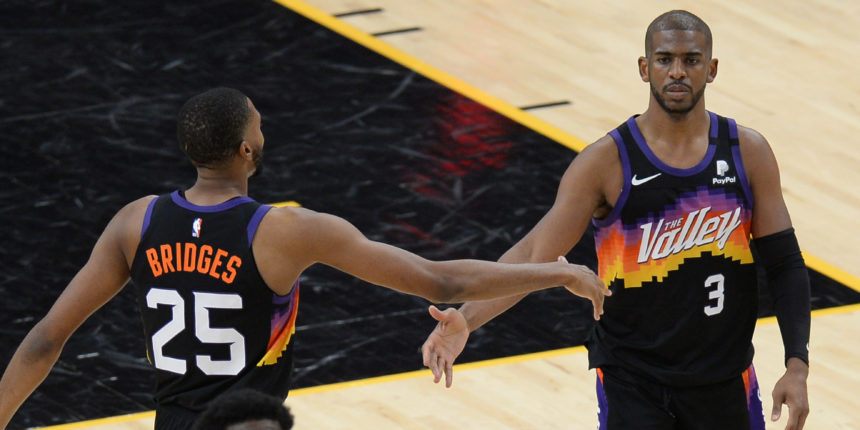 Chris Paul scored 28 points, Devin Booker added 21 and the Phoenix Suns beat the Los Angeles Clippers 109-101 on Wednesday night to clinch a spot in the playoffs for the first time in 11 years.

The Suns finally figured out a way to beat the Clippers, who won the first two games of the season series. Phoenix didn't trail the entire game but needed a fourth-quarter push to turn back a Los Angeles rally.

The Suns took an 86-80 lead into the final quarter. The Clippers pulled within 93-92 midway though the fourth but Paul scored three consecutive tough baskets to give Phoenix some space.

The 35-year-old Paul continued to play excellent basketball in his 16th NBA season, shooting 10 of 15 from the field, dishing 10 assists and generally looking like a player a decade younger. He was serenaded with "MVP! MVP!" chants from the crowd by the end of the fourth.

A near flawless outing from CP3 helps the @Suns clinch a Playoff spot in the win! 😤

The Suns improved to 44-18 while the Clippers fell to 43-21. The teams are currently ranked No. 2 and 3, respectively, in the Western Conference standings.

The Suns jumped out to a 39-31 lead after one quarter, making 7 of 9 shots from 3-point range. Phoenix pushed the lead to 14 points by midway through the second before settling for a 63-53 halftime advantage.

Frank Kaminsky led the Suns with 13 points before the break while Booker had 12. George scored 16 for the Clippers. The Phoenix bench outscored LA's reserves 28-8 in the first half.

The Suns are able to have about 5,500 fans these days at Phoenix Suns Arena, slowly increasing capacity as the COVID-19 pandemic wanes.

It was a festive atmosphere for Wednesday's game that felt almost pre-pandemic, with shirtless fans with S-U-N-S dancing in the stands and huge cheers when Paul hit his crucial buckets in the fourth.

The Suns haven't been in the playoffs since 2010, when Steve Nash and Amar'e Stoudemire made the team a huge draw in the desert.

Clippers: Host the Nuggets on Saturday.

Suns: Host the Jazz on Friday.