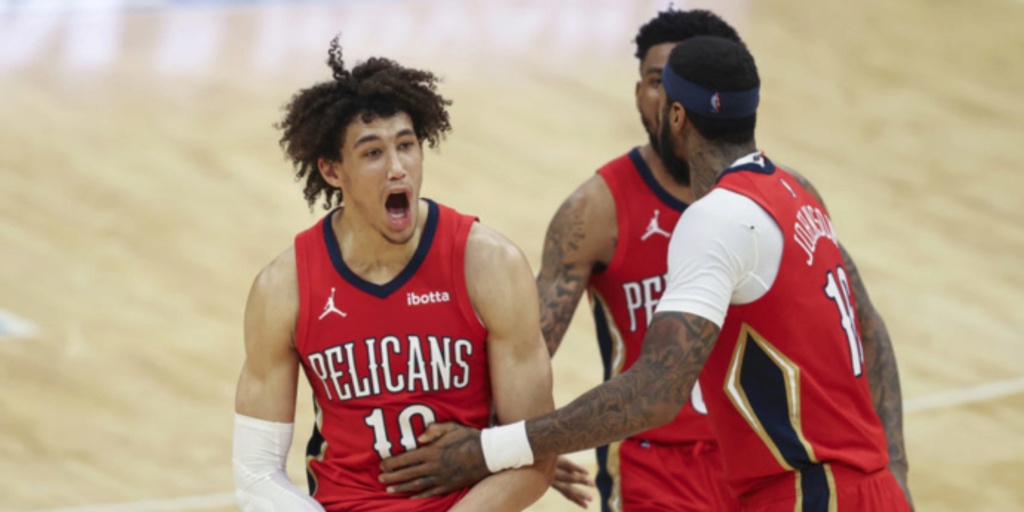 The New Orleans Pelicans aren't ready to concede a spot in the play-in tournament just yet.

Eric Bledsoe had 24 points and 11 assists, Jaxson Hayes added 18 points and six blocks and the short-handed Pelicans kept their postseason hopes alive with a 112-110 come-from-behind victory over the Charlotte Hornets on Sunday night.

James Johnson added 17 points and Willy Hernangomez had 16 rebounds for the Pelicans, who pulled within 1 1/2 games of the San Antonio Spurs for the 10th spot in the Western Conference. The Spurs have five games left; the Pelicans four.

It was the Pelicans’ fourth win in the last six games.

“The one thing I have said about this team is we are giving ourselves a chance to win each and every game,” Bledsoe said. “We are trying to play every game and learn from it.”

Terry Rozier scored a career-high 43 points on 16-of-26 shooting, including seven 3-pointers, but it wasn’t enough as Charlotte failed to clinch a spot in the Eastern Conference play-in tournament.

The Pelicans won despite playing without Zion Williamson, Brandon Ingram and Steven Adams due to injuries. The Hornets were without Devonte Graham, Miles Bridges and Gordon Hayward.

In the second matchup this season between the Ball brothers, LaMelo Ball had 22 points and five assists for Charlotte but missed two key free throws late in the game and had five turnovers. Lonzo Ball had 12 points and six assists.

At one point, LaMelo tried to steal the ball from his older brother near midcourt and then dived after it in the backcourt, only to be charged with a foul.

With the Hornets trailing by two with two minutes left, LaMelo Ball made a 15-foot floater to the tie it at 107. But Hayes responded with a layup to put the Pelicans back in front. Ball was fouled on the other end, but missed two free throws with 1:29 left.

New Orleans built a 111-107 lead when Hayes scored on a feed from Nickeil Alexander-Walker drive through the lane with 12.7 seconds left to make it a two-possession game.

Rozier said the Pelicans defense in the second half was the difference in the game.

“They just ramped up their pressure, they were keying in on me, every time I was coming off a down screen or a ball screen they were up on me," Rozier said. “That personnel is what I’m going to see the rest of this season and the play-in.”

New Orleans was able to erase a 14-point deficit by keeping the Hornets off the offensive boards in the second half. Charlotte had 13 second-chance points in the first half, but none in the second.

Pelicans: Alexander-Walker made a lightly contested 58-footer at the buzzer at the end of the first quarter. ... Wes Iwundu received a technical foul and was ejected in the fourth quarter for arguing a call.

Hornets: Cody Zeller had another solid game with 17 points on 6-of-9 shooting and eight rebounds. ... Graham sat out due to knee soreness. ... Outrebounded 28-14 in the second half.

“One thing about Jax, he might tend to foul a little bit but he never gives up on a play,” Bledsoe said. “His energy is big.”

Van Gundy said what he likes the most about Hayes' play right now is his consistency, saying he has taken a “major step” the last two games. The 6-foot-11 center scored had 19 points and three blocks in a 109-107 loss to the Philadelphia 76ers on Friday night.

Said Hornets coach James Borrego: “You got to give Hayes a ton of credit, that’s a shot blocker for you. He turned that entire fourth quarter – his presence, his blocked shots and he affected a lot of our stuff in the paint in the fourth quarter.”

Pelicans: Visit the Memphis Grizzlies on Monday night on the second night of a back-to-back.