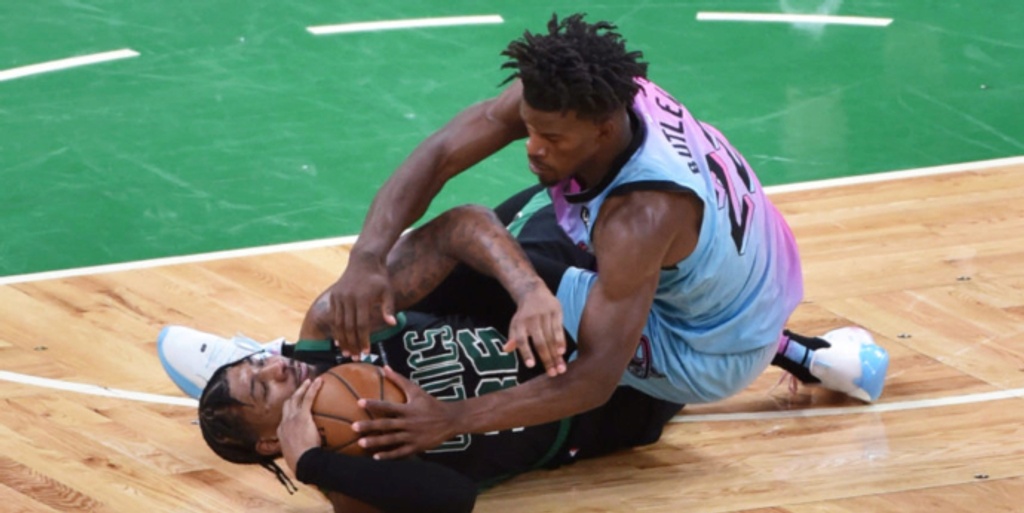 BOSTON (AP) — Jimmy Butler had 26 points and 11 assists to help the Miami Heat hold off the Boston Celtics 130-124 Sunday as the teams fight for position in the tight Eastern Conference playoff race.

Jimmy Butler was ON today, delivering his second-straight game with 55+ FPTS as the @MiamiHEAT win it on ESPN.

Duncan Robinson added 22 points and Bam Adebayo finished with 20 for Miami, which increased its lead over Boston to two games for sixth place in the standings. The Heat (37-31) now have the same record as fifth-place Atlanta, but the Hawks own the head-to-head tiebreaker.

It is the first of two straight games between Miami and Boston, which meet for the final time during the regular season on Tuesday.

Evan Fournier scored 30 points to lead the Celtics (35-33), who have lost three out of four as they try to avoid the play-in round of the playoffs. Jayson Tatum added 29 points and Kemba Walker finished with 18.

Miami led by as many as 26 in the first half before Boston stormed back, opening the third quarter on a 22-8 run to get within 12 points.

The Celtics kept chipping away and trimmed it all the way to 113-107 with 4:51 to play on a layup by Kemba Walker.

Walker turned over on Boston’s next trip and Adebayo put it back in to get the lead back to double digits.

Miami was able to close things out at the free-throw line.

Boston struggled offensively without All-Star Jaylen Brown, who missed his third straight game with a sprained right ankle. Big man Robert Williams III tried to play through turf toe in his left foot, scoring four points in 11 minutes in the first half. But he labored on it at times and was scratched for the second half.

Defensively Miami tried to take the ball out of Tatum’s hands as much as possible, sending multiple double-teams his way and limiting him to just two field goal attempts in the opening 12 minutes. Tatum’s teammates combined to shoot just 7 of 17 from the field and 1 for 8 from 3.

It set the tone for a half in which several of Boston’s empty offensive possessions turned into 14 fast break points for Miami.

Boston left the floor at halftime to a chorus of boos from the pandemic-limited TD Garden crowd.

Heat: Robinson has now a 3-pointer in 44 consecutive games. He set the franchise record, connecting on 57 consecutive 3s last season. … Victor Oladipo remained sidelined with right knee soreness, missing his 16th consecutive game. He’s appeared in only four games for the Heat since being acquired at the trade deadline by Miami.

Celtics: The 79 points allowed in the first half was a season high by an opponent. … Have now allowed 70 or more points in a half three times over their last five games (Portland 71, San Antonio 77).

Meet for their final matchup on Tuesday.