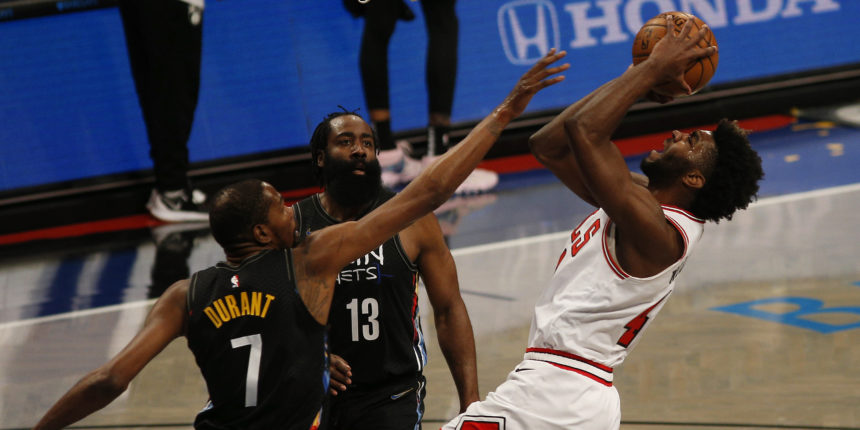 Nets finally get Harden, Irving and Durant back together, beat Bulls 105-91

Kyrie Irving scored 22 points while playing with Kevin Durant and James Harden for the first time in three months, leading the Brooklyn Nets to a 105-91 victory over the Chicago Bulls on Saturday.

The eighth appearance of the season for Brooklyn's Big Three wasn't particularly pretty, with the Nets falling quickly into a 12-0 hole. But they had some sharp stretches and won their fourth straight, improving to 6-2 with their three All-Stars in the same game.

Durant shot just 4 for 17 but finished with 12 points, nine rebounds and six assists. Harden had seven assists, five points and five rebounds while playing 25 minutes in his second game back from a hamstring injury.

But Brooklyn got 19 points and five 3-pointers from Jeff Green, while Bruce Brown had 16 points and 12 rebounds. The Nets ensured they would remain second in the Eastern Conference heading into the final day of the regular season.

Patrick Williams scored 24 points for the Bulls, the highest total of his rookie season. Thaddeus Young added 19 points and 13 rebounds in Chicago's first game since being eliminated from contention for the play-in tournament Friday when Washington beat Cleveland.

Durant, Irving and Harden hadn't played together since Feb. 13, in a victory at Golden State. Durant began a 23-game absence with a left hamstring injury in the next game, and Harden just returned earlier this week from his own right hamstring injury that sidelined him 18 games.

They were far from their best, with Durant missing his first five shots and never really finding his stroke. The Nets then scored just 18 points on 8-for-22 shooting in the third quarter, when Durant and Irving were a combined 3 for 10.

The Bulls trailed by only four after a 10-0 run early in the fourth quarter while the Big Three all rested, but the Nets promptly put it away with a 15-2 response, the last seven after Durant and Harden re-entered, to make it 100-83.

The Nets rebounded from their slow start to get within one point after the first quarter, then used a 15-4 spurt late in the second to open their own 12-point lead. They were ahead 61-51 at the half, with Brown getting their final two baskets on follow shots.

Nets: Joe Harris missed his second straight game and won't play Sunday because of a left gluteal strain. Coach Steve Nash said it was a slight strain and Harris was expected to fully recover in time for the playoffs. ... Nicolas Claxton had 10 points and eight rebounds.

It was the first time the Big Three played in front of its home crowd. Fans were not allowed inside Barclays Center until Feb. 23.