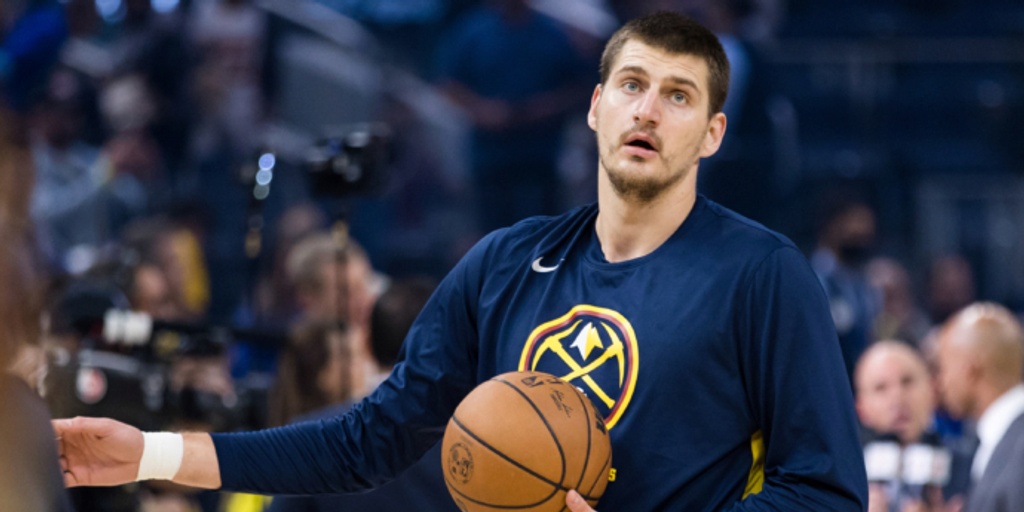 Nikola Jokic is about to start his chase toward something that hasn’t been done in nearly 40 years.

A player winning back-to-back NBA MVP awards is rare, something that’s happened only 13 times in league history. And having done that last season, Jokic — the cornerstone of the Denver Nuggets — is now trying for something even more unusual: winning it three years in a row.

The Nuggets aren't keeping that fact a secret from Jokic.

“No, I challenged him,” said Nuggets coach Michael Malone, who flew to Serbia last summer to surprise Jokic with his second straight award.

Jokic is obviously among the favorites. Until this past season, there had never been a stretch of four consecutive international MVPs in the NBA. Jokic changed that, winning each of the last two awards after Milwaukee’s Giannis Antetokounmpo (Greece) won in 2019 and 2020.

And right now, it would seem almost likely that the MVP streak for non-U.S.-born players goes to five in a row, with Jokic, Antetokounmpo, Dallas’ Luka Doncic (Slovenia) and Philadelphia's Joel Embiid among the favorites. Embiid was born in Cameroon and holds French and now U.S. citizenship.

FanDuel Sportsbook says Doncic is the favorite, just ahead of Embiid and Antetokounmpo. Jokic is fourth in terms of lowest odds, tied with Brooklyn’s Kevin Durant and just ahead of Memphis’ Ja Morant, Boston’s Jayson Tatum and Golden State’s Stephen Curry.

San Antonio’s Gregg Popovich has faced 163 different coaches so far in his legendary career. That list should reach at least 166 this season, with him slated to oppose Los Angeles Lakers coach Darvin Ham, interim Boston coach Joe Mazzulla and former Spurs assistant Will Hardy — now the coach in Utah — all for the first time.

There have been 322 coaches in NBA history, not including Popovich, who have coached at least 10 games. Popovich, the NBA’s all-time wins leader, has faced more than half of them — 50.3%, or 162.

Popovich turns 74 on Jan. 28, and he's the oldest active head coach in the NBA.

It's no secret that Popovich enjoys talking about and, of course, sipping fine wine. But six of the players on San Antonio's season-opening roster probably won't have much to say about that topic; Jordan Hall is 20 and the Spurs have five other players — Joshua Primo, Blake Wesley, Dominick Barlow, Malaki Branham and Jeremy Sochan — who are still 19 as this season begins.

The Spurs' group of 19-year-olds, incidentally, are five of the NBA's 17 youngest players who made rosters or got two-way deals to start the season.

Miami’s Erik Spoelstra — whose tenure with the Heat is the second-longest of any current coach in his current job, behind only San Antonio’s Gregg Popovich — should move into the top 20 on the NBA’s all-time wins list this season.

FIT TO BE TIED

In the regular season, the East went 226-224 against the West — bolstered by a 3-0 record on the final day with Chicago topping Minnesota, Boston rolling past Memphis and Atlanta defeating Houston.

Throw in Golden State’s 4-2 mark against Boston in the NBA Finals, and the final games-won tally for the full season was West 228, East 228.

The youngest player in the league entering this season is Detroit’s Jalen Duren, who was born Nov. 18, 2003.

Yes, that means he wasn’t born yet when some current players were already in the league. LeBron James and Udonis Haslem both played their 11th career games on the day Duren was born.

That isn’t the only age quirk this season.

There are 19 players currently on rosters who are older than Hardy (including Jazz players Rudy Gay and Mike Conley) and 23 players older than Mazzulla (including Boston forward Al Horford).

That said, the Thunder were a great bet last season. They covered in 63% of their games, just behind Memphis (64%) for the best such rate in the NBA. The worst was Portland, which covered 38% of the time.

This much is certain: The team that was favored in more games than anyone else last season won’t have that same distinction this year.

Last year, the Utah Jazz were favored in 73 of the 82 regular-season games, ahead of Phoenix (70), Milwaukee (66), Golden State (62), Boston (61) and Miami (59). With Donovan Mitchell now in Cleveland and Rudy Gobert now in Minnesota, the Jazz won’t be favored anywhere near that often this season.

LeBron James isn’t just on target to become the NBA’s all-time scoring leader this season; he’s 1,325 points behind Kareem Abdul-Jabbar, and at his average career scoring pace would need about 49 games to move into the No. 1 spot.

He’s also set to keep moving up a bunch of other lists, including:

— 3-pointers: James is 11th in NBA history with 2,140, three behind Portland’s Damian Lillard and the retired Paul Pierce, who enter this year tied for ninth.

— Seasons: James is entering Year 20. He’ll be the ninth player to appear in 20 seasons.

Miami’s Udonis Haslem will be the 10th player to appear in 20 seasons, assuming that LeBron James gets into a game before Haslem does.

Haslem is one of only three players to spend 20 years with one team, joining Dallas’ Dirk Nowitzki (21) and the Lakers’ Kobe Bryant (20).

If Carmelo Anthony, who is unsigned, gets into a game this season, that'll mark Year 20 for the former Syracuse great as well.

All players will wear Basketball Hall of Famer Bill Russell's No. 6 on the right shoulder of their jerseys this season, commemorating the life of the 11-time NBA champion with the Boston Celtics and civil rights activist who died this summer.

Also, all courts in the NBA will have a “6" on the sideline near the scorer's table. And no player who isn't already wearing No. 6 will be allowed to wear it ever again; Russell is the first to have his number retired across the entire league.

Among those still wearing the No. 6 jersey because they were wearing them previously: LeBron James, Washington's Kristaps Porzingis and Chicago's Alex Caruso — who wanted to change numbers as a tribute to Russell this season, but said he had his request denied.

At last year's pace, the 14 millionth point would be scored roughly 120 games into this season. or sometime in early November.