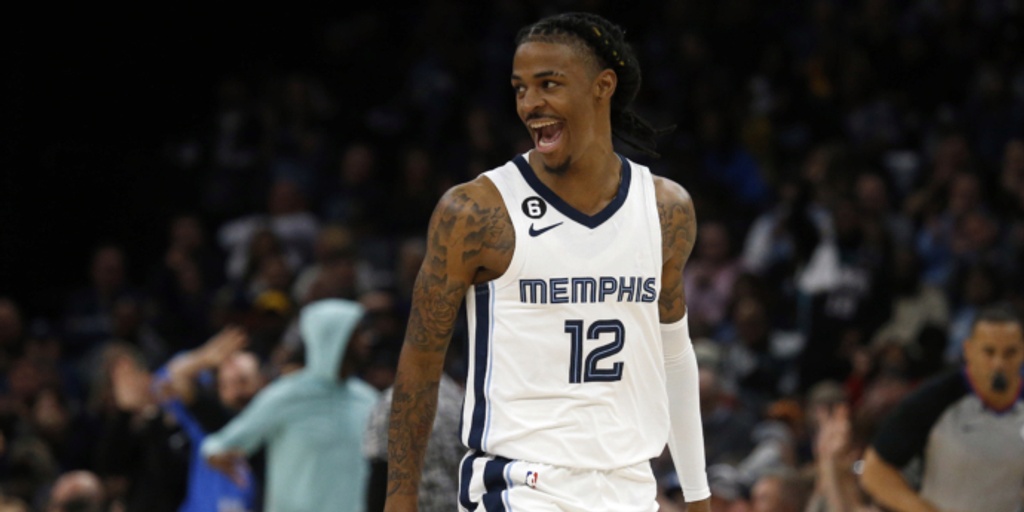 MEMPHIS, Tenn. (AP) — Ja Morant had 34 points and nine assists, and the Memphis Grizzlies beat the New York Knicks 115-112 in overtime on Wednesday night in the season opener for both teams.

Santi Aldama had 18 points and 11 rebounds for Memphis, and Desmond Bane finished with 16 points.

Julius Randle led the Knicks with 24 points and 11 rebounds, while reserve Cam Reddish added 22 points, making 9 of 15 shots from the field. Isaiah Hartenstein finished with 16 points and eight rebounds.

The Grizzlies took a 115-112 lead on Tyus Jones’ 3-pointer with 47.7 seconds left. Evan Fournier had a chance to send the game into a second overtime, but his shot from the left corner was off the mark.

Reddish's 3-pointer with three seconds left in regulation sent the game into overtime tied at 108. Morant’s layup with less than a second left in regulation was disallowed when an offensive foul was called on the Grizzlies guard.

Jalen Brunson had 15 points and nine assists in his regular-season debut for New York. Brunson was signed in free agency to help run the offense after the Knicks finished 11th in the Eastern Conference last season.

Memphis, meanwhile, is trying to replicate last season when it finished with the league’s second-best record. The Grizzlies were eliminated in the second round of the playoffs by Golden State, the eventual NBA champions.

The Knicks trailed by as many as 19 in the third quarter but rallied to take the lead on Brunson’s reverse layup with 3:32 left in regulation.

Knicks: Fournier’s 3-pointer in the third quarter gave him 244 for the Knicks, good for 24th place on the franchise list, passing Raymond Felton. ... Isaiah Hartenstein had a career-high seven offensive rebounds. ... RJ Barrett had 11 points, going 3 of 18 from the field.

Grizzlies: Play six of their next seven games on the road. ... Coach Taylor Jenkins came out for his pregame press conference in a black hoodie honoring WNBA star Brittney Griner, who is being held in Russia after police said they found vape canisters with cannabis oil in her luggage at Sheremetyevo Airport in Moscow. “We just want her to know that we are thinking about her," he said. "Praying for her, especially with her family. We’re really hoping that she comes home soon.” ... Aldama’s 11 rebounds were a career high.

Knicks: Have their home opener on Friday against the Detroit Pistons

Grizzlies: Travel to Houston to face the Rockets on Friday.