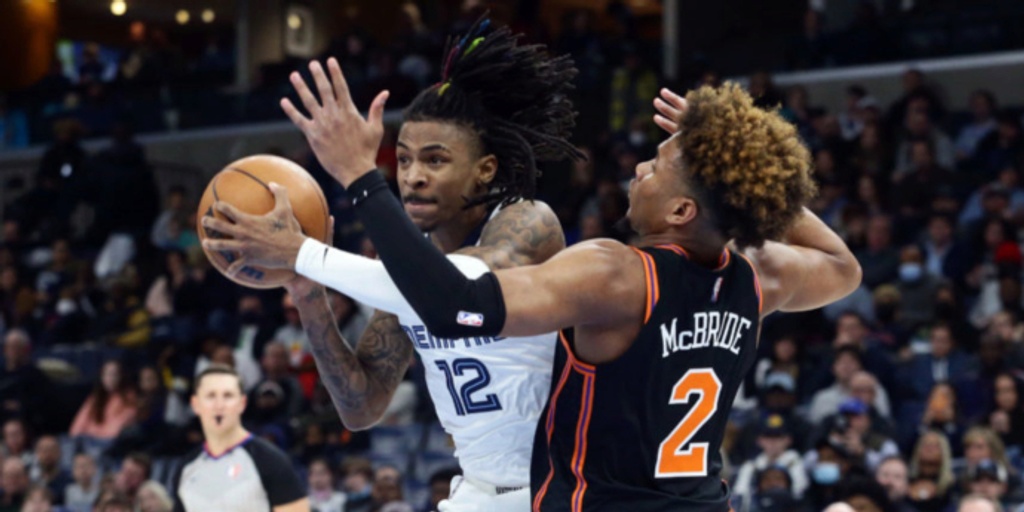 MEMPHIS, Tenn. (AP) — Ja Morant keyed a fourth-quarter rally by scoring 15 of his 37 points in the period to lead the Memphis Grizzlies to a 118-114 victory over the New York Knicks on Friday night.

Ziaire Williams and Jaren Jackson Jr. each finished with 13 points, with Jackson adding five blocks as part of a season-high 16 for Memphis, which won its second straight.

Julius Randle led the Knicks with 36 points, 12 rebounds and six assists, while RJ Barrett finished with 23 points. Alec Burks added with 18 points for New York, which had its three-game winning streak snapped.

In a game that featured plenty of lead changes and ties, the teams were still swapping advantages midway through the fourth. With Memphis trailing 106-105 with 3:54 left, Morant scored 10 straight points for Memphis to put the Grizzlies up 115-108 with less than a minute to play. The Grizzlies held on despite foul shooting issues at the end.

The Grizzlies, who defeated New York 120-108 at Madison Square Garden on Feb. 2, are trying to keep pace with Golden State for the second spot in the West. The win put Memphis up a half-game on the Warriors, who were idle Friday night.

New York, which had shooting troubles in the first half, immediately turned that around at the break by hitting nine of its first 12 shots in the second half. That contributed to a 14-1 run, erasing Memphis' advantage. The Knicks would eventually outscore the Grizzlies 40-26 in the period, carrying an 96-87 lead into the final frame.

Knicks: New York played without a number of players, including Nerlens Noel, Derrick Rose and Cam Reddish. Obi Toppin, who was listed as questionable earlier Friday, sat out his fifth straight game with a left hamstring strain. ... Barrett and Randle were a combined 10 of 27 in the first half.

Grizzlies: The win gave Memphis a sweep of the Knicks for first time since 2015-16 season. ..... G/F Dillon Brooks, who has missed the past 26 games with a left ankle sprain, appears close to returning. He has gone through some 5-on-5 sessions and should return “sometime in this upcoming road trip,” coach Taylor Jenkins said Friday.

Knicks: Play at Brooklyn on Sunday.