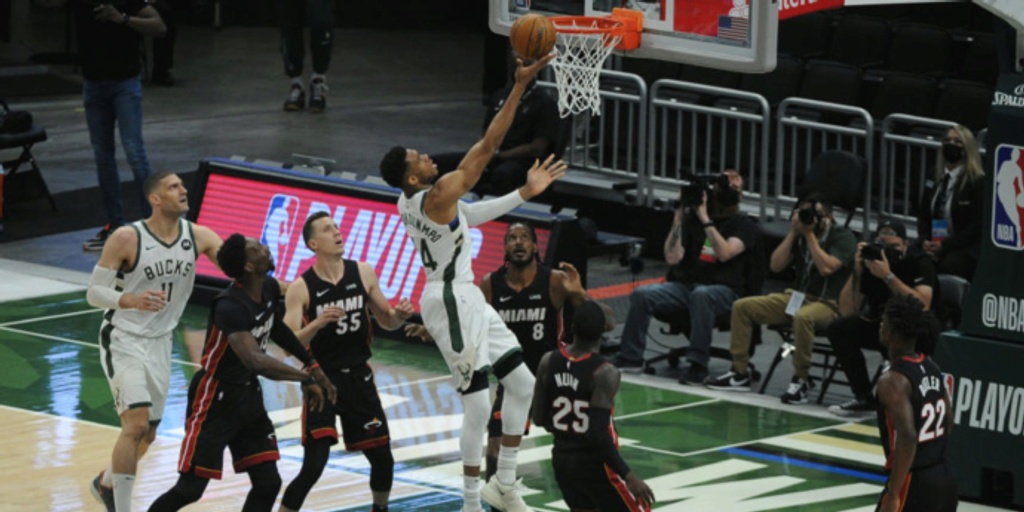 Giannis Antetokounmpo scored 31 points and Bryn Forbes led Milwaukee’s scorching start from 3-point range as the Bucks trounced the Miami Heat 132-98 on Monday night to extend their lead in this first-round playoff series.

Milwaukee shot 22 of 53 from 3-point range – including 15 of 29 in the first half – and never trailed while leading by as many as 36 points. The Bucks' 22 3-pointers were their highest total ever in a playoff game.

Forbes scored 22 points and went 6 of 9 on 3-point attempts.

The Bucks own a 2-0 lead in the best-of-7 series as they attempt to oust the team that beat them 4-1 in the second round last year. Game 3 takes place Thursday in Miami.

Milwaukee’s two victories in this season couldn’t have looked much more different.

The Bucks needed Khris Middleton’s tiebreaking jumper with 0.5 seconds left in overtime to pull out a 109-107 victory in Game 1, which neither team ever led by more than eight points. Milwaukee essentially put away Game 2 in the first quarter as its 3-point attack went from fizzling to sizzling.

Milwaukee had shot 5 of 31 from behind the arc and made its fewest 3-pointers of the season Saturday. The Bucks were 10 of 15 on 3-point attempts in the first quarter alone Monday.

The Bucks led 46-20 at the end of the first quarter and 78-51 at halftime as they posted the highest first-half point total in their playoff history.

The hottest shooter on the floor was Forbes, who signed with Milwaukee in November after spending four seasons with the San Antonio Spurs. Forbes came off the bench to score 14 points in the first quarter while shooting 5 of 6 overall and 4 of 5 on 3-pointers.

Middleton finished with 17 points and Pat Connaughton had 15 while shooting 5 of 9 from beyond the arc. Antetokounmpo had 13 rebounds and six assists to go along with his 31 points.

Jrue Holiday's 15 assists were one off the Bucks playoff record that is shared by Paul Pressey and Oscar Robertson. Holiday also had 11 points and seven rebounds.

Miami's Dewayne Dedmon had 19 points and nine rebounds to lead the Heat in both categories. Goran Dragic had 18 points and Bam Adebayo added 16.

Heat: Trevor Ariza and Kendrick Nunn picked up flagrant-one fouls on separate plays in the third quarter. Goran Dragic received a dead-ball technical foul later in the period. Ariza’s came after an unsuccessful attempt to prevent an Antetokounmpo layup. Both players fell to the floor on the play, and Ariza appeared put his hands Antetokounmpo’s chest and waist area while getting up. Nunn’s foul was against Middleton.

Bucks: Milwaukee's 10 3-pointers in the opening period tied a playoff record for 3-pointers in a quarter. The Cleveland Cavaliers made 10 3-pointers in the second quarter of a 123-98 victory over the Atlanta Hawks on May 4, 2016. ... Milwaukee outrebounded the Heat 61-36. The Bucks had a 64-51 edge on the glass in Game 1. ... As well as the Bucks shot from beyond the arc Monday, this didn’t approach their best 3-point performance against the Heat this season. They made an NBA-record 29 3-pointers in a 144-97 victory at Miami on Dec. 29.