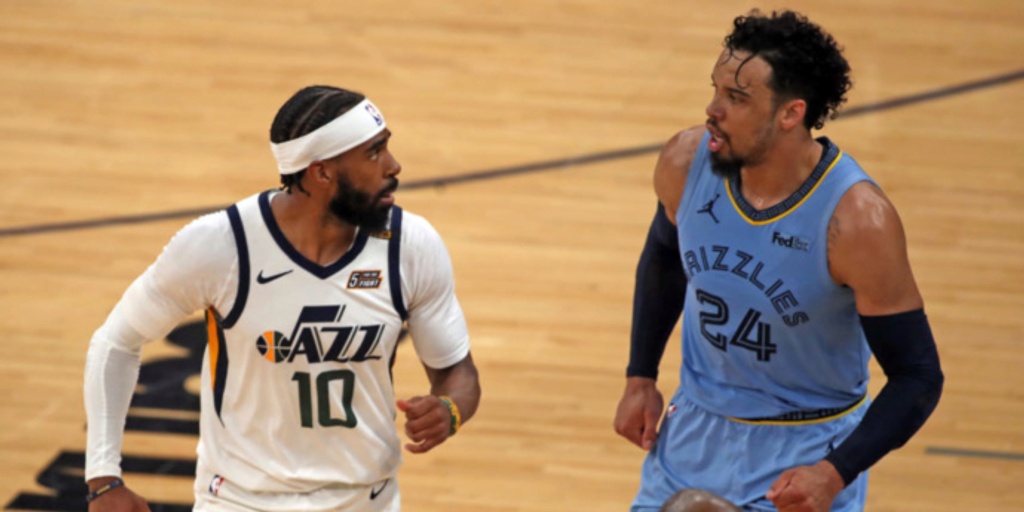 Now they're trying hard not to boo the guard they loved for so long.

“Sometimes you live long enough to become the villain, and I’ve become that for I guess the Memphis Grizzlies now," Conley said.

Conley is trying to lead the top-seeded Utah Jazz to the NBA Finals, which eluded him during a seven-year playoff run in Memphis. Conley is taking on his replacement in Memphis in Ja Morant, who has the Grizzlies back in the playoffs for the first time in four years.

Morant is leading the youngest roster in this postseason with 33.7 points per game, trailing only Luka Doncic and Kawhi Leonard. Conley, who scored 27 in a 121-111 win that gave the Jazz a 2-1 lead, says it feels he's come full circle in a way he never expected.

“It’s amazing to be playing against a guy like Ja first off, just seeing a guy that is so talented, a young superstar in the league wearing the jersey that I’m so used to wearing, getting the cheers and the crowds that I’m so used to hearing is surreal,” Conley said.

“And I’ve seen it at an even higher level now,” Mitchell said.

Utah can take a 3-1 lead Monday night in Game 4 on a light night in the NBA, with Philadelphia trying to finish off a sweep in Washington the only other game. The Jazz want to put the hungry Grizzlies away as quickly as possible.

“This team isn’t a team you want to play around with at all," Conley said. “We’ve tried a bunch of different things, and they just keep attacking and keep keep finding ways to give themselves a chances to win.”

The 76ers are on the verge of their first sweep in 36 years. Their 132-103 rout in Game 3 marked the first time they've won the first three games in a series since sweeping Milwaukee in the 1985 Eastern Conference semifinals.

Coach Scott Brooks said the Wizards' goal is getting this series back to Philly.

“We fought through a lot. We overcame a lot," Brooks said Sunday. “This is another opportunity for us to do that.”

— NEED TO KNOW: Joel Embiid is putting on a show, reminding anyone who didn't know why he is a finalist for NBA MVP. He is coming off his best playoff game yet with 36 points, making 14 of 18 shots despite sitting out the entire fourth quarter.

— KEEP AN EYE ON: Ben Simmons and Tobias Harris. Embiid attracts so much attention that Simmons was an assist away from a double-double while Harris had one with 20 points and 13 rebounds.

— INJURY WATCH: Russell Westbrook. A game-time decision for Game 3 after hurting his right ankle in Game 2, he turned in his 11th career postseason triple-double to tie Jason Kidd for third in NBA history. Brooks talked Sunday with Westbrook, who is listed as questionable.

“He's as tough as they come,” Brooks said. “He knows what's at stake. He wants to keep playing and competing and fighting for his teammates. But he says he feels not bad."

— PRESSURE IS ON: The Wizards. They finished the season on a 17-6 run to get into the play-in round but are 1-4 since then. The 76ers are exposing both their lack of playoff experience and top-level talent beyond Westbrook and Bradley Beal, who finished this season and last as the No. 2 scorer in the NBA.

— NEED TO KNOW: The team that led the NBA making 16.7 3s per game is back to form after an ugly shooting performance in Game 1. The Jazz are back on that average this postseason after making 19 3-pointers in Game 3, shooting with such ease it felt like they hit a 3 for every bucket Memphis got in the paint.

— KEEP AN EYE ON: Morant has scored 101 points through his first three playoff games. He's now the fourth player in NBA history and the first since 1970 to score 100 or more points in his first three games, joining Wilt Chamberlain, George Mikan and Kareem Abdul-Jabbar.

— INJURY WATCH: Mitchell looks healthy and is playing better with each game back from the sprained right ankle that kept him out of 17 games, including Game 1 of this series. He played nearly 30 minutes Saturday night after being limited to 26 in Game 2.

— PRESSURE IS ON: The Grizzlies must win Monday night to avoid heading back to Utah on the brink of elimination.