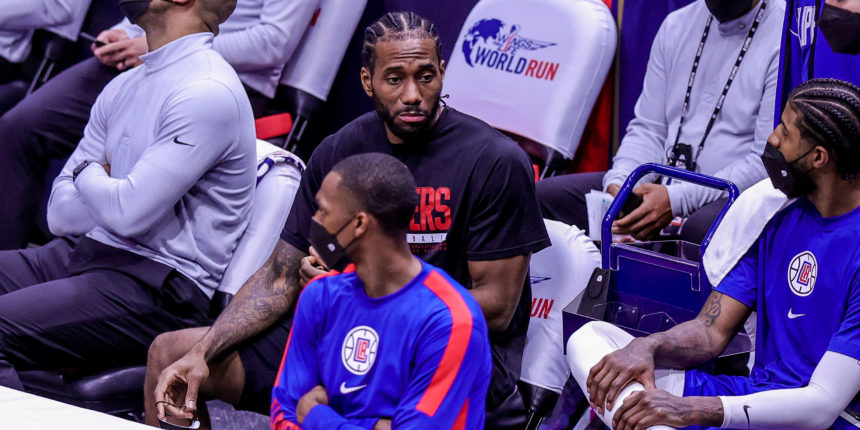 Clippers look to avoid another playoff meltdown vs. Mavericks

The Dallas Mavericks are poised to add another chapter to the Los Angeles Clippers' playoff misery.

With everyone in the NBA focused on fan misconduct, the Clippers find themselves in a familiar position after losing the first two games at Staples Center.

Now, as the best-of-seven series shifts to the Lone Star State, the Mavericks can deliver a potentially decisive blow in Game 3 on Friday night.

No team has overcome a 3-0 deficit in the NBA playoffs. The Clippers are hardly a candidate to break that trend, facing a first-round elimination for the fourth time in six years.

"We’re nowhere yet," Dallas' Kristaps Porzingis said. “That’s a good step for where we want to go. But there’s still more to do. We have to keep our heads in the right place and on to the next one.”

Also Friday, the Atlanta Hawks get their first home playoff game since 2017 when they take on the Knicks after splitting the first two contests in New York, while the Brooklyn Nets look to go up 3-0 on the Celtics when the Eastern Conference series shifts to Boston.

The Hawks-Knicks series was marred by an ugly incident in Game 2 when a fan spit on Atlanta star Trae Young while he was preparing to inbound the basketball in the fourth quarter of New York’s 101-92 win.

““It's unacceptable. I don't even understand it,” Atlanta's John Collins said. “You come to arena to watch a basketball game, where does it come into your mind to spit at someone? It's so disrespectful.”

That wasn't the only misbehavior in the stands on Wednesday.

A fan dumped popcorn on Washington Wizards star Russell Westbrook as he was leaving a game at Philadelphia with an ankle injury. In Utah, three fans were tossed from a game against Memphis.

The Jazz did not reveal specifics of the incident, but Grizzlies guard Ja Morant — who had family at the game — said the three people “just went too far.”

The Knicks, 76ers and Jazz issued apologies and banned those involved, while players across the league again raised concerns about their safety in a sport where fans sit right next to the court.

The issue is heightened even more as the coronavirus pandemic eases across the United States, prompting teams to open their arenas to the largest crowds of the season.

The NBA said that rules surrounding fan behavior will be “vigorously enforced” through the rest of the playoffs.

“The return of more NBA fans to our arenas has brought great excitement and energy to the start of the playoffs, but it is critical that we all show respect for players, officials and our fellow fans,” the league said.

The Clippers will be dealing with a large, boisterous crowd in Dallas, where more than 15,000 fans are expected for Game 3.

That doesn't bode well for Los Angeles, which parted with coach Doc Rivers after an upset loss to Denver in the second round of last years playoffs. With Tyronn Lue now on the sidelines, nothing much has changed for the Clippers.

The franchise, which started as the Boston Braves in 1970 and also had a stint in San Diego, has never advanced past the second round of the playoffs.

— NEED TO KNOW: The Knicks rallied from a double-digit deficit in Game 2 thanks to a dominating performance on the boards. They outrebounded the Hawks 54-41, leading to a big edge in second-change points.

— KEEP AN EYE ON: Knicks G Derrick Rose. The former MVP is averaging 21.5 points a game off the New York bench.

— INJURY WATCH: Both teams are healthy beyond long-term injuries.

— PRESSURE IS ON: Collins. The Hawks forward was held scoreless in Game 2, playing less than 15 minutes because of nagging foul trouble. He must do a better job coping with New York's physical play and gripes about the officiating.

— NEED TO KNOW: Nets G Kyrie Irving will be playing in front of fans in Boston for the first time since leaving as a free agent in 2019 following two seasons. Alluding to the troubles in New York and Philadelphia, Irving said, “I’m just looking forward to competing with my teammates and hopefully we can just keep it strictly basketball, there’s no belligerence or any racism going on, subtle racism and people yelling (stuff) from the crowd."

— KEEP AN EYE ON: Nets F Joe Harris. While Brooklyn's Big Three of Irving, Kevin Durant and James Harden gets most of the attention, Harris is the league's most accurate 3-point shooter. He tied a franchise record with seven 3s in Game 2.

— INJURY WATCH: Nets F Jeff Green will have to sit out at least 10 days with a bruised left foot.

— PRESSURE IS ON: Celtics F Jayson Tatum has missed 15 of his last 18 shots from the field and managed only nine points in Game 2 before a poke to the eye forced him to the sideline. His eye is doing much better — and Boston needs him to play much better to have any chance.

— NEED TO KNOW: The Clippers' franchise has never won a playoff series after losing the first two games.

— KEEP AN EYE ON: Mavericks G Luka Doncic, as always. The All-Star averaged 35 points over the first two games.

— INJURY WATCH: Mavericks F Maxi Kleber has been bothered for weeks by sore right Achilles tendon. He managed to go 34 minutes in Game 2, finishing with 13 points and four rebounds.

— PRESSURE IS ON: The Clippers to come out with a much greater sense of urgency. Dallas got off to a strong start in each of the first two games, putting Los Angeles on its heels.