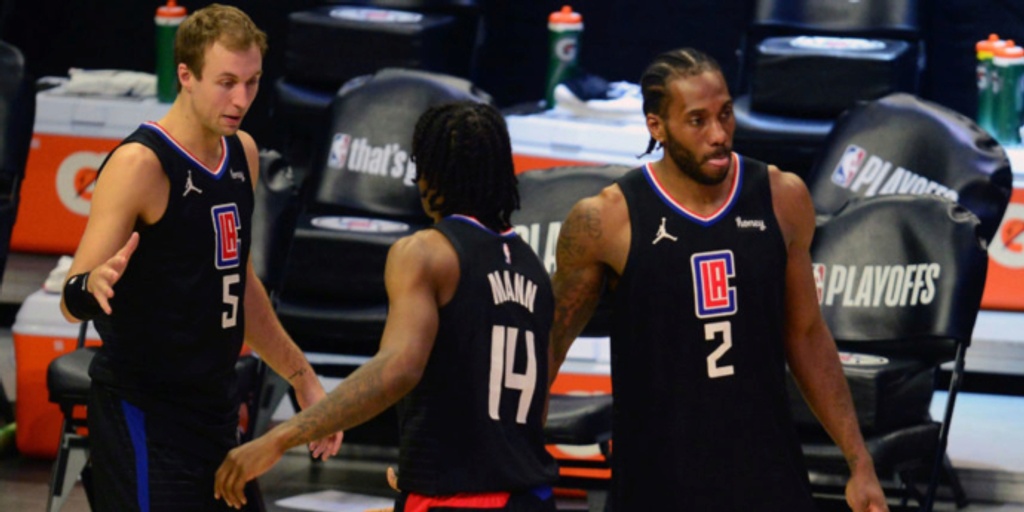 Kawhi Leonard listed as out for Friday's Game 6 vs. Utah

Clippers forward Kawhi Leonard is officially out Friday night for Game 6 of the Western Conference semifinals against the Utah Jazz, but coach Tyronn Lue did not have any update on if it will be longer.

Leonard sprained his right knee Monday night in a Game 4 win. He traveled with the Clippers to Salt Lake City, Lue said, then returned to Los Angeles for further testing. A sprain, by definition, is a ligament injury, but the Clippers have not said which of the four knee ligaments he injured.

Despite missing Leonard, LA took a 3-2 series lead on Wednesday night with a 119-111 victory behind 37 points from Paul George. The Clippers are 12-9 without their All-Star forward this season, including 1-0 in the playoffs.

Leonard — a two-time NBA Finals MVP — is averaging 30.4 points in the playoffs.

The Clippers will be looking to close out the series and advance to the conference finals for the first time in the franchise’s 51-year history with a win. The Jazz need a victory on Friday to send it back to Salt Lake City for Game 7 on Sunday. The winner faces the Phoenix Suns.

LA was up 3-1 in last year’s series against the Denver Nuggets but were eliminated with three straight losses. Lue said the focus remains on winning Friday night and not dwelling on history.

“I know, like you said, the first time ever getting to the Western Conference finals, of course guys are thinking about that, but I’m focused and my job is just to make sure we’re focused on tomorrow night and that’s it and try to take care of business,” Lue said. “We know it’s going to be a tough game. Their backs are against the wall now, so they’re going to come out and throw punches and do everything they can to try to win that game.”

Friday’s game will also be the first time in 15 months the Clippers can play in front of full capacity at Staples Center after California eased some of its COVID-19 safety measures on Tuesday. LA was allowed to only play to half capacity during its first six home playoff games.