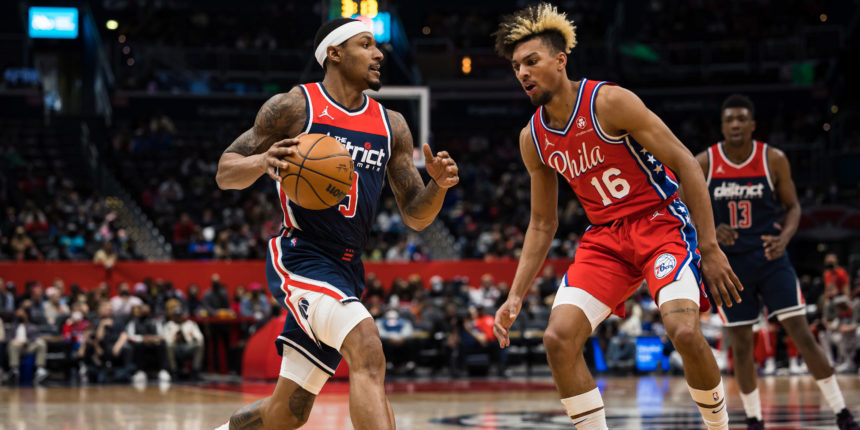 Kyle Kuzma had 15 points and 16 rebounds, and Bradley Beal added 13 points in his return from a three-game absence to lift the Washington Wizards to a 117-98 victory over Joel Embiid and the Philadelphia 76ers on Monday.

Beal had been out since entering the protocols himself, but he returned and scored 11 points in the first quarter. Washington went on an early 11-0 run and never looked back.

Embiid scored 32 points for the 76ers, but he was on the receiving end of the game's biggest highlight when Kuzma dunked over him in the second quarter. Philadelphia lost for only the second time in its last 11 games.

After the Wizards led 61-55 at halftime, Kentavious Caldwell-Pope scored seven quick points in the third quarter, including a 3-pointer that put Washington up 72-59.

It was a six-point lead early in the fourth before the Wizards went on a 22-5 run to put the game away.

Washington had seven players in double figures. Montrezl Harrel led the way with 18 points, and Thomas Bryant had 15.

Kuzma dunked over Embiid with one hand to give the Wizards a 58-47 lead. Moments later, he blocked a shot attempt by Embiid at the other end.

76ers: Andre Drummond and coach Doc Rivers were both called for technical fouls. ... Philadelphia was without Danny Green (right hip) for a third straight game, and Matisse Thybulle (right shoulder) was out for a second in a row. ... Tyrese Maxey (18 points) was the only player besides Embiid in double figures for the 76ers.

Wizards: Bryant and Harrell were called for technicals. ... Caldwell-Pope scored 14 points, and Corey Kispert and Rui Hachimura contributed 11 each.