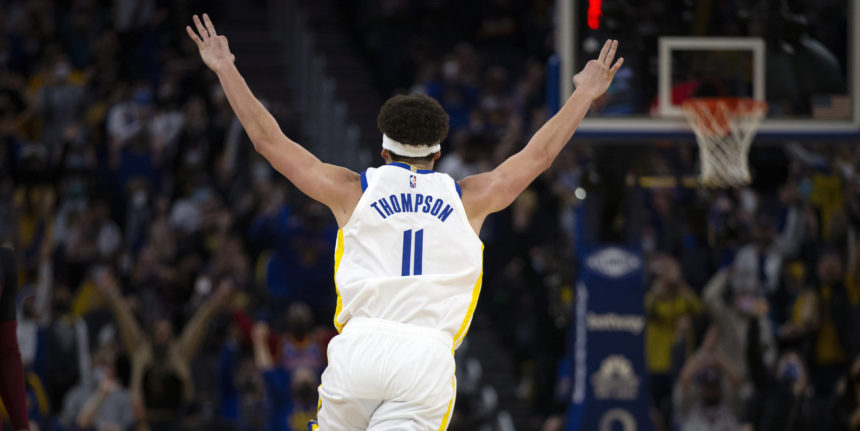 Thompson was 7 of 18 from the field and 3 of 8 from 3-point range. He added three rebounds, an assist and a steal in 20 minutes, walking off the court to a thunderous ovation followed by chants of “Klay! Klay!” from the Chase Center crowd.

Stephen Curry had 29 points, five rebounds and five assists, and Jordan Poole added 14 points for Golden State. The Warriors snapped a two-game losing streak to tie Phoenix for the NBA lead at 30-9.

Lamar Stevens had 17 points and four rebounds for Cleveland.

Thompson missed 941 days and hadn’t played since tearing the ACL in his left knee in Game 6 of the 2019 NBA Finals against Toronto. While rehabbing from surgery for that injury, he tore his right Achilles tendon scrimmaging on his own in November 2020.

The five-time All-Star finally made his much-anticipated return, and reached two career milestones — 12,000 points and 1,800 3-pointers.

“It was just amazing having him out there,” Curry said on the television broadcast.

Thompson got off to a slow start but showed plenty of the flash that made him a vital component on Golden State’s three championship teams from 2015-18.

At one point Thompson brought the crowd to its feet when he drove around a defender near the 3-point line and scored on a jarring one-handed dunk. Thompson snarled and pounded his chest as he walked back toward midcourt. Moments later he made his first 3-pointer to go over 12,000 points and put the Warriors up 49-41.

After spending time on a stationary bicycle, Thompson started the third quarter and made three consecutive shots, including his 1,800th.

Warriors: Golden State has won 10 straight against Cleveland. … Juan Tosco-Anderson had two points, four rebounds and three assists after being questionable before the game because of left ankle soreness.

Cavaliers: At Sacramento on Monday night.

Warriors: At Memphis on Tuesday night.

Russell Westbrook has unfairly been made the Lakers' scapegoat
7h

Giannis, suprisingly slept-on Bucks are capable of much more
yesterday