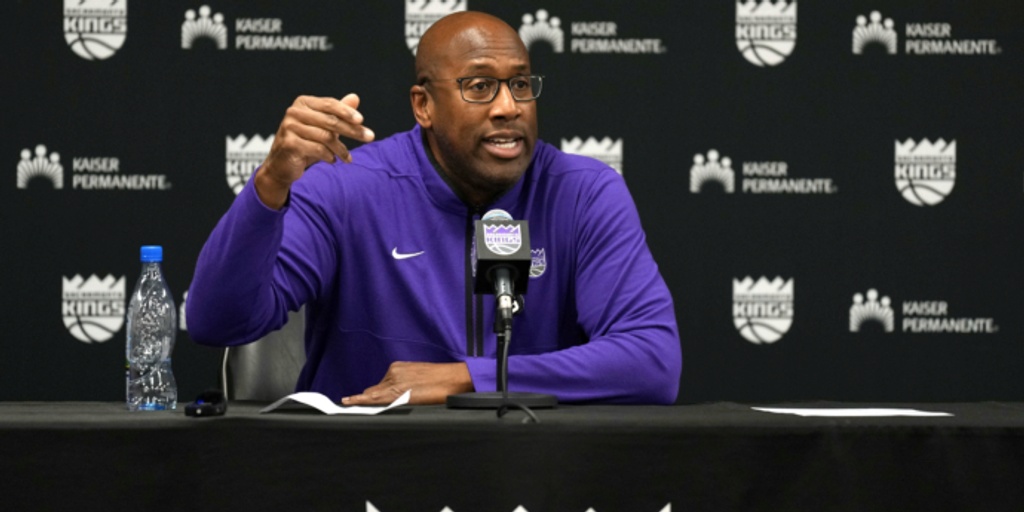 After a record 16-year run of futility, the Sacramento Kings are counting on Mike Brown to be the coach that will end the longest playoff drought in NBA history.

Brown takes over a downtrodden franchise that hasn't been to the postseason since 2006 but enters this season hoping that a coach with a history of defensive success is the ingredient needed to change the fortunes.

“The connectivity of the group is fantastic,” Brown said. "There’s a great spirit and energy that you feel out there from our guys.”

Whether that translates into enough wins in the competitive Western Conference is the big question.

But entering a season with optimism and ending it that way are very different for the Kings.

“We have to prove we are good enough to make it into that dance," general manager Monte McNair said. "We are going to need guys across the roster to step up, but we think we have the pieces here.”

Brown is the 12th coach in Sacramento since Rick Adelman led the Kings to their eighth straight playoff berth in his final season there in 2006.

Since moving to California for the 1985-86 season, the Kings had a winning record all eight seasons under Adelman and a losing record every other year.

Brown comes with a proven pedigree during his seven-plus seasons as a head coach with a .616 win percentage for Cleveland and the Lakers. He went to the playoffs six times, including leading the Cavaliers to the Finals in 2007.

Brown's teams have typically been among the better defensive teams in the league and he will try to fix a team that finished in the bottom five in the league in defensive efficiency the past two seasons.

“He’s going to emphasize that every day,” guard Davion Mitchell said. "The culture he came from when they were really good defensively, he’s going to try and bring that to our team.”

The big move Sacramento made last season was to trade promising guard Tyrese Halliburton in a package to Indiana for Sabonis. The Kings hope Sabonis and Fox can provide a strong 1-2 punch with their ability to run the pick and roll. They showed flashes in their 13 games together down the stretch last season.

The Kings used the fourth overall pick on Murray from Iowa and the early returns have been positive. He had a strong performance in the Summer League and has impressed his new teammates in training camp.

“He’s a quiet guy but you can see how confident he is in his game," Mitchell said. "He’s dynamic. He can do everything on the floor, shoot the ball, play without the ball.”

The big move the Kings made after the draft was a trade with Atlanta for Kevin Huerter, who provides a dependable outside shooter to pair with Fox in the backcourt. Sacramento also signed another shooter for the bench, inking Malik Monk in free agency.

The Kings then brought in several other players with connections to Brown to fill out the bench, including Kent Bazemore, Matthew Dellavedova, Quinn Cook, Chima Moneke, and KZ Okpala.

The Kings have a challenging early schedule with three games against the defending champion Warriors, a visit to runner-up Boston, two games against Miami, two versus Memphis, and a game against Phoenix before the end of November. There's also a six-game road trip in December, but if Sacramento survives all that, things should be a little easier afterward.