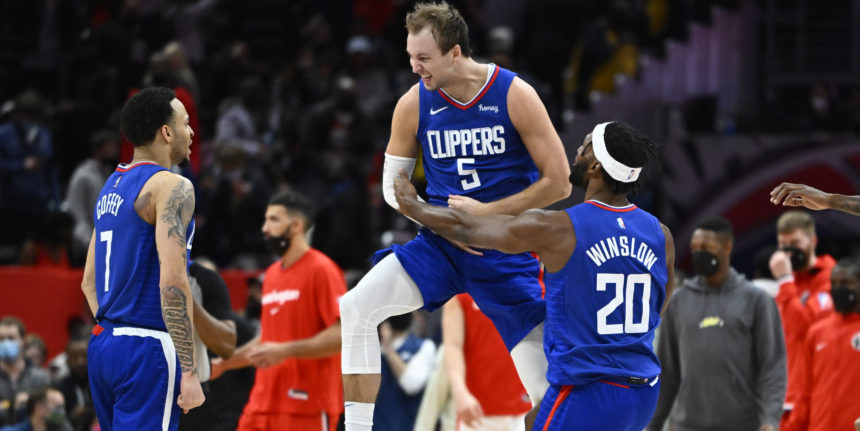 Kennard hit a 32-footer out of a timeout and then, after Washington committed a 5-second violation, sank another 3 running to his right while absorbing a foul from Bradley Beal. He finished with 25 points.

Amir Coffey scored a career-high 29 points for the depleted Clippers, who evened their record to 2-2 at the midpoint of a season-long eight game trip.

Terance Mann and Isaiah Hartenstein each had 16 points for Los Angeles, which scored 80 points after halftime to improve to 7-10 since losing seven-time All-Star guard Paul George to a right elbow injury last month.

Kyle Kuzma had 19 points and 12 rebounds, and Beal added 10 of his 23 points in the fourth quarter of Washington's fourth consecutive defeat.

The Wizards opened the game on a 15-2 run and led by 35 in the second quarter before giving it all back after halftime to complete an eight-game homestand with a 3-5 record. LA outscored Washington 40-27 in the third quarter and 40-22 in the fourth.

Washington led by nine at the end of the first quarter and held the Clippers to 13 points on 5-of-20 shooting in the second.

Los Angeles gradually cut into the lead in the third, got it to single digits with a 15-1 run that stretched into the fourth, got to within two inside the final three minutes, and then closed the game on an 11-2 run.

The Wizards contributed to the cause with seven fourth-quarter turnovers, including five inside the final six minutes.

On the last, Washington failed to inbound the ball in time with 8.2 seconds to play, setting up Kennard's heroics.

Clippers: Their previous largest deficit of the season was 28 points in a 113-89 loss at New Orleans on Jan. 13. ... Improved to 2-6 in the first leg of back-to-back games. ... F Marcus Morris sat out due to personal reasons. ... Kawhi Leonard has not played all season while recovering from a torn ACL.

Wizards: Held the Clippers to 36 first-half points, an opponent's season low. ... Kuzma's double-double was his 19th of the season and eighth in January.

Clippers: Continue their trip at Orlando on Wednesday night.

Wizards: Begin a three-game trip at Memphis on Saturday night.