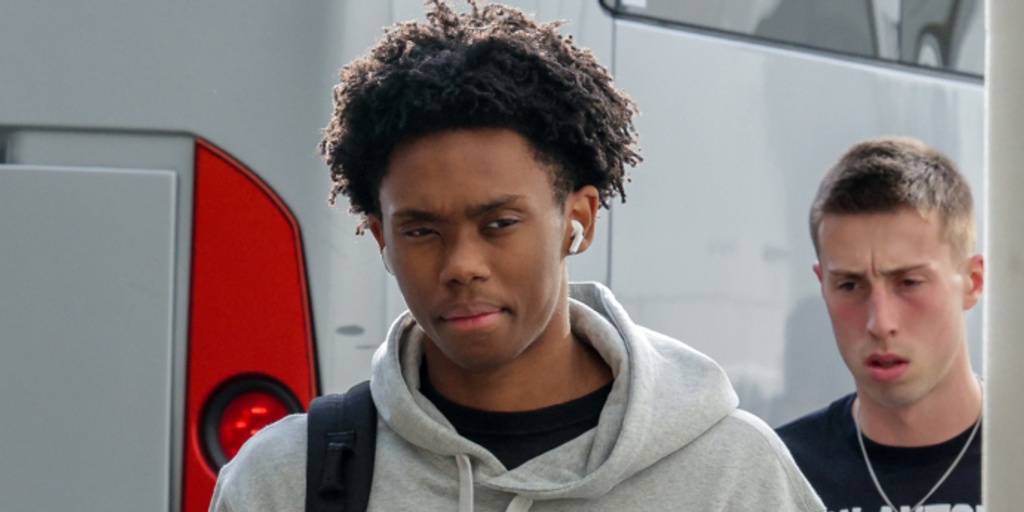 HOUSTON (AP) — A psychologist who worked for the San Antonio Spurs has sued the team and former player Josh Primo, claiming he exposed himself to her multiple times during private sessions.

Hillary Cauthen worked as a performance psychologist for the team. A lawsuit filed Thursday in Bexar County alleges that the 19-year-old Primo exposed his genitals to her nine times “despite her numerous complaints about Primo’s improper sexual conduct to the organization’s leadership.”

Cauthen spoke publicly about the allegations against Primo for the first time Thursday in an emotional press conference where she wept openly throughout.

“I am many things, but I’m not alone in the fight to do the right thing,” she said. “The right thing is to say: ‘No, this is not OK.’ To hold people accountable. To make systemic change. To protect those that suffer in silence.”

Primo was waived by the Spurs last Friday, just four games into his second NBA season.

Primo, through his attorney, denied any wrongdoing and lashed out at Cauthen’s claims, saying she is “playing to ugly stereotypes and racially charged fears for her own financial benefit,” and calling it an act of betrayal against a client.

“Dr. Cauthen’s allegations are either a complete fabrication, a gross embellishment or utter fantasy,” the attorney, William J. Briggs II, said. “Josh Primo never intentionally exposed himself to her or anyone else and was not even aware that his private parts were visible outside of his workout shorts.”

“While we would like to share more information, we will allow the legal process to play out," Buford said, adding that the Spurs remain “committed to upholding the highest standards and will continue to live by our values and culture.”

“There will be a criminal complaint filed for multiple counts of indecent exposure against Mr. Primo,” Buzbee said. “And we expect the authorities to prosecute.”

The lawsuit alleges that Primo first exposed himself to Cauthen in December and that she reported the behavior at that time. According to the lawsuit, “exposures happened on numerous occasions and grew progressively more extreme.”

Cauthen requested a meeting with Spurs general manager Brian Wright in January. She said she finally met with him on March 21, after several postponements, and laid out what she alleges Primo had done in their sessions.

She said she had more meetings with Wright in the following months and met multiple times with lawyers from the Spurs organization. In July she wasn’t invited to accompany the team to the NBA Summer League in Las Vegas and, according to the lawsuit, the Spurs told her that they felt “she was unable to do her job in a professional manner due to what was now a lack of trust between her and the team.”

Cauthen had worked for the Spurs since April 2021. Her contract came up for renewal at the end of August and she was not retained.

“I was honored and grateful to have an opportunity to be embedded in the team,” she said. “It’s very rare to have someone that has the chance to build something within an organization, and I chose to build something with people that I trusted. And I feel like, more importantly, I lost the impact to help others (and) I lost my job.”

Buzbee said he hasn’t been contacted by any other women about Primo but that he expects he will in the coming days amid reports that Primo has allegedly exposed himself to others.

Cauthen was asked how she felt when Primo was released months after she first reported the allegations to the team.

The Spurs took Primo with the 12th overall pick in the 2021 NBA draft after one season at Alabama. Primo averaged 5.8 points, 2.3 rebounds and 1.6 assists in his rookie season with the Spurs, and 7.0 points, 4.5 assists and 3.3 rebounds in four games with the Spurs this season.

The team recently picked up his third-year option, a largely procedural move that locked in a $4.3 million salary for next season and showed that he was expected to remain in the Spurs’ plans. He was making $4.1 million this season.

Had he been claimed by another team before Monday, that team would have been responsible for the $8.4 million Primo is owed. He cleared waivers Monday and is a free agent.

Buzbee also represented 24 women who sued Cleveland Browns quarterback Deshaun Watson for sexual assault or harassment when he was with the Houston Texans. Watson is serving an 11-game suspension from the NFL.