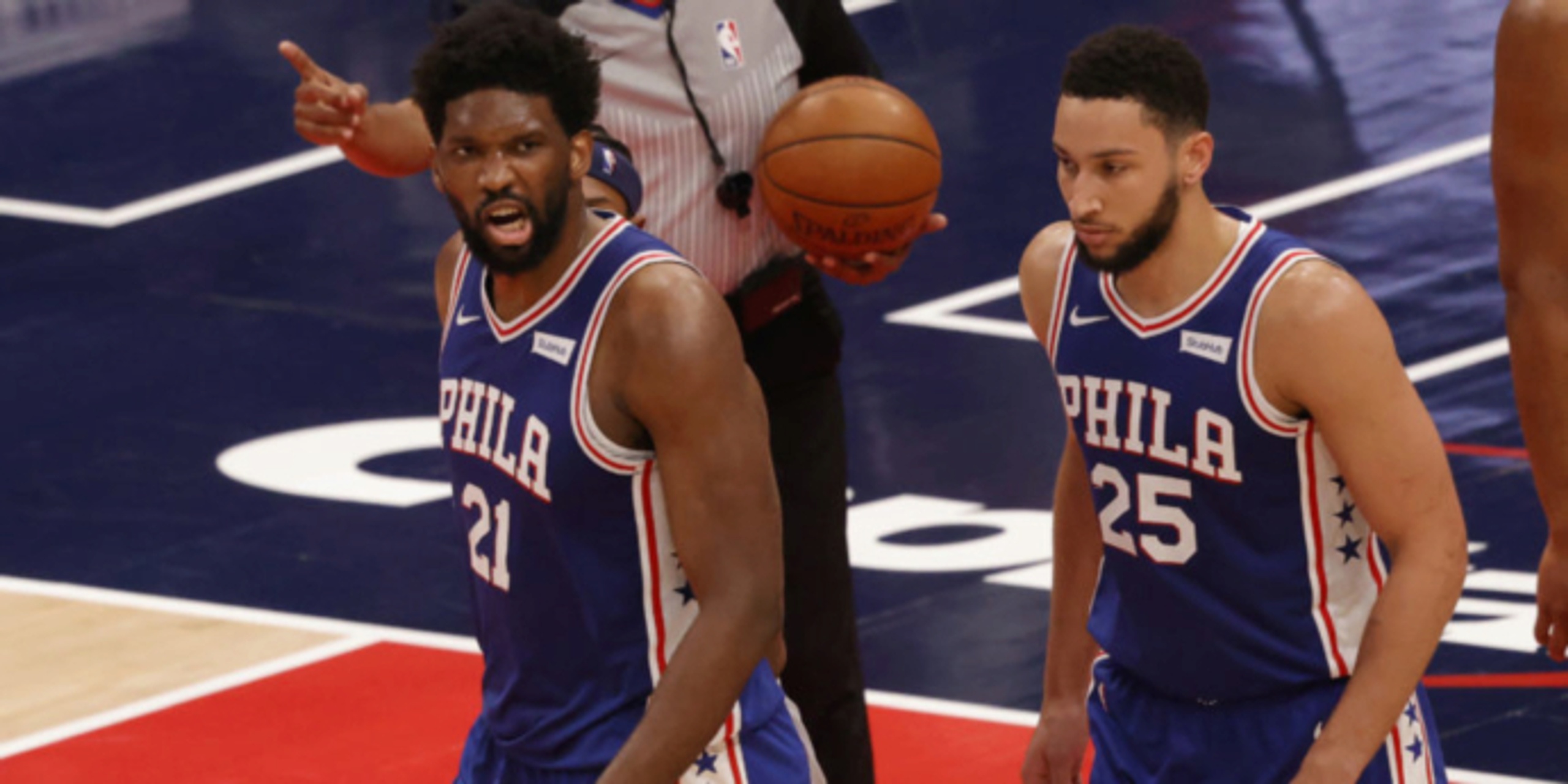 WASHINGTON (AP) — The “M-V-P!” chants came not from the home crowd saluting Bradley Beal but rival 76ers fans for Joel Embiid, who put on another valuable performance to push the Wizards to the brink of elimination.

Embiid set a career playoff high with 36 points and Philadelphia routed Washington 132-103 on Saturday night to take a 3-0 lead in the first-round series.

Embiid scored 25 points in the first half, and finished 14 of 18 from the floor in 28 minutes before resting the entire fourth quarter. The top-seeded 76ers will go for the sweep in Game 4 on Monday.

His signature moment of this victory came seconds after he missed a monster dunk, going back down the floor and connecting on his next attempt while drawing a foul. Embiid then cupped his hands to his ears to encourage the crowd of over 10,000, which was the largest to attend an indoor sporting event in the nation's capital in 14 months.

The reaction was mixed then and throughout as the 76ers kept the Wizards at arm's length before pulling away. Beyond seven minutes in, it was never closer than four points, and Philadelphia led by as many as 31 on the way to the franchise's first 3-0 series lead since 1985.

The 76ers took advantage of the Wizards' biggest stars nursing injuries, though they still produced. Russell Westbrook had 26 points, 12 rebounds and 10 assists for the triple-double after being a game-time decision with a sprained right ankle, and Beal had 25 as he continues to get back to full health from a strained left hamstring.

Ben Simmons scored 14 and had nine assists, but Philadelphia was far from a two-man show. Tobias Harris had 20 points, 13 rebounds and five assists, and Danny Green made five 3-pointers to finish with 15.

The Wizards planned to get Westbrook treatment in the locker room each time he checked out of the game. Problem was, they couldn't afford to play without him, even as the ankle was bothering him.

Westbrook played almost 21 minutes in the first half and over 34 total before heading to the locker room late in the blowout. It was no surprise he played through pain given Washington's hole in the series, and Philadelphia wasn't expecting Westbrook to sit out.

“We’ll do our thing, coach Doc Rivers said. ”That should not change how we play."

The game was the first playoff contest to be played at a major sports arena in the U.S. with an active sportsbook. The William Hill venue, which was accessible for fans from the 200 level, opened Wednesday.

76ers: All five starters scored in double figures. ... Joined the 2020 Utah Jazz, 2019 Golden State Warriors, 1987 Los Angeles Lakers and 1986 Boston Celtics in scoring 120-plus points in each of their first three postseason games. The Lakers and Celtics went on to win the NBA title. ... Set a franchise record for points through three quarters with 109. ... Green passed Paul Pierce to move into 12th on the playoff career 3-pointers list.

Wizards: Westbrook tied Jason Kidd for third in NBA history with his 11th career postseason triple-double. ... Davis Bertans started in place of Raul Neto with coach Scott Brooks looking for more size. ... Georgetown coach and former New York Knicks star Patrick Ewing was in attendance and got a nice ovation from the crowd when shown on video screens.