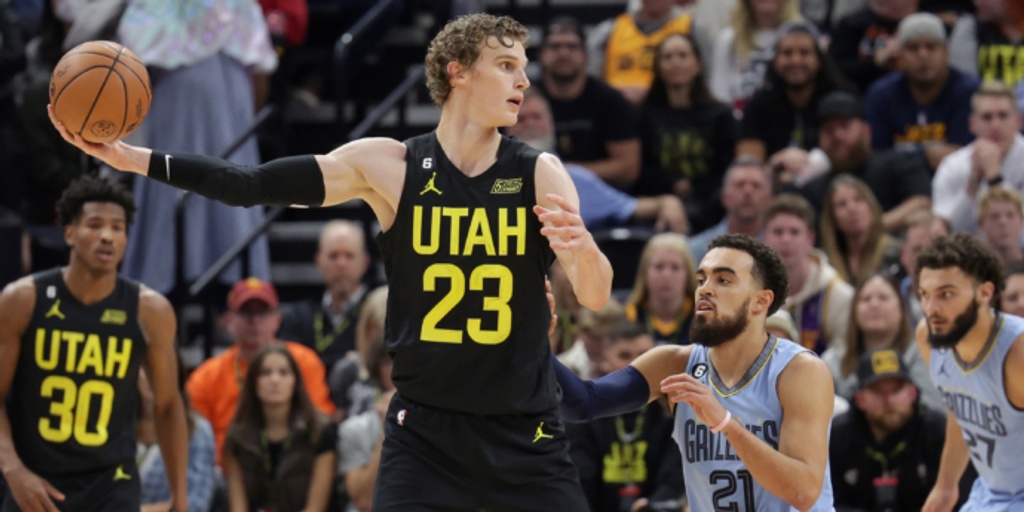 Lauri Markkanen had 31 points and 10 rebounds, and the Jazz dominated on both ends of the court Monday night in a 121-105 victory over the Memphis Grizzlies.

Utah repeatedly contested shots, crashed the boards and forced turnovers. On offense, the Jazz were equally relentless in knocking down one outside jumper after another.

“Nobody is backing down or afraid of anything,” veteran guard Mike Conley said. “That’s who we are. We are that team and it’s fun to be around that — guys who are scrappy that don’t care about getting elbowed and don’t care about fouling too many times.”

Markkanen made a season-high 11 field goals while shooting 69% from the floor.

He made an equally forceful impact as a defender, contesting shots and keeping shooters uncomfortable in the paint.

“He has good feet, and he knows how to use his size and length. He’s a legit 7-footer,” Jazz coach Will Hardy said. “His size, coupled with his ability to move, makes him a good defender.”

Malik Beasley added a season-high 18 points off the bench for the Jazz. Conley and Collin Sexton chipped in 15 apiece. Utah made 19 3-pointers to earn its second win over Memphis in three days.

Ja Morant had 37 points to pace the Grizzlies. Dillon Brooks added 19 points and Tyus Jones chipped in 12. Memphis shot 6 of 26 from 3-point range.

“Everything was on us,” Morant said. “We weren’t communicating, rotating, and we were just giving them easy looks.”

Morant went 5 for 5 from the floor in the first quarter and helped Memphis grab a 26-23 lead. He had 21 points by halftime.

Things unraveled for the Grizzlies in the second period amid a flurry of turnovers and a long shooting drought. Utah held Memphis to a single basket in 6 1/2 minutes. The Jazz also forced eight turnovers during the quarter and scored 10 points off those takeaways.

That opened the door for Utah to take control before halftime. The Jazz ripped off a 24-5 run, punctuated by Jordan Clarkson’s four-point play, to seize a 54-38 lead.

Utah outscored the Grizzlies 38-18 in the second quarter and limited Memphis to 32% shooting from the field. The Jazz also had 38 second-quarter points in their win over the Grizzlies on Saturday night.

“We lost our spirit there in the second quarter and they took advantage,” Memphis coach Taylor Jenkins said.

Utah extended its lead to 23 by the end of the third after making seven 3-pointers in the quarter.

Utah unraveled late last season amid reports of locker room strife between former stars Rudy Gobert and Donovan Mitchell. This season, the Jazz have made a 180-degree turn with team chemistry.

Clarkson said he's having fun and enjoying this season because everyone shares a hunger to prove themselves and it has led to working hard together and communicating well on the court.

“We have a great thing going right now in terms of the vibe in the locker room,” Clarkson said.

Grizzlies: At the Portland Trail Blazers on Wednesday.