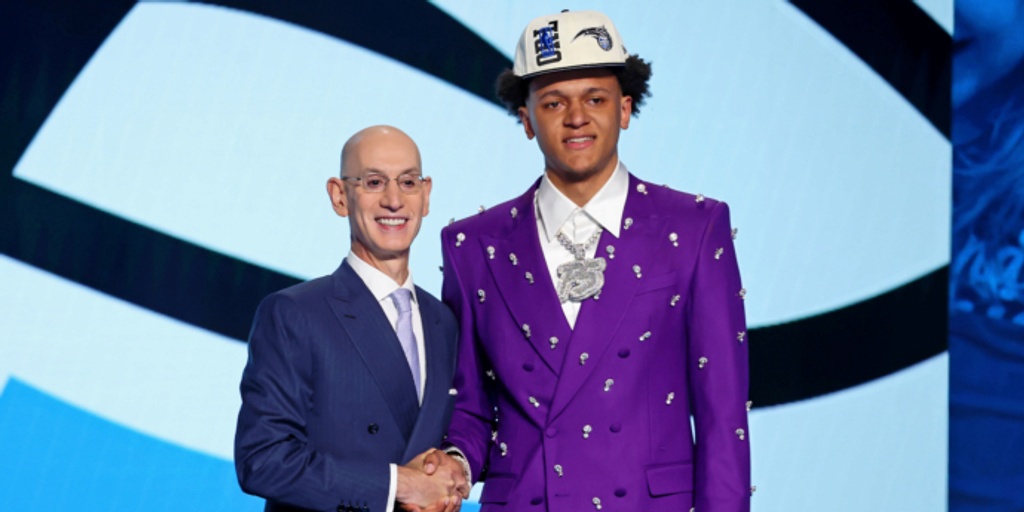 It's Banchero to Orlando: Magic grab Duke standout at No. 1

Paolo Banchero never worked out for the Orlando Magic. He didn’t have to, either.

His year at Duke provided all the information they needed.

The latest — and perhaps most important — piece to Orlando’s rebuild is Banchero, the 6-foot-10 forward who went No. 1 overall in Thursday’s NBA draft. He met with the Magic several times in recent weeks, taking part in everything from personality profiles to get-to-know-you interviews, and what happened in those sessions only steeled Orlando’s belief that he was the best pick.

“We feel he was the best player in college basketball,” Magic President Jeff Weltman said. “And we feel that he will continue to grow every year for many years to come.”

Banchero averaged 17.2 points in his lone college season, along with 7.8 rebounds and was a third-team Associated Press All-American. There were roars from the crowd at Amway Center — Banchero’s new home court — when NBA Commissioner Adam Silver announced just past 8 p.m. that the Magic were on the clock.

It didn’t take long for the Magic to send in the official word. Banchero is heading to Orlando, with plans for his official welcome at his new home on Friday.

“A dream come true," Banchero said, when detailing what the moment that he heard his name as the No. 1 pick. “It was a really surreal moment."

Silver is a Duke grad. And as is tradition for the commissioner, he gave Banchero a handshake and warm embrace after the new No. 1 pick put on a Magic hat and took the stage for his big moment.

The whole scene was overwhelming for Banchero, and yes, he cried.

“I’d never been brought to tears by anything that was positive," he said.

Banchero joins a young core in Orlando that already includes 2017 top overall pick Markelle Fultz, a pair of top-eight picks from the 2021 draft in Franz Wagner and Jalen Suggs, and Cole Anthony — the No. 15 pick in 2020.

Orlando also has the No. 6 picks from the 2017 and 2018 draft, Jonathan Isaac and Mo Bamba. It’s possible that when next season starts Orlando could have as many as six lottery picks, nine top-16 selections and 12 first-rounders on its roster.

There's a lot of room to grow. The Magic went 22-60 this past season. Banchero's Duke team won 10 more games than the Magic did.

“I’m super excited to get out to Orlando," Banchero said. “Like, really, I’m excited about the team. I think that’s the most exciting part, to get out there with the team. I feel like we have a real talented team. A lot of guys are hungry, ready to win, and I'm the same way."

Orlando later drafted Michigan forward Caleb Houstan with the No. 32 pick, the second one of the second round. He averaged 10.1 points for the Wolverines last season.

Banchero will make about $10 million next season, the start of his four-year rookie deal, plus whatever he lures in off-court earnings. Given that he's a No. 1 pick, out of Duke, it's likely he'll have plenty of appeal in the endorsement world.

Choosing Banchero was a mild surprise, after weeks of speculation that Auburn's Jabari Smith Jr. or Gonzaga's Chet Holmgren might be the ones atop Orlando’s list. Holmgren went No. 2 to Oklahoma City, and Smith No. 3 to Houston.

Weltman hinted earlier in the week that reports might have been wrong, even boasting that the Magic pride themselves on keeping big decisions like this a surprise.

They pulled it off, too.

“I think that it it’s important that people know that information is managed discreetly with us from every corner of this business, from agents to other teams to the media," Weltman said. “And obviously, when you’re playing poker, you don’t put your cards on the table, right?"

This was the fourth time that Orlando made the No. 1 selection. If history holds true, Banchero is going to have a long career in this league.

The Magic took Shaquille O’Neal with the top selection in 1992. Chris Webber was the No. 1 pick by Orlando in 1993, and he got traded that same night for Penny Hardaway and a package of future picks that eventually led to Vince Carter and Mike Miller. And in 2004, the Magic selected Dwight Howard with the first pick.

Miller has his fingerprints on this pick as well: He’s been working with Banchero in recent weeks, getting him ready for the NBA grind.

Now, it’s Banchero’s turn to be the prized rookie, after Orlando decided to choose him over the two other highly touted candidates for the No. 1 pick — Smith and Holmgren.

Banchero also became the 13th consecutive player to get drafted No. 1 overall after just one year of college.

Believe it. The Magic are betting a big part of their future on the 19-year-old.

“Our team got a lot better tonight," Weltman said. “Paolo hasn't played one minute in this league yet and everything that he gets, he's going to have to earn. Obviously, he has a tremendous future, tremendous future, in front of him."