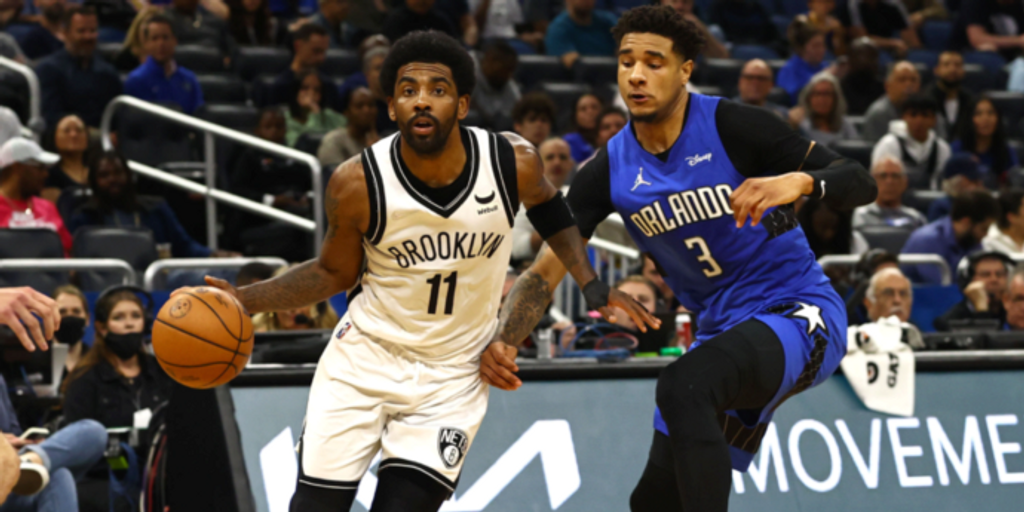 Orlando, Fla. (AP) — Kyrie Irving scored a career-high 60 points, most in the Nets' NBA history, to lead Brooklyn to a 150-108 victory over the Orlando Magic on Tuesday night.

Irving shot 20 for 31, including 8 of 12 on 3-pointers, in 35 minutes. He made 12 of 13 free throws in matching the highest-scoring game in the NBA this season, done just a night earlier by Minnesota's Karl-Anthony Towns against San Antonio.

Irving scored 41 points in the first half, the most in the first two quarters since Kobe Bryant had 42 against Washington on March 28, 2003.

The guard left the game after hitting a long 3-pointer with 8:33 remaining and Brooklyn leading 128-94. He gave the Nets consecutive 50-point performances, after Kevin Durant had 53 on Sunday against the New York Knicks.

How many different ways did Kyrie get buckets en route to his career-high 60 points?? pic.twitter.com/xNhdil1V7C

Cole Anthony had 19 points and seven assists for Orlando.

Playing in only his 19th game of the season because he isn't eligible to play home games because of New York City's mandate requiring vaccination against COVID-19, Irving reached the 50-point mark by spinning a layup off the glass with 5:02 left in the third quarter.

It marked the sixth 50-point game of his NBA career and the 16th 50-point game in the league this season, including two apiece by Irving, Durant, LeBron James of the Los Angeles Lakers and Boston's Jayson Tatum.

He went on to pass Deron Williams' Nets record of 57 points.

Nets: Brooklyn shot 16 for 27 from 3-point range. . . . G Cam Thomas (back contusion) did not play, and G Seth Curry (left ankle) missed a second straight game. Coach Steve Nash said both players might be available Wednesday night against Dallas. ... The Nets won three of four against the Magic this season. Neither Durant nor Irving played in the loss.

Magic: G Jalen Suggs did not play for the third time in five games after re-injuring his right ankle on Sunday night. ... The Magic announced that F Jonathan Isaac will not play this season, marking the second straight season Isaac has missed entirely since tearing his left ACL on Aug. 2, 2020.