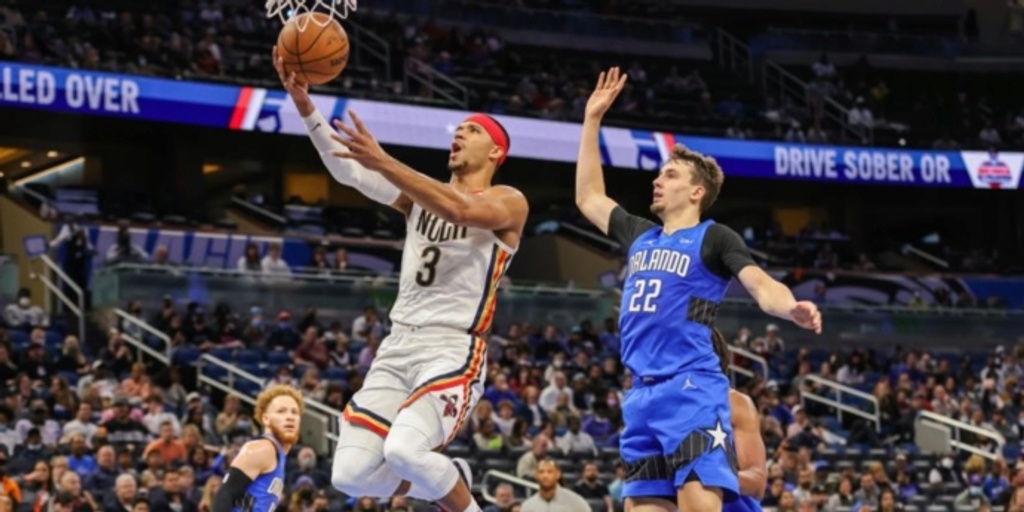 Brandon Ingram scored 31 points, Josh Hart hit two clutch 3-pointers in the second half to thwart an Orlando rally, and the New Orleans Pelicans beat the Magic 110-104 on Thursday night.

The Pelicans have won four straight and five of six. New Orleans started the season 1-12 but is 11-9 since.

“What it really says is how much they trust in each other and trust in the coaching staff,” Pelicans coach Willie Green said. “They just trust what we’re doing and we take that seriously. We come in with a consistent message — win, lose or draw — that this is how we’re going to play. The guys are buying into that.”

Hart scored 22 points and hit two straight 3s after Orlando had climbed within 93-90 with 5 minutes remaining. Devonte Graham added 20 points and five 3-pointers for the Pelicans, who improved to 6-12 on the road. Ingram hit 12 of 23 shots and topped 30 points for the fifth time this season.

“Thank God we got the lead to 20 early because they just kept chipping away and getting stops,” said Graham, whose final 3-pointer came after Orlando got within 99-97. “But (Ingram) does what (Ingram) does and Josh was making big plays and hitting shots and everybody off the bench was contributing.”

Cole Anthony returned after missing three games with a sprained ankle to score 22 points for the Magic, who also got 22 points from Gary Harris. Franz Wagner scored 20 points and Wendell Carter Jr., who had missed the previous two games with a right leg strain, had 17 points and 12 rebounds.

Orlando’s only lead of the night came at 2-0. New Orleans led by 12 at halftime, and Ingram scored the Pelicans’ first 12 points of the second half to extend the advantage to 65-45.

Later, Ingram made the Magic pay for trapping him by finding Hart and Graham for open 3s.

“They started to blitz Brandon and he did a good job of getting off the ball and making the simple play,” Green said. “Our shooters knocked down some big shots for us.”

“Ingram came out hot early and we made our adjustments to get it out of his hands, and that got us turned up a little bit,” Orlando coach Jamahl Mosley said. “What we were trying to avoid (was) giving up the 3s. But that’s what happens sometimes with the traps.”

While Jalen Suggs has been out of action the past three weeks with a fractured right thumb, Wagner, the Magic’s other first-round pick, has thrived for the injury-ravaged team.

The No. 8 overall pick out of Michigan came into Thursday ranked third among NBA rookies in scoring (14.9 points per game), fourth in steals (1.1) and seventh in rebounds (4.7).

“The thing that sticks out the most, other than his IQ, is his competitive spirit,” Mosley said. “He wants to do things right at all times and he’s hard on himself. It’s his IQ and that competitive edge that he carries.”

Pelicans: Already hit hard by injuries, New Orleans took a few more hits on Thursday with starters Jonas Valanciunas (non-COVID-19 illness) and Nickeil Alexander-Walker (health and safety protocols) and reserve Naji Marshall (protocols) out of action. Valanciunas came into Thursday second in the NBA in rebounds and first in second-chance points per game.

Magic: Mosley said R.J. Hampton is out of the health and safety protocols, but won’t return until he gets in time to work on his conditioning. ... Actor Chase Stokes (“Outer Banks”) and former Magic point guard Carlos Arroyo sat courtside.

Magic: At Miami on Sunday night.